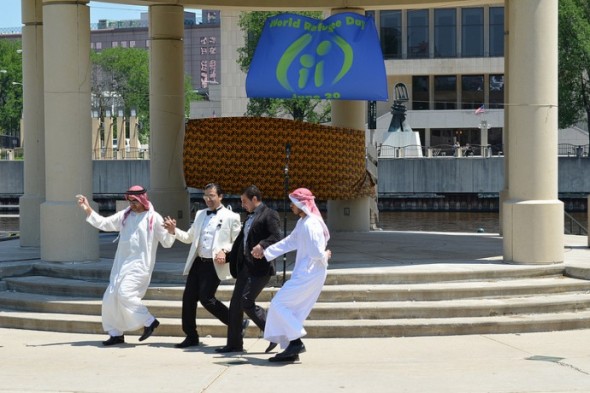 The largest World Refugee Day celebration ever held in Milwaukee raised awareness about refugees in Milwaukee with cultural performances and speakers at Pere Marquette Park.

About 125 performers and revelers came to the event, sponsored by seven local organizations.

“This is the first time we’ve had this collaborative event. We thought we’d do something on a larger scale and bring people together,” Anna Bierer of Neighborhood House said. “We wanted to highlight the contributions that the refugees bring to Milwaukee.”

Past Refugee Day events in Milwaukee have typically been smaller and organization-specific; for example, in the past Jewish Family Services has celebrated with its campers.

Other sponsors included Catholic Charities USA, the International Institute of Wisconsin, Lutheran Social Services, Neighborhood House Milwaukee, Pan-African Community Association and the Wisconsin Department of Children and Families, all members of the consortium.

Torbica said she hopes the larger celebration in Milwaukee will continue. “I think it was done nicely in the downtown area and we should do it every year,” Torbica said. 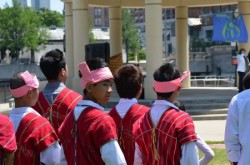 Multiple cultural performances entertained the attendees, who could sample ethnic fare from Timbukto To Go, one of the three food trucks at the event. Senegalese drummers from the Pan-African Association, an African fashion show with ensembles from Burkina Faso, Uganda and Rwanda and dancers representing Hmong, Iraqi, Karen and Karenni cultures were among the performers.

Snow Paw, a 15-year-old Karen dancer from Burma who has been in the U.S. for three and a half years, was excited to perform. Her community group had been practicing for about a month for the celebration.

“We have to know each other and then we can be friends,” Paw said of the different groups represented at the event.

Between performances, speakers from the sponsoring organizations and related groups addressed the audience, including Mette Brogden, the state refugee coordinator from the Department of Children and Families. Brogden said the U.N. recently said the world has the highest level of displaced people in the past 25 years.

More than 70,000 current and former refugees live in Wisconsin, and 95 percent of them have achieved economic sufficiency, according to the Wisconsin Department of Children and Families website. Brogden said that most refugees in Milwaukee are from Burma, Somalia, Iraq and Eritrea.

“Millions of people are moving from here to there from violence, from wars, trying to find refuge, find a secure place for their family and themselves,” said Anwar Sallumi, refugee programs coordinator at the state refugee office in Madison. Sallumi, who helped coordinate the event, is a refugee from Iraq who came to the U.S. about five years ago.

Al Durtka, president of the International Institute of Wisconsin, said the event was a celebration, but it did not neglect refugees around the world who are still not settled.

“This … is a recognition of the plight of 42 million refugees waiting to return home or find a new home,” Durtka said.

Charles Vang, president of the Hmong Wisconsin Chamber of Commerce, told the group that he came to the U.S. in 1978 from Laos with his cousins. After living in Washington state and Denver, he moved to Wisconsin because of the available public assistance.

“I went to school in Milwaukee here for three years, worked my way up, studied, educated myself,” Vang said.

He added that refugees make important contributions to Milwaukee. “Refugees contribute culture, arts to Milwaukee as well as Wisconsin,” said Vang. “Refugees are human capital, human assets. In Milwaukee, we have many great assets [because of our diversity].”

Kalyani Rai from the University of Wisconsin-Milwaukee School of Continuing Education told the audience about educational opportunities offered by the school, which first helped Russian and Hmong refugees but now works with many different ethnic groups.

“I came here because the refugees are the source of inspiration for our work at the university,” Rai said. “We have so much to learn from their experiences and wisdom in Milwaukee and in Wisconsin.”

Sarah Urban and Alexis Short dropped by on their lunch break.

“We work nearby and saw the tents and heard the music and were curious, so we walked over,” Urban said. The women were unfamiliar with World Refugee Day and thought the celebration was interesting. “We’re learning about this as we’re here,” Short said.

“This will tell the people in Milwaukee about refugees in neighborhoods. It helps us reveal our presence,” Oliver said of the event. “It also shows solidarity with the rest of the world.”

Torbica, a refugee from the former Yugoslavia, said the day was wonderful. Sallumi agreed.

“It’s a good opportunity as refugees to raise awareness in our society that there are people who speak different languages and are from different countries that are here in Milwaukee, here in Wisconsin,” Sallumi said.