Graphic designer Diane Murphy lives and works in the Third Ward and can't resist promoting it to visitors. 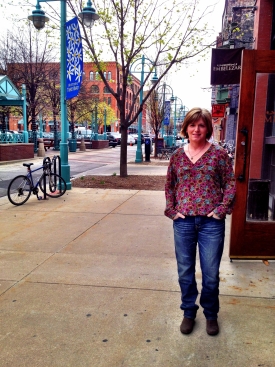 Diane Murphy  is something of an ambassador for the Third Ward neighborhood where she lives and works.

“I have always tried to be helpful to anyone who comes down. I am always giving directions or recommendations. I just try to promote the area because I like seeing people down here.”

If there is something to do in the Third Ward, Murphy has done it. She frequents spots such as Spin Milwaukee, the Public Market, the theaters, and Fore!, an indoor virtual golf range. “It’s such a unique place to live. Everything’s within walking distance.”

Murphy is a graphic designer for Interior Systems Inc in the Historic Third Ward, and lives just a block from work.  The company offers a variety of design solutions, from customized chairs, booths and breakfast carts to ceiling banners, menu boards and murals.

Murphy helps design environmental graphic art for restaurants and other businesses. She has a lot of creative freedom in her work, and can show up to work in shorts and flip-flops. But she got into the profession in an unorthodox way. 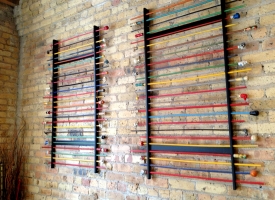 One of Diane’s most possessions is her collection of carnival canes, some that date as far back as the early 1900’s. Photo by Joe Horning.

Where most artists today started their career with knowledge of Adobe Photoshop and Illustrator, Murphy taught herself those programs almost 15 years into her career.

“I’ve had no formal training. I taught myself everything. It all happened when a friend of mine was building a website and she needed a designer for it. So I went and learned the entire Adobe collection, which just opened so many doors.”

Born in Janesville, Murphy has always had a passion for art. She attended Carroll College and graduated in 1983 with a degree in fine arts. She’s held a number of jobs, working as an artist-in-residence for Templeton Middle School, as well as other local high schools. She also worked as an illustrator for the Milwaukee County Zoo. 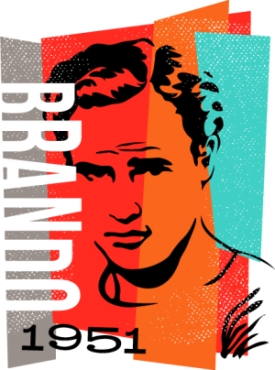 With her love of classic movies, Diane has drawn many famous classic actors and actresses, such as Marlon Brando.

In her side time, she worked as a photographer. In the early 90’s, before the age of digital cameras, Murphy built a darkroom in her basement. To this day, she still feeds into her love of photography. She even had a side job building furniture to make extra money. Later in the 90’s she worked as Art Director for the glossy Exclusively Yours magazine.

In 2002, while teaching art classes at a studio in Wauwatosa, Murphy answered an ad for a mural painter position with Interior Systems. When she took the job, their offices were in Fond du Lac, and she commuted every day from Wauwatosa. She has fond memories of working with a group of artists at the company, hand-painting murals for McDonalds. As the company transitioned to digital works, and later moved their offices to the Third Ward, Murphy made both transitions as well. 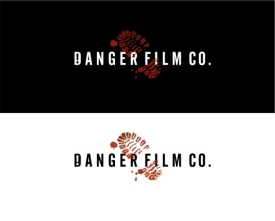 One of the many logos Diane designs for fun in her free time.

Her move to the Third Ward was something of a surprise. “My partner Amy and I were just exploring the Third Ward. We were not looking for an apartment or condo. But we just happened to find our way into an open house for a condo. As soon as we looked inside I turned to her and said ‘I want to live here.’ It was such a gorgeous place.”

In the nine years she have lived there, Murphy has grown more attached to the area. “Back then, there were almost no stores or people here. It has changed so much, it’s awesome. I mean for major grocery shopping I have to go outside the Third Ward, but it’s so nice to have a lot of places nearby.” 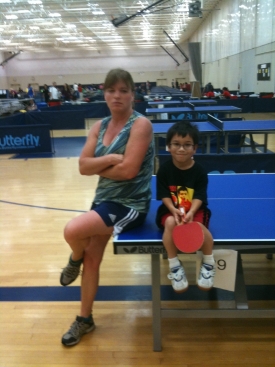 Diane once competed in a regional table tennis tournament, and lost to this nine year old.

She also likes living near work. If a situation arises at home, such as something with her dogs, she can easily walk back home to handle it.

One of her pet peeves is the Pedal Tavern, the local drinking attraction that goes through the Third Ward. While she likes seeing people coming there for a fun time, having a large group of loud drinking people go by every five minutes on a Saturday can be extremely annoying. She also dislikes not having a normal grocery store or pharmacy nearby. “It’s kind of annoying to have to drive away just to get a box of Tide at 8 at night.”

But those minor peeves won’t stop her from giving directions or promoting the neighborhood the next time she encounters questions from newcomers.