And Justice For All?

The Milwaukee Justice Center has created a unique legal clinic for the poor. 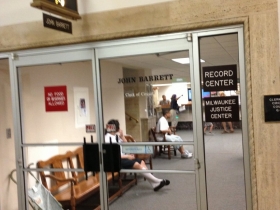 Greg Anderson had gone to his ex-fiance’s house to settle an argument but she wouldn’t come to the door. Frustrated, he knocked hard enough on a window to break it. “It wasn’t intentional, but it broke,” he recalls. He later wrote her a note of apology he slipped under the door. But she went after him legally. Anderson faced a small claim against him and even a possible charge of criminal damage to property, but he couldn’t afford a lawyer. That’s where the Milwaukee Justice Center came in.

Located on the first floor of the Milwaukee County Courthouse, the Justice Center is a free legal clinic exclusively for the poor. Five years ago, after the 150th anniversary of the Milwaukee Bar Association, some of its members decided to create a project to begin to address the nationwide problem of underrepresented people getting little or no help when dealing with the courts. The result was the Milwaukee Justice Center, a public-private partnership between the Milwaukee Bar Association, Marquette Law School and Milwaukee County created in 2009.  Since then, the center has provided free help to over 30,000 county residents.

While the courts appoint lawyers for serious criminal charges, no representation is provided for civil charges: small and large claims, divorce and child custody issues, landlord-tenant disputes, probate cases and home foreclosures. This gives those who can afford a lawyer a huge advantage. Those who can’t end up going “pro se.” 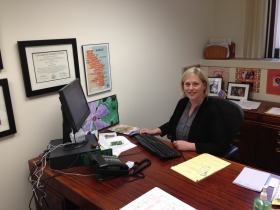 “The courts refer to these people as self represented litigants,” says Dawn Caldart, executive director of the Milwaukee Justice Center.  “I like to call them unrepresented litigants because that’s really what they are…Self implies a choice. Most people are doing it because they can’t afford a lawyer.”

The center offers a two-part system to help clients prepare themselves for non-felony cases.  It offers both a walk-in clinic for practical help and brief legal advice clinics where residents can get their questions answered and begin to form ideas for trial.  Law students and lawyers who volunteer their time and expertise run the clinics.

The center’s services are available to anyone earning less than 125 percent of the federal poverty guidelines. In 2012, almost 80 percent of those served made less than $2,000 per month. Sixty percent were black, 21 percent were white, and 13 percent were Latino.  Most clients resided in the poorest areas of the city.

“What the justice center did for me was help me with the paperwork,” says Anderson. “Without that I would probably be running around like a chicken with my head cut off.”

Handling legal forms is the main work of the walk-in clinic, run mostly by Marquette University law students.  The volunteers identify which forms are needed for specific cases, help the client fill out the forms, tell the client how to file the forms, and tell them how to use the forms when dealing with the other party.

Oftentimes, given the financial situations of clients and the personal nature of the cases brought to the center, emotions run high.  For volunteers, this can be difficult to deal with, as law student Danielle LeMeiux learned through her volunteer work at the center.

“At the end of the day, when we (volunteers) are sitting here among ourselves, it is really hard because you will bring up the stories going, ‘oh I was heartbroken for this person’ or, ‘I was so frustrated’ because you wish there was something more you could do for the person,” she says.

Without the help from these volunteers, many people would go unaided into the courts, virtually guarantying a poor outcome for them.  This also leads to the courts running inefficiently because these clients are ill-equipped to fulfill the requirements of the justice system.  Anderson appreciated the patience and determination of the volunteers at the walk- in clinic.

“It was close to four when I came, folks we’re getting ready to go home, and they were like ‘okay I’ll help him,’ and they took me to the back and they worked with me,” he says.

Thursdays and Fridays are the days designated for brief legal advice.  That is when attorneys from Foley & Lardner, Michael Best & Friedrich, Quarles & Brady, Hinshaw & Culbertson and other law firms team up to help minimize the inequality of access to justice.

“All of these attorneys are coming in here and volunteering their time,” says Caldart. “These are high-level attorneys that are coming in and working with clients face-to-face to help them with their problems.”

In 2012, law students and attorneys provided almost 9,000 volunteer hours at the justice center, up 17 percent from 2011.  The value of these hours is approximately $777,000.  But the value comes not just for the clients. The clinic also provides a kind of education to the volunteers.

“It definitely puts a perspective on things, especially having grown up in Milwaukee,” says Katy Seeley, another Marquette University law student who just finished her first year.  “I’ve lived 20 minutes away from this building my entire life and I had no idea what goes on.”

LeMeiux has had family members who needed help accessing the justice system and was aware that people often can’t get the legal representation they need. But working at the center truly opened her eyes to the gap between high and low-income people in the legal system.

“It’s strengthened my resolve to do work like this after I graduate,” she says. “One of the main reasons I went back to law school was to make a difference. And being here has made me realize there is definitely a need to be filled, whether that is through pro bono or volunteering at clinics like this or starting new clinics. There needs to be more of this type of work being done to help people.”

Recently, representatives from the center made a presentation about their unique public-private legal clinic at the National Equal Justice Conference. Caldart and her assistants hope the program they’ve created can become a national model for how to provide legal help for those in need.