How to Go Green

Expert panel at a Project Milwaukee conference agrees Wisconsin needs to improve, but disagreed as to how.

Wisconsin has fallen behind neighboring states in embracing clean energy and needs to improve its performance. That was the general message that came from panelists at WUWM’s “Project Milwaukee: Power Switch Forum” held June 10th at Discovery World. Where they disagreed was on how to achieve this progress. 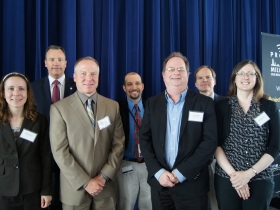 The current focus on clean energy represents a societal change, Radloff noted.  “We built a legacy economy around high carbon energy sources. The Industrial Revolution built up manufacturing and economies driven by coal and oil.”  And we’ll probably never leave them completely behind, he added.

McGinnis described Wisconsin’s current energy industry as a “portfolio of solutions that moves the economy forward,” with an emphasis on energy efficiency: solutions like smart grids and demand response that reward consumers who time their energy use to reduce peak demand.

Hesslebach agreed that conservation and efficiency are getting the most emphasis,  largely because new technology start-up costs are very high.  In a follow-up interview with Urban Milwaukee, Hesselbach said that in 2000, We Energies got less than 2 percent of its energy from renewable sources. That will rise to 8 percent when it completes its current biomass project, but will cost the utility $930 million to get there.

Content pointed out that when people say “clean energy,” some, like McGinnis and Hesselbach, are really talking about energy efficiency, while others, like Shahla Werner of the Sierra Club, are talking about new technologies.  But Werner said “we’ll take a diverse portfolio of solutions, “ noting that efficiency can be done by anyone,  creates the most jobs, and is hard to outsource.  “The kilowatt hour we never use is our first line of defense,” she explained.  But, she adds, “We can do better on all these fronts.”

Content provided statistics that backed up that point: although Wisconsin ranks 19th among all states in the green rankings by the Clean Tech Leadership Index, it’s last among its regional peers.  The index ranks Illinois 8th, Minnesota 9th, Michigan 12th and Iowa 18th. Of the country’s top 50 metropolitan regions, Milwaukee is in 15th place, again behind Chicago (12th) and Minneapolis (14th).

That position is especially disappointing for Wisconsin native Werner, who was proud that her state was one of the first to set a renewable energy standard when the legislature passed Act 141 in March of 2006 and required that ten percent of the state’s energy come from renewable sources. Now, she says, “we’re falling to the bottom of the pack.”

As to solutions, much of the discussion focused on the relationship between government regulation and free market innovation.

Current energy laws, explained Radloff, are remnants of the 1930s, when the need for rural electricity infrastructure prompted policy makers to allow regulated energy monopolies. Those utility companies then, “built a rate case around that infrastructure.”   Inviting innovation and market-based solutions into the energy industry would require those regulated monopolies to allow new companies into the market, soomething that Content said utility companies are uncomfortable with.  Hesselbach defended We Energies record, pointing that the company’s renewable sources are purchased through third party bids.

Werner of the Sierra Club says that the longer Wisconsin hesitates to raise its clean energy standards and thereby prompt needed innovation, the more costly it will be in the end.  “In the future, does Wisconsin want to have these resources installed locally, installed by local resources, or do we want to have to buy these products and install transmission lines?  [Do we want to] buy these products from China?”

McGinnis favors increasing the renewable standard, but added “If you move it to 15%, it’s still only 15%.”  He returned to his assertion that the foundation of Wisconsin’s clean energy future is efficiency.  “If you drive through Milwaukee, it’s right in front of your eyes.  We have old building stock” which could benefit from energy efficient retrofitting.  Another good solution would be solar panels, he added, which Johnson Controls can provide.

First generation technology is expensive, Radloff conceded, but there’s been continual improvement over the past 30 years in technologies like solar panels, wind turbines and anaerobic digesters (that turn waste, like cow manure, into energy).  Already, he warns, we’re behind European Union standards, articulated in their 2008 directive in a “very elegant and very clear policy: 20/20/20. Twenty percent renewables, twenty percent increase in efficiency by 2020.” Once the standard is set, it’s up to each country in the EU to figure out how to achieve it. That the United States has not set any renewable energy goals, he says, “is an embarrassment in my book.”

“There tends to be criticism when government tries to pick winners and losers,” Erwin noted. But, what government can do is, “identify the objective and allow others to figure out how to get there.”

Teich asked the panelists if the free market was entirely responsible for the successful Toyota Prius? Content answered that it was a great example of both government policy and the free market.  The market developed it in response to the governments setting of emissions standards.  Radloff compared the innovative Prius to hydraulic fracking.  Although everyone now perceives fracking as a new technology, the recent boom, “would not have happened without 30 to 40 years of research and support.”

Public policy, Hesselbech pointed out, “is throughout the energy industry,” and the two sectors together can produce solutions.  “The other thing about policy,” he added:  “It includes all individuals.  Economic fairness among all customer classes is something we think needs to be part of the project.”

A great example of such a public/private partnership, panelists agreed,  is Milwaukee’s Me2 Energy program.  Run by the City of Milwaukee and funded by federal Reinvestment Act dollars, the program provides energy assessments for city residents.  It’s improved 600 homes and 147 businesses, said Johnson Control’s McGinniss, whose company provided some of those efficiency products so that individuals and business could save on the energy provided by utilities like We Energies.

Looking forward, says Radloff, the most promising technologies for Wisconsin will be solar, biomass and biogas because they’re especially well-suited to agriculture.  Wind  probably won’t make a big contribution, he says, “because of the way the wind blows in Wisconsin.”

When the discussion was opened to audience questions, the first was about the efficacy of a carbon tax on fossil fuels.  First, responded Radloff, “we have to figure out how to capture carbon usage.”  The carbon tax could then replace the current system of cap and trade, which “can be gamed.”  The tax is simpler and puts a dollar value on carbon.  “I think it’s inevitable.”

Because the Sierra Club supports the current system of cap and trade, Werner made it clear to the audience that her response was a personal one, but she also believes “people are gaming cap and trade,” and a carbon tax would rectify that. McGinnis says Johnson Controls already takes a carbon tax into account when it puts together products for their clients.

Through audience questions the panel was also able to clarify that We Energies does buy energy back from customers who produce it using solar panels, but because it replaces energy the company buys in bulk on the market, the payments do little to defray the start up costs of a homeowner’s solar panels.  Audience members Matt Howard, the Sustainability Director for the City of Milwaukee, and Kevin Miller of Orion Energy and the former mayor of Manitowoc, both expressed frustration with the monopoly that utility companies have over rate setting. Howard stressed the need for a “real conversation,” about whether the market exists to serve the monopoly or to serve the ratepayer.

Hesselbach defended We Energies, pointing out the reason why utility companies are regulated monopolies.  In the beginning of rural electrification, he noted, “Having separate poles and wires…didn’t make sense.  If you reached the point where you could have a biomass box in your basement, then anyone can build a house and generate their own energy.  But to have consistent service, even if it’s just a back up, there will be a role that will be regulated at some level.”

“I can’t resist,” said Radloff, jumping into the conversation, throwing his arms out and cupping his hands around imaginary dials.   “This is the image of what needs to occur—we need to dial one [utilities] down and dial one [other energy innovators] up.  As a society, we’ve invested a lot in [utiliies].  It doesn’t behoove us to put them in financial risk….I don’t think we should continue bad policy that punishes utilities for innovation.  That could cause instability.”

Audience member Liz Nelson, sustainable products expert for ProSource Floor Covering, asked panelists if they’d heard of system thinking. Radloff pointed out that system thinking was exactly what his university was trying to do by bringing researchers together and “trying to solve the whole problem and not just silo it.”

The energy world, Radoff believes, is going to start looking like the technology world.  The shift, added McGinnis, “really began after 9/11 and Katrina when the nation’s governors took control of energy independence.  It’s shifting again and individuals,” empowered by new and more accessible technologies, “are taking control.”

But is that shift happening fast enough? asked audience member Tom Brandstetter of the First Unitarian Society of Milwaukee.  “We must get to an 80% reduction of Co2 by 2050.  I’m not seeing any urgency on getting there.  Are we taking that seriously?”

It’s been talked about at the policy level, said Radloff, though he agrees not seriously enough. The utilities do listen to their ratepayers, he noted, and those ratepayers are starting to demand change. Where will that paradigm shift lead Wisconsin and the nation? As Radloff put it, “We all have to contribute to creating energy.”

One thought on “How to Go Green”