The Art And Artisans Behind The Sugar Maple

The Sugar Maple offers one of the best beer selections in Milwaukee. 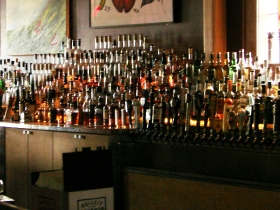 The taps. Photo by Nastassia Putz.

Indicating its main function and stating the obvious, co-owner, Adrienne Pierluissi says, “It’s all about the beer.” However, there’s a lot more behind this establishment then that which tickles the palate.

Pierluissi and her husband, Bruno Johnson, decided not to invest in selling popular domestic draft beers. She even admits to being a little nervous in the beginning on how the concept would go over, but as it turned out, it helped them snag a few regulars. It was even rated No. 1 beer selection in Milwaukee in 2009 by the Shepherd Express.

“Seeing the wall of taps for the first time was awe inspiring,” says Sugar Maple regular and craft beer enthusiast, Andrea Payan. She and her husband, Ramon, have been coming in for the past two years and appreciate the different beers.

“I started going as soon as they opened their doors,” says Payan.

Previously, the building housed the Sikh Temple of Wisconsin in the late 1990’s and was a bank in the late 1930’s, early 1940’s. Today, the structure still has some physical attributes remaining from both of these former occupations.

One fun fact and quirky design feature inside the establishment is the bathroom area. It was once a bank’s safe and is situated behind 16 inches of reinforced concrete. “Probably one of the safest places in Milwaukee to be in case of a hurricane,” says Pierluissi chuckling. “What a place to get stranded!” 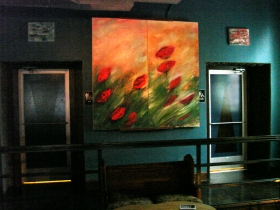 The bathrooms. Photo by Nastassia Putz.

Well, why not? The bar has plenty to drink in case of an emergency and lots of big paintings to look at to keeps one’s mind busy.

The current pieces hanging on the walls are some of Pierluissi’s work, which were created using oil paints, mops, brooms and rags. “Anything that covers space,” says Pierluissi, who for the last 10 years has contently embraced abstract expressionism.

Pierluissi and Johnson have roughly 50 years of bartending experience combined, which they have successfully obtained alongside pursuing their passion for the arts. For 15 years, Johnson has owned a record label called Okka Disc and Pierluissi, now 45, has painted since she was 19.

In fact, she remembers her days as a bartender secondary to her chosen medium. “I was never a 9 to 5 person,” says Pierluissi, “I needed to find time to paint.”

Approximately five months after they met, they were married. “I picked him up at the Hopleaf Bar in Chicago,” she frankly admits. Then a few years later, Johnson decided he wanted his own bar business, so they tossed out names of various cities until agreeing upon Milwaukee. In June 2003, they opened their first bar, the Palm Tavern.

The Sugar Maple came five years later when they decided to lease the current location. It opened in April 2008 after 5 months of renovating the space. With the help of their contractor, Mike Sherwood and carpenter, Mike Jung, they put up walls, built a floor and created a 60 ft. long bar. 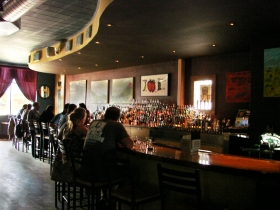 Pierluissi designed the bar top herself originally on a cocktail napkin. She also created the benches that were put in this past April with what she calls her “silly drawings.”

“I just wanted to throw magic dust on it and make it come up,” she says recognizing her inability to physically construct them without the help of Jung. “It’s not my medium,” she notes. Therefore, Jung stepped in and tackled the 4-week-long project.

Like the curvy, organic bar top that allows one to socialize and peruse the whole bar without straining one’s neck, the benches were devised to encourage communication, says Pierluissi. That is also why the bar has no televisions.

She wanted to create an atmosphere that was “community oriented” and chose “a modern (not cold) and sleek way” to do so. Her ever-changing set of paintings do aid in this attempt and she even transformed the basement into an art studio in 2010 so she could spend 2 to 5 days a week bouncing from one to the other.

“I think it feels really cozy with the low lighting and the furniture,” says Payan. She finds the bar aesthetically pleasing and is able to strike up conversations with other patrons quite easily.

Bartender Joshua Stelmaszewski says, “its not your average anything from the alcohol choices to the atmosphere to the clientele.” And Pierluissi agrees. She says the patronage is roughly 60 to 70 percent women, as well as people from very diverse backgrounds.

And yes, women do like beer. “They’re not just drinking the Raspberry Tart,” says Pierluissi, “they have very fine palates and can tell when a beer is off before a guy can.” “I love it when they find a beer they can really enjoy.”

Stelmaszewski finds that the events are also something worth noting. The next one coming up is Okka Fest 5 (June 21-23) featuring several different musical performances like Melaku Belay Fendika— a group of traditional musicians and dancers from Ethiopia—held at the Sugar Maple and Palm Tavern.

So it’s not only about the beer. “It’s about providing a space where people are safe to come out and socialize,” she confirms.

The Sugar Maple houses their love for the arts and local clientele, which leaves Pierluissi with no desire to change a thing. 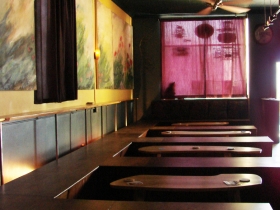 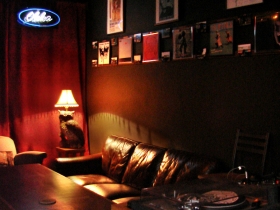 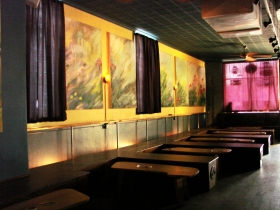 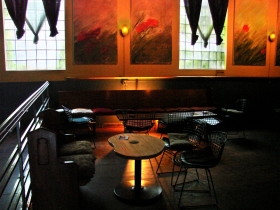 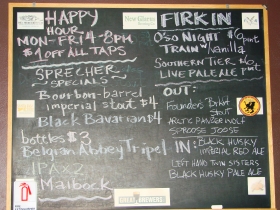 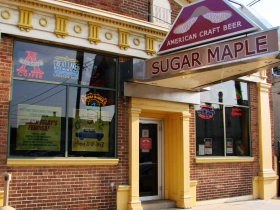 One thought on “Taverns: The Art And Artisans Behind The Sugar Maple”