After the cryptosporidium crisis city became a national leader, whose system tests for more than 500 chemicals.

By Marion Ceraso, Wisconsin Center for Investigative Journalism - May 22nd, 2013 10:35 am
Get a daily rundown of the top stories on Urban Milwaukee 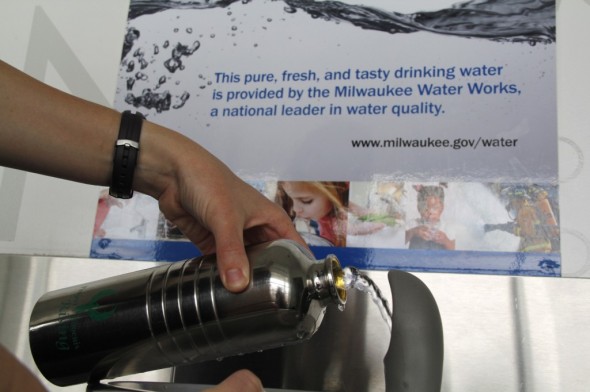 Two decades since a parasite in Milwaukee drinking water killed 69 people and sickened 400,000, the city has become a national leader in testing for unregulated contaminants. Kate Golden/Wisconsin Center for Investigative Journalism

For the public officials who safeguard Milwaukee’s water, Cryptosporidium changed everything.

Two decades ago, the parasite passed through the city’s Howard Avenue water treatment plant and reached city taps. The outbreak resulted in an estimated 400,000 cases of gastrointestinal illness and at least 69 deaths.

It was the largest waterborne outbreak recorded in U.S. history.

Since the outbreak, the city’s water utility, which draws its supply from Lake Michigan, has invested $417 million in improvements to infrastructure, monitoring and treatment.

Some of these chemicals are endocrine disruptors, which can interfere with hormones and derail human and animal growth and development, even at extremely low doses.

“Our testing is a legacy from Cryptosporidium,” said Carrie Lewis, Milwaukee Water Works superintendent. The outbreak “made us realize that we were in the public health protection business.”

Contaminants get into water through storm runoff, industrial and agricultural discharges and sewage from homes, including medications that are flushed down the toilet or carried along in human waste.

In 2012, none of these chemicals was detected. Both years, chloroform and other regulated byproducts of the water disinfection process were found well below allowable concentrations.

“I don’t think there’s any documented public health significance or importance that has been tied to the detection of these compounds,” said Lon Couillard, Milwaukee Water Works’ water quality manager, of the unregulated chemicals.

The utility’s website echoes that view: “Science has not demonstrated any impact on human health at the trace levels these contaminants are being discovered.”

Couillard said year-to-year shifts in emerging contaminant levels are not likely to be significant, given the potential for errors while testing at the very low concentrations their laboratories must use.

Establishing a baseline and monitoring the data over many years is important to understanding which contaminants might be considered a risk, Couillard said.

Lee Boushon, chief of the Wisconsin Department of Natural Resources’ public water supply section, said the vast majority of water systems focus only on a standard list of 91 contaminants regulated by the U.S. Environmental Protection Agency.

“It’s certainly forward-looking for Milwaukee to monitor for additional contaminants beyond that list,” Boushon said. 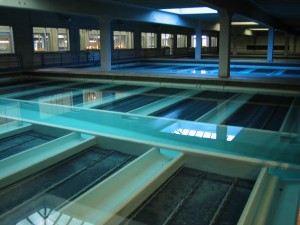 Since the Cryptosporidium outbreak of 1993, Milwaukee has made numerous improvements to its drinking water treatment. An $11 million project extended the Howard Avenue water intake 4,200 feet to a distance of two miles off Lake Michigan’s shoreline, beyond the path of contamination from the city’s industrial harbor.

As the lake water rushes into the plant, it enters a nine-step treatment process that includes disinfection with bubbling ozone gas, sedimentation and filtration. It is then deemed “pure, safe and delicious” by Water Works.

At the other end of the city’s water system, the Milwaukee Metropolitan Sewerage District tested a state-of-the-art sewage filtration system. The goal was to catch emerging contaminants resistant to removal by conventional wastewater treatment along with phosphorus, a nutrient that contributes to algae blooms and fish kills.

A science in its infancy

But while technology has evolved to detect emerging contaminants in water at increasingly tiny concentrations, water managers across the nation still do not have good answers for the public on how much risk they pose to human health or the environment.

Most of the 80,000 chemicals in commercial use have not been tested for safety, according to the Pew Charitable Trusts.

“There is mounting concern across the U.S. about the impact of trace organics, such as hormones and pharmaceuticals, in our water systems and the potential threats they pose to human health, wildlife and the environment,” said Rebecca Klaper, associate professor at the University of Wisconsin-Milwaukee’s School of Freshwater Sciences, in a press release on the sewerage district’s filtration study.

Exposure to these chemicals has been associated with changes in sexual behavior, population declines, early or late puberty and malformed reproductive organs in animals.

But the explosive growth in production of endocrine disruptors, their almost universal presence in air, water and soil, and the variety and complexity of potential impacts, make studying health effects in humans an overwhelming challenge.

“If you listed every chemical that binds to hormone receptors and can cause an effect, there would be hundreds of them,” said Jocelyn Hemming, an environmental toxicologist with the Wisconsin State Lab of Hygiene. “It’s unbelievable how many compounds act that way.”

Tim Bate, the sewerage district’s director of sustainability and planning, said most wastewater treatment plants are not equipped to handle endocrine disruptors, pharmaceuticals and other chemicals of emerging concern.

They generally pass “right through into the aquatic environment, and it affects aquatic organisms,” Bate said.  “I think that’s going to be bigger and bigger going forward.”