How a 29-year-old West Allis native became publisher of a new magazine. 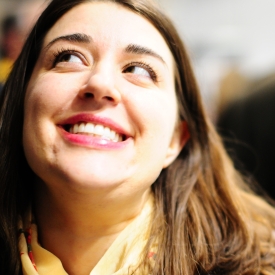 With everything else debuting in the month of May, let’s say the timing is perfect for the first issue of Edible Milwaukee to hit the stands, what with redbuds, magnolias, daffodils and tulips abloom, people riding in ragtops and sidewalk cafes booming. Dandelions scream Yellow. ‘Tis the season.

The magazine is distributed for free in restaurants, coffee shops, specialty food markets and hotels throughout the metro area, with a first run of 10,000 copies. It is locally owned but part of the Edible Communities publishing group, founded in 2002, and by now a network of 70 similar magazines in cities and regions across the country, including Madison and Door County.

The Milwaukee quarterly’s publisher, Jen Ede, is neither butcher, baker, nor candlestick maker, though perhaps her love of edibles is rooted in her great grandpa’s efforts as a baker, and well, her grandma worked in school cafeterias. Her mom’s family has been in Milwaukee since Ede’s great grandmother Gabriela Saglova arrived from the Czech Republic in the early 1900s.

There’s more: her dad’s parents came here from the Iowa farming community of Tipton, and ah yes, her paternal grandpa was an actor and an artist who worked at the post office to support his family. “It was their hard work that gave me opportunities,” Ede says.

Born in 1983, Jennifer Olivia Ede lived near 37th & Vliet, then near 60th & Center, before her family settled in West Allis where she began kindergarten and attended public schools for elementary (Woodrow Wilson) and middle school (Frank Lloyd Wright). Pius XI High School set the table for her UW-Madison 2005 bachelors in Russian Language and Literature. She went abroad and topped it off with a 2008 master’s in Russian Philology from Belarusian State University in Minsk, Belarus.

She has been living on West Juneau Avenue but will soon to move to Martin Drive on the border with ‘Tosa, into an apartment in a 1930s building, where she’ll share her love of old world charm (great molding, dark wood and updated amenities), with her beta fish, Hassan and Jafar.

Time was when she worked in Cambridge, Mass., as a personal chef for a local, roving catering company, but though it was interesting and taught her a lot about food production and sustainability, catering was not on her life menu. “Man, it was hard on the body,” she says. During this period in her life she blogged and tweeted under the name “Vintage Eats,” a name that lives on in the company publishing Edible Milwaukee. There is also a section titled Vintage Eats inside the magazine. Available via subscription ($30 annually for those who want it delivered), the magazine is otherwise free for the plucking, including at various community partner locations.

Ede says all early signs point to continued growth because Milwaukee has been waiting for just such a magazine, i.e., one that focuses primarily on area eats. The last thing she wants is for it to be tagged as an elitist foodie magazine. In fact, the magazine will also be available at area farmers markets, food pantries and soup kitchens.

We were tempted to ask if she’d ever devoured paczki, the Polish jelly donuts. Absolutely she has.. Would you believe pickles are her favorite food and she’s definitely not a fan of the Food Network? “Cooking has become a spectator sport,” she says, adding that “meanwhile we are losing the skills we need to feed ourselves.” She works out because she really likes to eat.

But though food is a big thing in her life, she’s not an urban gardener; she shops at farmers markets for her produce. She may not have a green thumb, but she supports those who do.

The debut issue, Summer/2013, is 44 colorful pages, formatted (approximately 8 1/2” x 10 l/2”) on sleek and smoothly handsome paper, just right for holding. About 90 percent of the ads (think “Community Partners”) are local, with the content shaped by local writers (John Gurda for instance) and photographers. Note: everyone gets a paycheck.

The distribution territory ranges north to Port Washington and Sheboygan, west through Waukesha county, and south to the Illinois border. It’s a hyper-local magazine, though it may bear certain similarities to other Edible publications across the United States and Canada.

The publication functions from a modest space in the Hudson Business Lounge in the Third Ward, a place where she can work and not have to buy coffee every hour on the hour. When she’s not working with her advisory panel (eight stalwarts with a passion for food), she is a full time temp, an administrator, at Briggs & Stratton.

And just so you know, “Ede” rhymes with “feed.” A good omen perchance? 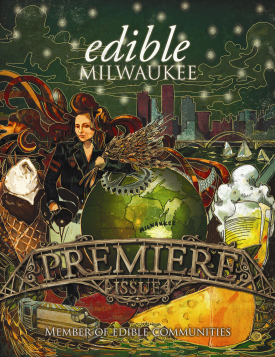 The glorious cover of the premiere issue echoes the iconic poster, “Milwaukee Feeds and Supplies the World.” A brilliant choice, it points to where we’ve been and where we’re headed.

On page 40, are re-imagined Blackstreet lyrics by Justin Johnson served up with a yummy photograph by Joe Laedtke. Call it an appetizer, but we like the way they cooked it…

“She’s got knives and fire
Beef short ribs, by the pound
Baby never cook wild, very low key on the deep fryer
Catching transfat is a “no”….