Alberta Darling says my way or the highway. Plus: the return of Jerry Kleczka! 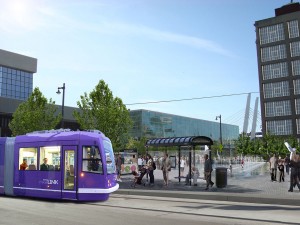 The members of the  state legislature’s Joint Finance Committee have decided for the public that utility ratepayers must not contribute to the cost of relocating utility lines for streetcar construction in the city of Milwaukee, although they do so in any number of instances for roads and other necessary public improvements. The measure was supported by Sen. Alberta Darling, the River Hills Republican whose community has absolutely no transit of any kind, and no place to go, so things are equal. “My way or the highway,” is not Alberta’s slogan — her way is the only highway, and it is populated by folks in SUVs.

However, the Republicans have no issue with the fact that WE Energies ratepayers have funded hundreds of millions of dollars of profit-making real estate developments by Wispark, the real estate development subsidiary of the electric company. Wispark is famous for constructing office parks and other such developments in exurban areas free from transit, and ideally along highway interchanges. [It has developed three properties on two blocks of W. Wisconsin Avenue in the city, including its headquarters.] Why an electric power company should be exempt from paying any portion of a development that will bring millions of dollars to the company makes no sense to me.  The streetcar, after all, will run on electricity. Having utilities participate in a robust urban economy seems to be a great investment. However, inducements remain by the score for the utility monopolies to invest all they want in Republican suburban districts that city taxpayers will have to bail out as the automobile reaches the end of its road.

Best Place at the Pabst, 901 W. Juneau, will be the site of the annual The Cream of the Cream City Awards ceremony of the Historic Preservation Commission of the City of Milwaukee. The fun begins at 5:30 p.m. on May 15th 2013, and the public is invited to attend. The awards recognize  “individuals and organizations that have made outstanding contributions in the field of historic preservation and heritage education/advocacy in the City of Milwaukee,” according to a statement from the mayor’s office, which also promises updates on the future City Hall Museum.  Let’s hope the museum’s curators will be able to preserve a part of the scaffolding that has surrounded the building for so long it now seems like original construction. 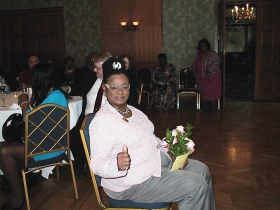 Rep. Gwen Moore gives the thumbs up to Urban Milwaukee at her birthday celebration, Sunday, May 5th, 2013 at the Milwaukee Athletic Club. Photo by Michael Horne.

Several hundred friends and well-wishers gave birthday greetings to Rep. Gwen Moore at a fundraiser Sunday, May 5th, held at the Milwaukee Athletic Club. Among the attendees were Chris Ahmuty of the ACLU, Mayor Tom Barrett, former Lieutenant Governor Barbara Lawton, Ray Vahey, Gary Goyke and many others caught up in the rousing enthusiasm of the moment. Gwen, you see, always puts on a show.

WHATEVER HAPPENED TO JERRY KLECZKA?

After the 2000 census redistricting that cost the city a seat in Congress, Tom Barrett left that institution, while his colleague Jerry Kleczka stuck around until 2005 before retiring and being succeeded by Gwen Moore. Speaking about his time in congress, Kleczka said, “You can go out feet first, and that’s not my desire, or you can say, I think we’ve served with distinction, and this is the time to go home and seek a new challenge.” Well, that was the last we heard of him, until his name popped up this week as a sponsor of “Pabst, Present and Future,” a fundraiser for the Assembly Democratic Campaign Committee to be held today, Friday, May 10th, at the Pabst Theater at 5 p.m.

The event is to introduce attendees to the freshman class members of the assembly, including Mandela Barnes, Evan Goyke, LaTonya Johnson and Daniel Riemer. Other hosts include Gwen Moore, former Sen. Barb Ulichny (who has also disappeared into the mists of time), Chet Gerlach, a consultant and president of Door County Bike tours, and Shepherd Express publisher Louis Fortis, who was once a member of the assembly himself. Kleczka now faces whatever “challenges” he now encounters from a home on Sedgemeadow Road in Middleton, Wisconsin, far from his old district in Milwaukee.

SPACES AND TRACES COMES TO SHOREWOOD

The 32nd Annual Spaces and Traces neighborhood tour of Historic Milwaukee, Inc. is heading out to Shorewood for a look at the architectural marvels of that late 19th-century commuter village. Here is a map of the locations on the tour, which includes the old Kilbourn Town Home, moved to the site from Milwaukee’s west side by those active Colonial Dames. According to organizers,  “the tour will call attention to the Village’s wide variety of architectural styles and its unique history as an early Milwaukee suburb.” Not many suburbs are worth a historic tour, but this one surely is. Non-member tickets are $30 on the day of the tour, $25 in advance. You can order online here or purchase them in person at Urban Milwaukee: The Store.

Drench Fitness Boutique is in the process of finishing its 4,000 square foot facility in the storefront of the great Germania Building, which should give passersby something to look at. Adam von Rothfelder is moving the business from 514 N. Water St. … Sen. Chris Larson and Rep. Nikiya Harris have decided to save the taxpayers some rent money by opening a joint district office, something that would be apostasy in Chicago. But the two have pooled their rent money to lease a lower level space at 316 N. Milwaukee St., where they will welcome the public with food and “thoughtful conversation” on Wednesday, May 29th.

The V Foundation for Cancer Research has filed a $30,000 claim in Milwaukee County Probate Court against the estate of the late basketball coach Rick Majerus, who died December 1st, 2012.

It’s time to get back in the saddle again, as Bike to Work Week 2013 rolls from May 13th – 19th, 2013 throughout the state of Wisconsin. The Milwaukee events [see list] kick off, as usual, with an 8 a.m. bike ride on May 13 with Mayor Tom Barrett as he pedals downhill to city hall from N. 51st. and W. Washington Boulevard. Once the day’s work is done, the party begins at 5 p.m. at the Mayor’s Design Award Winning Stone Creek Factory Cafe and Kitchen, 422 S. 5th St., where pizza from Transfer will be delivered by bicyclists from Flavor Cycle, and where clothing designs by Nicole LaBrie will be featured.

Vulture Space, the bicycle collective that has celebrated one year in the Plankinton Building, 651 N. Plankinton Ave., has also rented the Garden Gallery of the Milwaukee Public Museum, 800 W. Wells St. from 4:00 – 8:00 PM: on Thursday, May 16th, for its free-to-the-public Antique and Vintage Bicycle Show . The Wheelmen and South Shore Cyclery will display a rare collection of bicycles dating from the late 1800′s up to the balloon tire bikes of the 30′s through 60′s. Evan Pack of Vulture Space, says his idea with this and other programs is “to create excitement about bicycles, and to demonstrate the great interest in bicycles in Milwaukee.” At 6 p.m. that evening, I will give a talk about the history of bicycling in Milwaukee, with particular attention to the distance races and the bicycle clubs of the late 19th century. This is all new research, but I will augment my talk with some items from previous speeches, including “The Greatest Exhibition You Have Never Seen.”

I will also be giving my monthly talk, free to the public at 6 p.m. May 15th at Shakers, 422 S. 2nd St. on the topic of scoundrels and swindlers, both petty and large, private and public, during the course of our city’s sometimes spotty history. This is also new material.