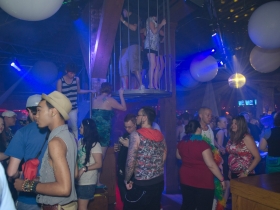 Opened in 1984 as La Cage Aux Folles, the place now known as La Cage, at 801 S. 2nd. St., is one of the city’s oldest gay bars and dance clubs. With the advent of MTV, it was originally a video bar, offering video-themed event nights every night of the week. Known as the bar “where you can always be what you are,” La Cage offered free drinks to anyone who came in on Friday and Saturday nights dressed in drag.

Its original owner, George Prentice, he knew he was taking a big risk. Today, this stretch of 2nd St. in Walker’s Point houses multiple gay bars, but it wasn’t until La Cage paved the way that the other bars started coming in. “The word on the street was that I was nuts,” explained Prentice in an interview with Q-Life News. “We hung a sign and put our name right out there on the front of the building. That was huge! At the time, either you knew where the gay bars were, or you weren’t going to find them, because they didn’t want straight people coming. There wasn’t the intermingling you see today – it was too risky for so many reasons.”

La Cage also made headlines by becoming the first gay bar to uncover all its windows. To 32-year-old bartender Adam Clasen, the old closeted style seems antiquated. “I came out in 1999,” he says. “Now that I’ve been out, I can’t imagine living like that after I’ve been in a city where I can walk down the street holding my partner’s hand.”

Built in the late 1800’s, the building used by La Cage is on the National Historical Society’s landmark list and was home to a grocery/mercantile store and multiple bars before La Cage opened. Originally, La Cage took up only half of the building’s street level, but six months later Prentice and his partner Corey Grubb rented the whole building and one year later bought it. Since then, the building has seen countless renovations, with the location of dance floors, bars, walls, seating areas and restrooms continually moving. In 1998, the building’s façade was completely redone. The bricks – which had once been covered by metal – were cleaned, the trim was redone, windows were resized and installed and two new entrances were added. 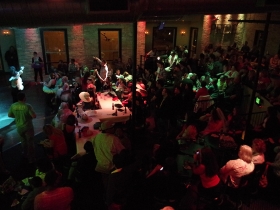 2004 saw even more changes, as three separate bars and dance areas were transformed into one dance floor. In July of that year, Prentice also went out on a limb by changing the name from La Cage to simply Cage because of the cage he put in the center of the dance floor. “Part of the reason for putting it there was to diversify and bring in more of the straight crowd,” explains Michael Jost, one of two partners who later bought the bar. “It didn’t really work. Now, ten years later, we could probably do it and get away with it, but it wasn’t so accepted then.”

In 2005, rumors began floating around that La Cage was for sale. “The first thing I thought was like, ‘Oh my God. He could sell it to anybody,’” recalls Kris Heindel. “We wanted to keep it in the community because it’s a landmark.” Heindel partnered with Jost to buy the bar. Jost had always dreamt of owning a bar, but he says that wasn’t the main factor: “I just couldn’t see it turning into condominiums or a Walgreens.” Or worse. “No offense,” interrupts Heindel, “but a straight bar.”

The new owners made a lot of behind-the-scenes infrastructure upgrades, updating things like the heating, cooling and sprinkler systems. One noticeable change, however, is the addition of the Montage Lounge on the building’s top floor. The space was originally four apartments and Prentice had torn them out in order to construct something, but none of his ideas ever came to fruition. “People were telling us what they wanted done with the space,” Jost says of Montage, which now hosts the shows that used to take place on the lower dance floor level. People wanted a separate space for the shows so that they could dance both before and after. “That’s what everyone wanted, so we delivered,” he says. La Cage now consists of three levels: the top floor Montage Lounge, the second floor La Cage dance club and the basement Etc. Lounge, which offers a quieter, more intimate setting.

This year (and pretty much every other year) onmilwaukee.com selected La Cage as Milwaukee’s best LGBT bar. WISN’s A-List named La Cage Milwaukee’s best dance club, something Heindel is proud of because it represents the bar’s diverse clientele. “It’s interesting to see the changes in the last 10 to 15 years of Milwaukee gay culture,” says Clasen. “This bar has gone from 100 percent gay to like 60-40 [gay to straight.]”

La Cage has become especially popular for bachelorette parties. With the onset of wedding season, Clasen says La Cage will entertain three to four groups of 30 and another group of 20 this Saturday night. That doesn’t even include the unannounced buses. Heindel says he’s seen an increase in the number of bachelorette parties over the last two to three years, but that doesn’t mean the club’s dynamics have changed much. “The ratio is the same it’s always been,” Heindel says. Since the community has grown more accepting of LGBT culture, he says it’s just more noticeable. “I think it’s great that they want to come to a gay bar,” he says, “but they’re not just coming because it’s a gay bar. They want to dance and watch the drag shows.”

Once a pioneer, La Cage is now a local institution. As Jost puts it, “when the average national life span of a night club is only a few years, for La Cage to still be here after 29 years really speaks volumes.” 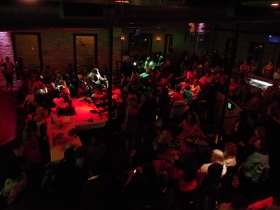 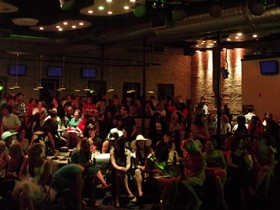 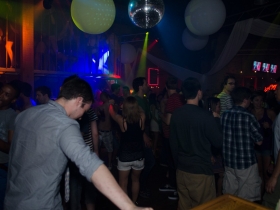 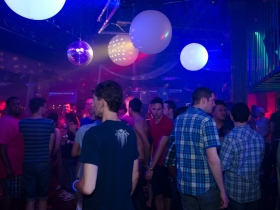