Windfall’s “A Little Night Music” a waltz to remember

Carol Zippel's cast finds a near-perfect harmony in, ironically, devoting as much time to its words as its notes.

A Little Night Music is a play I’ve found hard to describe. Delving into the complex relationships of its eight main characters always takes twice as long as I expect. Attempts to elaborate on its orchestral structuring and focus stretch for paragraphs. And, of course, explaining why I’ve such an affinity for Sondheim’s works in the first place tends to quickly become a run-on sentence.

Windfall Theatre had no such difficulty in performance. Not every note was exactly where it needed to be, but that can’t blemish this cast’s skillful, entertaining interpretation of the charming Sondheim musical in 3/4 time.

If that web seems complicated, it’s only the surface level, with each character in Hugh Wheeler’s book (itself inspired by Ingmar Bergman’s film Smiles of a Summer Night) possessing a nuanced relationship with all the others. Perhaps with that complexity in mind, director Carol Zippel and her cast focus in on the text of A Little Night Music over Sondheim’s intricate score, comprised largely of waltzes in 3/4 time or some other triple meter.

As Armfeldt grandmother and granddaughter, Michelle Waide and Alison Pogorelc have a strong rapport.

That seems okay. About half the musical’s songs are performed at least in part by the Quintet, a collection of five singers (Matt Wickey, Kristin Pagenkopf, Marcee Doherty-Elst, Isaac Brotzman and Heather Reynolds) who serve as a sort of vocal orchestra, chiming in at opportune moments with snippets of song that serve as counterpoints to the principals’ action and dialogue. And in the other half, Sondheim’s lyrics deserve as much attention, if not more, as his musical compositions. In the exceptions – the masterful trio of “Now,” “Later,” and “Soon” by Fredrik, Henrik and Anne; “Send in the Clowns,” the show’s most famous song; “Every Day a Little Death,” done especially poignantly by Monagle – Windfall’s cast rises to the occasion, guided by musical director Chris Wszalek.

What stands out more strongly is the sheer caliber of talent in this cast. Wheeler’s book is magnificently funny as-written, with Waide, Monagle and Clemons in particular getting show-stopping lines, and much of the physical comedy has been played up to complement that, with Elst leading the pack as a just-this-side-of-ridiculous stereotypically military man.

And in their interactions with each other, the cast offers enough chemistry to set off fireworks. Flores and Martinsek have the appropriate passion for their characters, especially during the aforementioned “Clowns,” but I was equally as impressed by the tenor of his rivalry with Elst and his flirtation with Charlotte. (Of course, more tenor would have been better elsewhere for Flores – his otherwise-marvelous baritone voice is about two notes south of the range needed for some of Fredrik’s solos.)

Even the youngest cast member, Alison Pogorelc, has a believable rapport with her grandmother and connects instantly with Clemons when the two share the stage. About the only relationship I didn’t quite buy was that between the elder Pogorelc and Clemons. For the bulk of the play, Pogorelc’s Anne walks about with a veneer of affectation that suits a young trophy wife brilliantly, but not letting that drop when she learns of Henrik’s feelings is a choice that didn’t ring true.

Luckily, little else joined it. Whether you’re in the mood for a little music in your night, or just a well-crafted, well-performed play, Windfall’s A Little Night Music is perfectly tuned. 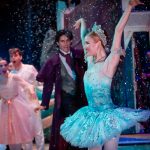