By Amalia Oulahan, Milwaukee Neighborhood News Service - May 1st, 2013 10:29 am
Get a daily rundown of the top stories on Urban Milwaukee 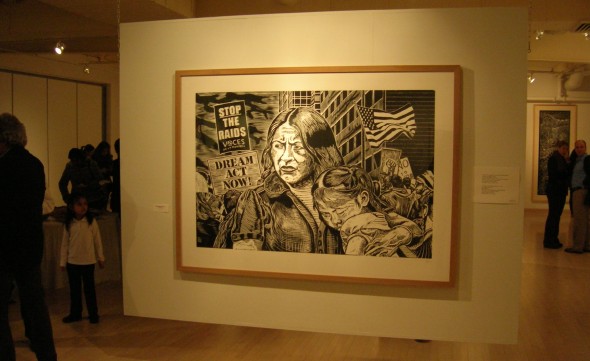 The exhibit features woodcut prints that the artist, who is a senior lecturer at UW-Milwaukee, based on interviews conducted with 10 families, focusing on their immigration experience.

Zulay Oszkay, artistic director at Latino Arts Inc., said this work fits well in the gallery because the families featured are from the neighboring community. “It hits close to home,” she said. “The faces are familiar; the people who are there, you can see them in the gallery.”

Oszkay also said Deal has a longstanding relationship with Latino Arts Inc. The gallery has exhibited his work in the past, and Deal’s wife, Dinorah Marquez, directs the Latino Arts Strings Program.

Deal came to Milwaukee 15 years ago, after living in Mexico with his wife and daughter, and worked in Milwaukee Public Schools as a substitute teacher. Because he is bilingual, he often worked in schools where students spoke Spanish, and said he observed the challenges many students faced including language barriers or coming from families with mixed immigration statuses. 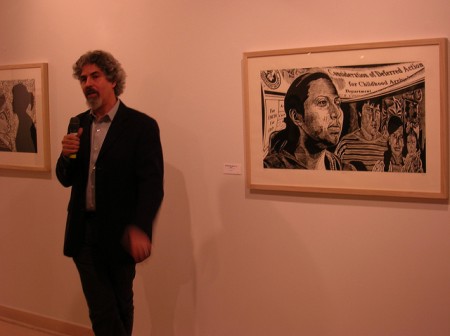 He said his own daughter, who is Mexican, faced similar challenges adjusting to life in Milwaukee. As a teacher, he said, he “felt like a link between the world kids had left behind, and one they were entering.”

For this project, Deal and his team of three undergraduate research assistants and three volunteers interviewed 10 families. Each interview was three hours at most, but provided a wealth of material. “At the end of the interviews, [the families] all said, ‘We just started, you have to come back,’” he said.

One piece of artwork displays a young citizen from a mixed-status family, with shadows representing his mother and sister who do not have legal immigration status. Another print shows a man surrounded by the lyrics of a song he wrote and another depicts a student who was working for immigration reform when the Deferred Action for Childhood Arrivals (DACA) memorandum passed.

Last year, when Deal delivered a lecture about the project, younger members of the families read their parents’ journey stories aloud. “The audience was parents,” said Deal. “This exhibit is exemplary in that. And in this exhibit, each piece has a story.”

According to Deal, one of the best ways to learn about issues related to immigration is by sharing stories. He said often people are not particularly sympathetic to the issues, because politicizing immigration, or any issue, also dehumanizes it.

“The most important thing is that the work is trying to serve as a vehicle for what people have to say,” said Deal.

The work is specific to Milwaukee, which Deal describes as a “microcosm,” but has larger implications. “This particular exhibit could have happened in any large city,” he said.

Oskay also emphasized the importance of Deal’s themes, presented as factual narratives. “Printmaking is one of the oldest art forms, often used for politics,” she said. “This exhibit is not a judgment call on a political movement; it’s presenting a process people go through.”

About a month after it opened, the Ni De Aqui Ni De Alla exhibit served as the backdrop for a presentation by members of Taller Yonke, a collective of Mexican border artists and lawyers from the Milwaukee law firm Straub Immigration who discussed the recently proposed immigration reform bill.

Milwaukee social worker Lilia Figueroa, who visited the exhibit to hear these presentations said, “[As a social worker,] we are starting to deal with more clients with mixed-status households. This makes things difficult with finding services for them.”

“A lot of families come out to bring awareness to the issues,” she said. “It’s moving to have it here in black and white; it speaks a lot more and brings out more emotions.”