Advocates says bill before Congress is historic but could still be improved. 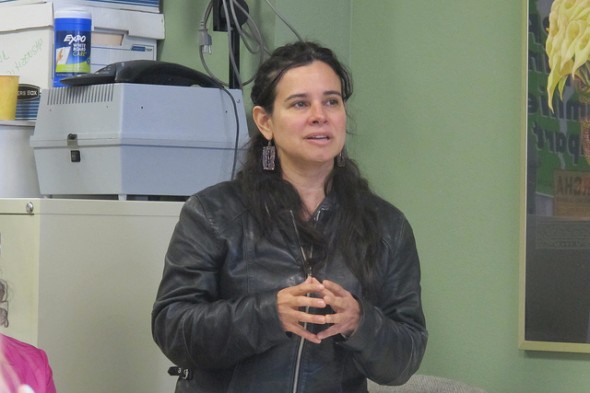 Milwaukee immigration reform advocates gathered at Voces De La Frontera to mark what they consider a historic step forward: a bi-partisan bill to revamp immigration laws has been introduced in Congress.

“We have a commitment to start unfolding the story around the immigration reform bill,” said Christine Neumann-Ortiz, executive director of Voces, to the overflow crowd of about 50 people huddled in the lobby at 1027 S. 5th St.

While the proposed reform creates a path to citizenship for more than 11 million immigrants, Ortiz said the bill arbitrarily left out 300,000 people who came to the country after Dec. 31, 2011, the cutoff date for citizenship.

She also said the path is too long, and Karla De Jesus, 17, agreed. De Jesus has been living in the United States since she was 5 years old and will attend college next year.

“As a dreamer (student) I will only have to wait five years to attain citizenship but my parents will have to wait 13,” said De Jesus, who stood in front of the 45-page legislation on the table.

She said her parents would be in their 50s by the time they’d be eligible to become citizens. 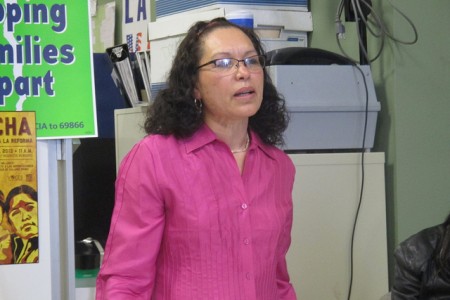 Sofia Anguiano, who came to the United States in the 80s and is now a citizen, has been waiting 16 years to bring her brother and sister here from Mexico. (Photo by Edgar Mendez)

Ortiz would like to see changes to the “overly cumbersome” process, including making it affordable for low-income families. In addition, she said the president should address the high rate of deportations. She pointed out that legalization of undocumented immigrants is taking shape while record numbers of immigrants — most of whom pose no criminal threat — are being deported.

“We need to keep families together,” said Ortiz.

Ortiz added that the legislation proposes background checks. There are waivers for some minor offenses, but serious criminal activity would exclude an individual from attaining citizenship. She said that the legislation is not clear on the issue and it needs to be examined further. Also unclear is the role of the long-used family waiver process in which naturalized citizens petition to bring other family members into the country legally.

Sofia Anguiano, who arrived in the United States from Guanajuato, Mexico in the 1980s and is now a citizen, began the petition process long ago and is still waiting.

Anguiano, who yearns to see her siblings, submitted paperwork for her brother and sister to come to the country legally 16 years ago. She said the new legislation could exclude family petitions, meaning she and her eight siblings would remain separated.

“It’s my dream to have one of them (siblings) by my side,” said Anguiano.

Ortiz said the bill places more importance on employment verification than on the family waiver as a determining factor for attaining legal residency status.

That also worries Omar Damien Ortega, who believes workers will continue to be abused. “There will be a continuation of exploitation of working people if you give employers too much power,” said Ortega. Employers would hold workers’ immigration status in their hand, he added.

Ortega said an employer recently fired him, using his status against him. He worries that the new legislation will make it easier for workers’ rights to be violated.

Ortiz also criticized that implementation of the legislation is tied to additional border security and a 90 percent apprehension rate of immigrants trying to cross the southern border illegally.

Despite the concerns, the meeting drew to a close with the crowd chanting “si se puede, si se puede,” meaning “yes we can.”