More than 100 advocates met with legislators and pushed for pro-bicycle policies. Will it have an impact?

By Dave Schlabowske, Bike Federation of Wisconsin - Apr 19th, 2013 10:00 am
Get a daily rundown of the top stories on Urban Milwaukee

Despite cold rain, over 100 people from more than 40 communities across Wisconsin came to the Bike Federation of Wisconsin’s Lobby Day in Madison on Tuesday April 9th. Armed with umbrellas, smiles, facts and personal stories, the army of advocates packed offices in our State Capitol to tell their elected representatives why bicycling is important where they live (and vote). This year the Bike Fed had two formal “Asks” for Lobby Day:

Among the advocates were several people who had personal tales of their spouses and friends who, despite riding their bicycles safely and legally, were killed in crashes in which the drivers were admittedly negligent, but got off with small fines and tickets for minor traffic violations. Laurie Landgraf  told the painful story of her well-known husband David Landgraf who was killed two years ago. Todd Jensen spoke for his wife, who survived the crash involving her and Jeff Littmann, because it was still too painful for her to speak about the death of her friend Jeff. James “Jimi” Sellers came to tell the story of his wife Nancy Sellers, who was killed by a drunk driver while out on an evening bike ride just two weeks after finishing Race Across America with Team Badger Bikers. 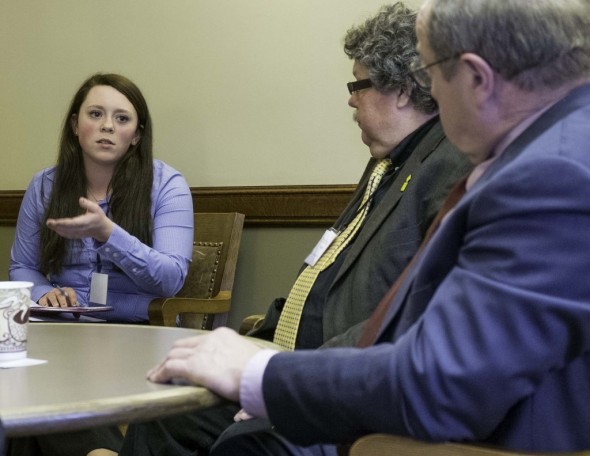 Sheboygan High School Junior, Maja Holcomb tells Chris Kegel (owner of Wheel & Sprocket Bike Stores, and Rep. Alvin Ott (R-Forest Junction) how Troy Tousey was killed despite the fact that he was riding single file, near the shoulder of the road on a group training ride with her.

While most of the elected officials seemed sympathetic to the stories of tragic deaths of innocent people that sparked our efforts to pass a Vulnerable User Law, at least one legislator asked why he should support increased penalties to protect people on bicycles when so many of them fail to obey the current laws. Our advocates in that meeting were quick to respond with facts to debunk the myth that people on bikes break the laws any more frequently than people in cars. They also made a strong case for how the VU Law would protect all vulnerable road users, including people walking, in horse drawn carriages, law enforcement officers, etc. By the end of the meeting the legislator apologized and said he would likely support the VU Bill if it makes it to a floor vote.

More frequently, legislators questioned our first ask to save funding for bicycle projects in the budget because they said people riding bicycles don’t pay for roads. Our advocates were armed with facts to counter this argument against funding bicycle projects, but I am less sure that we have been able to clear up this common misperception. It feels like we have made progress with the members of the legislature, but less confident we have proved the value of bicycling to our Wisconsin economy with the administration.

Looking back after a good night’s sleep and a day to reflect, Lobby Day was a big success, but it is clear that even after 25 years of advocating for bicycling in Wisconsin, we all have much more work to do. We still need to change the perception that people on bikes are scofflaws, and we need to convince our elected representatives that money spent on bicycling has a tremendous return on investment for the state. Over the next week or so, I plan on exploring how everyone who rides a bike in Wisconsin can help debunk these myths and improve the perception of bicycling. Stay tuned… 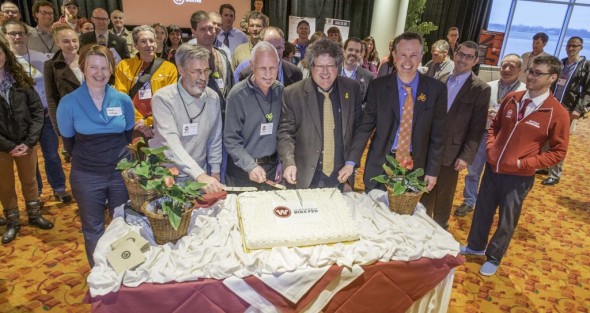 Some of our founding Bike Fed members joined current staff after Lobby Day to celebrate 25 years of advocating for bicycling in Wisconsin.