It’s local but international, and rated as one nation’s top bars to watch soccer. 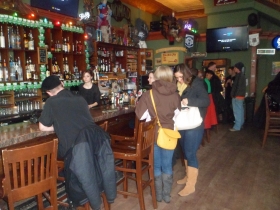 Inside the Nomad. Photo by Audrey Jean Posten.

The website of Nomad World Pub proclaims that customers can “travel the world without leaving your barstool.” A world map covering an entire wall to the left of the door. Aged oriental statues and musical instruments sit behind the bar. Carved masks hang above the ledge that spans the interior’s perimeter. Some of the masks are wooden, with large, expressive mouths. Others are painted in tribal designs with hues of purple, green, red and yellow. One even looks like a bird. Even the classic old drop ceiling, original to the building, bespeaks a different time and place.

Built in 1890, the building that now houses the Nomad at 1401 E. Brady St. was originally a Schlitz tavern and has been a bar ever since. In 1995, Mike Eitel took over, naming the tavern after his love for world travel, which has yielded much of the pub’s international décor. The Nomad celebrated its 18th anniversary on March 14, complete with African dancers and fire freaks, who perform with flaming sticks.

Back in 1995, Milwaukee was a different world for soccer fans. Watching a game or favorite team meant paying extra for a special soccer channel on your TV. Even though soccer is the world’s most popular sport, watching at a local tavern was out of the question if it had to compete with American football, baseball and basketball. Noticing there wasn’t really a venue in the city catering to its fans, Eitel decided to show soccer on TV and incorporate the sport into Nomad’s global flavor. Part of that mystique includes the pub’s soccer ball planters. They sit outside during the summer, but rest on the ledge below the masks during the winter, waiting, like Milwaukeeans, for warmer weather.

“We were the first place to focus on soccer,” says Nomad general manager Josh Malone. “Other places followed. Now it’s so big that other places open because of it.” Nomad has been recognized not only locally, but nationally, for its soccer atmosphere. Esquire Magazine picked the Nomad as one of Wisconsin’s best bars. Before the 2012 Euro soccer tournament, Bleacher Report listed the pub as one of the 25 best places in the country to take in a game.

If there is a game being broadcast somewhere in the world, odds are it’s on at Nomad. Soccer enthusiasts can keep track of upcoming televised matches with the help of a board on Nomad’s wall or by visiting the pub’s website. Some days, Nomad even opens a few hours early in order to show early games. While these everyday games are a big draw for the Milwaukee soccer community, the World Cup creates an even crazier atmosphere. For the 2010 World Cup, Nomad hosted a block party that heard fans reach 119 decibels while singing “Ole, Ole, Ole” after a U.S. victory. The building’s upstairs was even renovated from an apartment to an additional bar and seating in order to accommodate the large crowd. Malone says the Nomad team began planning for the 2014 World Cup just as soon as the 2010 tournament finished, but would not give away any details, saying soccer enthusiasts will simply have to wait for the event. 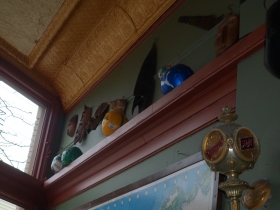 Soccer fever at the Nomad has even spread to non-fans. Malone has been Nomad’s general manager for six years and says he had little interest in soccer prior to working there. “Now it’s kind of grown on me,” he says. Regulars Doug Armstrong and Joe Smith agree. “I got interested in soccer after coming here,” Armstrong says. “It’s not necessarily my favorite sport, and the crowds become a bit much sometimes, but it’s still a lot of fun. It’s refreshing from American sports.” Smith says he’s not a big fan either, but the Nomad atmosphere makes it more enjoyable. “Soccer fans are a lot like Packer fans,” he says. “They are just as passionate and into the game.” Plus, he remarks, “A 2-1 match can be goddamn fun to watch!”

While 2010 featured the upstairs expansion and a new, smoke-free atmosphere prior to the smoking ban, it also marked the advent of  “The World’s Shortest Happy Hour.” The Nomad’s happy hour is only 15 minutes, from 4:00 p.m. until 4:15 p.m. During that time, most drinks are only $1. Malone says this began as more of a joke. “We’re not a bar that does a lot of discounts,” Malone explains. “Everybody does happy hour, but we never really did.” During the 15 minutes, the bar’s crowd swells with people looking to take advantage of the deal. Two women are obviously disappointed when they wander in barely two minutes after the time is up. Armstrong, who’s lived on the east side for 10 years and frequents a number of bars on Brady St. and North Ave., says he did not know about the happy hour. “I virtually just stumbled upon it, like I think a lot of people do. Some people come in here not knowing what they’re getting into.” 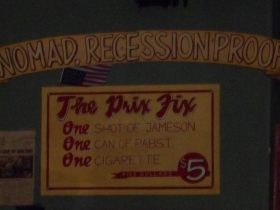 Others, however, know exactly what they are getting. And that is Nomad’s signature drink deal, the “Prix Fix,” which includes one shot of Jameson whiskey, one Pabst Blue Ribbon beer and one cigarette, all for $5. Like the 15 minute happy hour, it was also created as more of a joke. “It was meant to be a joke on a sign,” Malone explains, “but people started ordering it and it just stuck.”

Malone says Nomad is not really a younger bar, but caters more to a regular, older crowd. After working for nine years on Water St., he says the Brady St. atmosphere is “way better.” Smith agrees. “It’s just very laid back here,” he says. Gesturing to a woman who is showing off her baby to a couple at the bar, he says, “I mean, we’ve got a baby over here!” Or take Mark Hudak and Mary Murphy: the bar has a special place in their hearts. The two were married a year after the pub opened and the Nomad was one of their first stops as husband and wife. They were touched when the staff found out the two were newlyweds and promptly put up decorations for the occasion. The couple knows two other couples who met at Nomad and ended up getting married. Aside from the sentimental factor, they also like that it’s been a part of the community for so long. “It’s just an easy place to be,” Hudak says. “You can always sit in here and create a conversation.”

For Armstrong, a key attraction is the Nomad bartenders. They’re “always interesting,” he says. “When I came in here years ago there was an Australian barkeep. Also a barkeep that was a Londoner.” Plus, there’s the beer selection. Nomad has two dozen on tap, and dozens of other brands in cans or bottles. Smith’s favorite is Guinness. “I like to keep the lines as clean as possible by keeping them flushed,” he jokes. Gesturing toward the taps, he says, “You’ve got Amsterdam with Carlsburg and Dublin with Guinness. It’s like a world tour.” Just another way to travel the world without leaving your barstool. 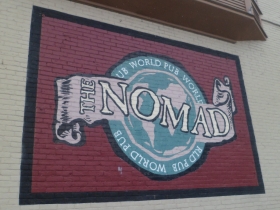 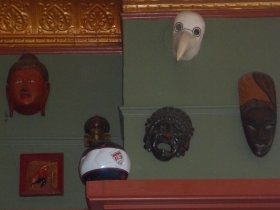 2 thoughts on “Taverns: The Global Style of Nomad World Pub”