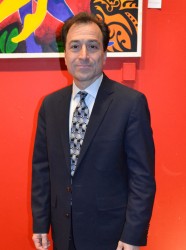 Roggensack might in some ways have been describing Ed Fallone, 48, whose forte is language. Fallone grew up in Olney, Md., a suburb of Washington, D.C. His mother was born in Mexico (he would be the first Latino justice in the Wisconsin Supreme Court’s history) and his father was Italian American, and a high school teacher.

“My father had this big study, floor-to-ceiling with books,” Fallone recalls, “and he was always pushing a book at me. I consumed every book I could, including some that were age inappropriate. In elementary school I tried to slog through Pilgrim’s Progress. I was sneaking James Bond books. I thought I was going to be a writer. Law was just a fallback plan.”

He won a full scholarship to a six-year program at Boston University that combined an undergrad degree with a law degree. “And when I started taking law classes I really fell in love with the law.”

After graduating in 1988, Fallone was hired to work at the D.C. office of a New York corporate law firm, Fried Frank Harris Shriver & Jacobson. There he represented companies including defense contractors in both civil and criminal cases, working under former Securities and Exchange Chairman Harvey Pitt.

In 1992, he joined the faculty of Marquette Law School. “I’d always had in the back of my mind that I wanted to teach.” Now tenured, he teaches courses in constitutional, corporate and criminal law. He has also practiced law part-time for Gonzales, Saggio & Harlan, the largest minority-owned law firm in the state, and has done pro bono work with several nonprofits serving Latinos, including two that provide legal assistance.

Fallone also writes a blog on legal issues that displays his skill with language. “Ed Fallone is very bright,” says Geske, a colleague of Fallone’s on the faculty of Marquette University Law School who says she is neutral in the race. As for Fallone’s lack of bench experience, Geske notes that Abrahamson – widely viewed as one of the smartest judges in the high court’s history – was also a professor before being appointed to the court. “Not everybody on the court has to be a judge,” Geske says.

Fallone’s favorite U.S. Supreme Court member is Oliver Wendell Holmes. Holmes fought in the Civil War, and from that bloody clash of ideas came to resist any big idea or “overarching” theory of law, Fallone says. “I’ve come to that point myself,” he adds. Otherwise, “the judge ends up trying to fit cases into that box.”

Because Roggensack is a key member of the high court’s conservative majority, many Republicans and groups like Wisconsin Manufacturers & Commerce are lining up to support her, while unions and Democrats tend to support Fallone. His views on most issues are largely unknown, but the usual right versus left dynamic has created one of the dominant themes for this race.