Nine-floor, four-star hotel will add drama and 158 rooms to Third Ward; hopes to open in 2015. 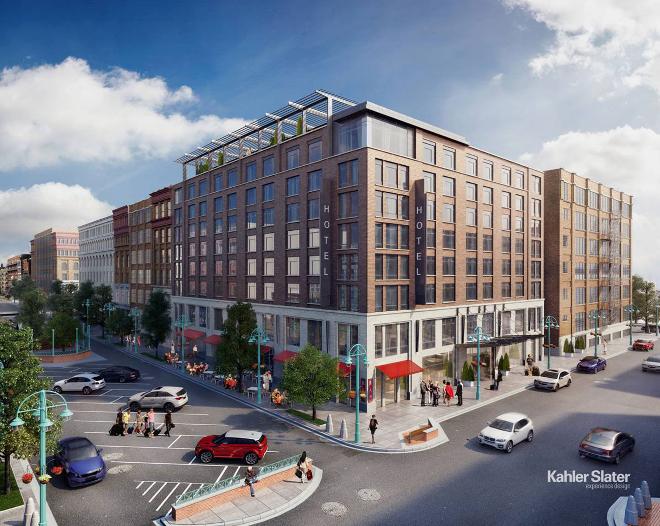 The proposed 158-room Kimpton Hotel in Milwaukee’s Historic Third Ward sailed through the neighborhood’s Architectural Review Board. Receiving unanimous approval, multiple commissioners remarked about how the planned building did a good job following the design guidelines for the neighborhood.

The development site, on the northeast corner of Broadway and Chicago St. is currently a surface parking lot.

Doug Nysse of Arrival Partners, the development advisor and planner for project developer HKS Holdings, presented the plans to the board. Kahler Slater is serving as the project’s architect. Nysse formerly worked for Kahler Slater as the leader of the firm’s Hospitality Team.  With Nysse, Kahler Slater handled the nearby Hilton Garden Inn Milwaukee Downtown and Milwaukee Marriott Downtown.

Project Details Discussed at the Meeting

Kimpton had previously attempted to enter the market through the Palomar Hotel development in the Park East; however, that deal fell apart as the recession dried up the real estate market in 2008.