The Alma Center teaches self-control to ex-cons and others with violent histories.

By Andrea Waxman, Milwaukee Neighborhood News Service - Feb 25th, 2013 09:59 am
Get a daily rundown of the top stories on Urban Milwaukee 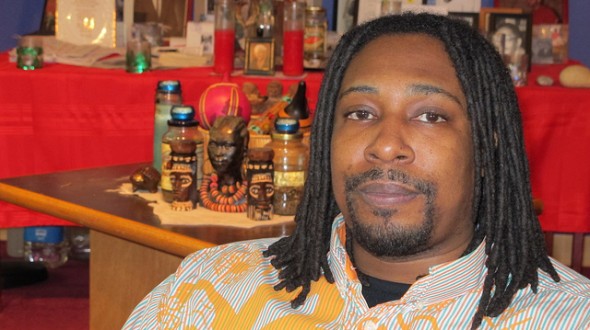 Two of the three men sitting around the table are still on parole. Charged with domestic violence, they are participants at different stages of the “Wisdom Walk to Self-Mastery. ” Today, after 19 weeks of rigorous self-examination, reflection and a great deal of learning, one of them, Willie Boyd, is “graduating.”

“I’ve come to accept the fact that I need to be forgiving no matter what the situation is. When I came here, I had a lot of retaliation thoughts … but throughout this course I’ve learned that there’s no point in that because all you can do is get yourself into deeper trouble,” Boyd said.

The Wisdom Walk is a program of Alma Center, a nonprofit that provides services to men charged with perpetrating violence or abuse toward their intimate partners. The program is rooted in the knowledge that many of the men who come to the center have extensive histories of exposure to violence and victimization in their own pasts and still suffer the effects of the resulting trauma.

Based on the belief that violent behavior is learned, not inherent, the program seeks to help men who behave violently unlearn lessons they learned as children, primarily from their parents or guardians.

“Trauma is a hurt, an injury, a pain to your soul that really does have to be healed [for you] to be functional,” said Terri Strodthoff, founder and executive director of The Alma Center Inc., 3628 W. Wright St.

The Wisdom Walk is “a healing circle,” said Jojopah Maria Nsoroma, Wisdom Walk creator and facilitator. The men learn specific tools for self-control, such as meditation, and study “a collection of wisdom, philosophy and teachings to help them become conscious of their pain and to learn how to transform it,” she added.

Nsoroma noted that the Wisdom Walk’s motto is “Any pain that is not transformed will be transferred.”

Nsoroma, a self-described “wisdom keeper,” studied the ancient wisdom and practices of the West African Dagara tribe under the elder, Malidoma Somé. In addition to relying on proven group therapy strategies and scientific discoveries from quantum and theoretical physics and neuroscience, she incorporates cultural anthropology and ancient spiritual teachings from the indigenous cultures of China, West Africa and Native America. Though she says she is not connected to any organized religion, symbols, ritual and ancient practices bring strong spiritual and cultural components to the program. 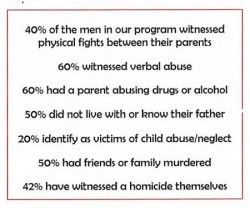 Nsoroma guides the men through a five-step process designed to help them uncover their pain, feel their pain, express their desire for change, open themselves to awareness of what will help them change, and finally, achieve the change they seek.

The insights, self-control strategies, emotional unburdening, and forays into feelings of love and trust all help the group members learn to overcome negative thinking and behavior that are rooted in pain. Ritual is important, Nsoroma explained, because it offers an “opportunity to connect with the part of ourselves [our emotional, right-brain side] that knows the truth, that has the answer to solve our problems and our conflicts.”

Most of the Wisdom Walk participants are referred to the Alma Center as a condition of parole. According to Willie Boyd and the other two participants attending his graduation meeting, none of them knew what to expect or felt much optimism about the program. Group members Boyd and Rodney Collins teased Donald Triggs, the newest and youngest among them, who they said fell asleep at most of his first meetings.

But Nsoroma is herself intriguing, according to Wisdom Walk graduate and co-facilitator Floyd Rowell II. “You can just see the aura around her.”

She quickly inspires group members to see the power of the 18 two-hour, twice-weekly sessions. Participants take one week off toward the end to try out life without the support of the program. 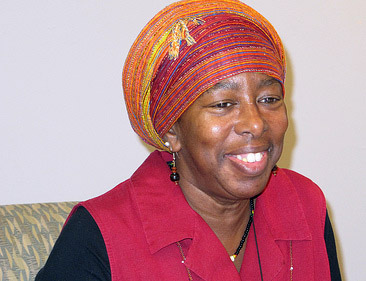 “The men get interested in these teachings because what I’m doing is unheard of. I start off with the [Dagara] medicine wheel and right away they are being comforted and validated. The medicine wheel tells you that you carry something within you that your community needs, so you are not disposable. It’s hard for them to hear at first but at the same time they long to hear it,” she said.

Nsoroma noted that most of the men are African American and that trauma resolution for them is not just about individuals, but also about what happened to their community and their people.

“If I only used the teachings of the Western culture … there would be something missing. At first, we thought [healing people] was only about food, shelter, clothing and jobs. But we learned that a person can have all those things but if they still believe they are disposal beings, the trauma isn’t healed. The Wisdom Walk gives them a way to know themselves.”

After almost five months of intensive work with Nsoroma and the group, the middle-aged Boyd says the Wisdom Walk has unquestionably changed his life for the better. “Now, I think about not retaliating and I try to focus on love rather than hate,” he said.

As for Triggs, thanks to Nsoroma and the men in his group, he’s all in now. “[The Wisdom Walk] is one of the best things that happened to me,” he said at Boyd’s last meeting. “Willie’s patience with me made it easier to come to class.” Turning to Boyd, he added, “I’m going to miss you, man.”