The co-owner of Centro Cafe is helping lead a Riverwest renaissance. 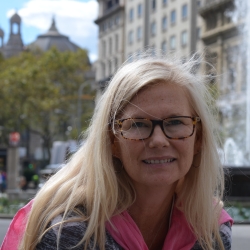 The opening of Riverwest’s Centro Cafe, on June 18, 2009, could hardly have been more dramatic. As the last patrons exited, the skies were ablaze with lightning, as thunder rolled and rain poured. The lightning hit the bell tower of St. Casimir’s and the bell rang for a full two hours.

“When I was growing up,” Centro’s co-owner Peggy Karpfinger recalls, “we were told how our dad had been born in a thunder storm. I was with my dad Barney when he died during a 2006 thunder storm, so I guess he was with us somehow the night we opened.”

We’re sitting in the cafe, at 808 N. Center Street. Co-owned by Margaret Mary (though everyone calls her Peggy or Peg) Karpfinger and her husband Patrick Moore. Their restaurant’s target-like logo suggests, it’s become the center of this neighborhood, which it has, a lovely place to head when you’re seeking Italian food served in simple white bowls.

So tightly intertwined are Peggy and Patrick’s lives, it’s impossible to profile one without including the other. They live in a duplex on Auer Avenue east of Humboldt Blvd., purchased and re-habbed in 2001, two years prior to their marriage at Lake Park.

We ordered gnudi, and keeping it in the family, it was prepped by Peggy’s nephew, Kory Karpfinger, a feast brought to perfection by Chef Josh, who knows his homemade ricotta dumplings smothered in pancetta, wild and domesticated mushrooms, spinach and truffle oil. 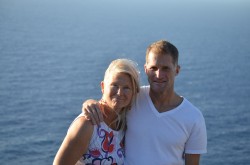 Then we sat back to enjoy the 1,000 square-foot space and a Kinnickinnic Whiskey, made in Walker’s Point by Great Lakes Distillery. Centro’s main dining area, where we sit, was added to extend the space of a former Schlitz tavern, where blue collars once wet their whistles. The original storefront was built in 1925 and it’s been home to a number of bars or restaurants over the decades: Curt & Jean’s French Quarter, East End Pub, Finale, Buzdom’s on Center and T.R.A.M.P.S. In 1986, there was a fire there, and the couple found charred joists when they began rehabbing the boarded-up ruin after purchasing it in 2003.

The newlyweds labored side by side. Patrick managed, maintained and rehabbed their other properties, including the first building to the west which currently houses People’s Books. Peggy ran her landscape business from that property while making plans for the restaurant. 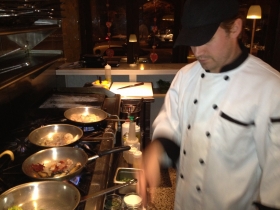 Cooking up something great at Centro Cafe. Photo by Emily Litjens.

Only the terrazzo floor and brick chimney remain from the old Schlitz tavern. But many elements were repurposed: old doors became bases for a marble countertop, glass tiles were cut from old windows, a banquette was made from old church pews, and the waitress station was purchased from Craig’s List for $200, delivered. While her spouse and a carpenter friend hammered and updated, Peggy worked on securing permits, plumbing and electrical bids, and hiring employees. She set up the kitchen, lined up vendors, and worked on the menu. Her husband always says, “without Peggy, it would just be a nice room.”

Karpfinger’s paternal grandparents immigrated to Milwaukee from Austria where they met while hiking the Alps. Her parents built Edgerton Contractors, Inc., into one of the region’s leading excavating and grading businesses. “They worked on all the major buildings in downtown Milwaukee,” she says, “including the stadium, convention center, and the Marquette Interchange.” Her dad was the wrestling coach at Marquette University for over 30 years, and her mom (100 percent Irish) was a Communications instructor at MATC. 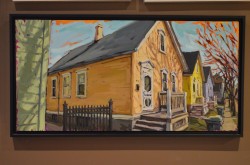 “My parents taught us so much about how to be good people and care for those around us,” Peggy says. Of the 18 Centro employees, 10 live in Riverwest. The restaurant has also created some spillover business for others: On nights when the wait for tables is so long, customers decamp to nearby bars and wait to get called on their cell phone when a table is ready.

Even with all of her rehab experience, the six years spent shaping Centro was a leap of faith, but it was aided by advice from Peggy’s realtor brother, Chuck Karpfinger, who saw possibilities for a more vibrant business atmosphere on Center Street.

“One of my brothers, Joe, is a former banker,” she says. “He thought we were crazy because there are so many horror stories from failed restaurants. We pinch ourselves when we see how we beat the odds.”

And the future? Peggy and Pat have purchased the building on the corner of Fratney and Center, and are rehabbing it into a restaurant with landscaped space for exterior seating. The building has flat roofs, perfect for growing microgreens and herbs for Centro.

If you can believe it, by the end of 2013 she has plans to move into yet another rehabbed home, this time with geothermal heating and cooling, and solar for heating water. It’s located just a few blocks from Centro Café, with a backyard adjoining the woods that runs straight down to the Milwaukee River.