How a globe trotter and former architect settled down to become a Milwaukee deejay. 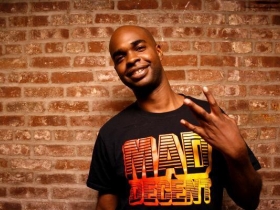 Tarik Moody is one of Milwaukee’s most distinctive on-air personalities, the evening music host and digital manager for 88Nine RadioMilwaukee, where he also produces and hosts his weekly show, the Rhythm Lab.

Now 39, his life has taken in a large swath of America.  Born in July 1973 in Louisville, Kentucky, Moody has lived all over the southeast, including Houston, Charleston, and Birmingham, but spent most of his early life in Atlanta where he attended high school before heading to Howard University in Washington, D.C., followed by a couple years in Detroit and seven in Minneapolis.

His degree from Howard was in architecture. So what’s a guy with a degree in architecture doing working as a deejay? For starters, he recalls his architecture history professor at Howard calling architecture, “Frozen Music.” The professor likened the architectural process to how you build a structure in creating music. Meanwhile Moody worked as an intern for a cable access music video show, giving him the opportunity to meet and talk with artists, and igniting his interest in the music industry.

Still, Moody didn’t ditch architecture (he says he loved it), and worked first as an intern for the National Institute of Health in Bethesda, MD, then as a Design Manager for Northwest Airlines where he worked on various projects including the Detroit Terminal. He liked Detroit (but doesn’t play tunes by devoted Detroiter, Kid Rock) and he saw the indie documentary, “Detropia,” when it was here as part of the Milwaukee Film Festival.  “Even though it highlighted the urban decay, it showed hope for the future,” he says, and predicts that in two decades, Detroit will be a popular city to live in, because artists are beginning to make it their home.

He loves Motor Town’s music history, including its R&B and Hip Hop, but cautions that not only Motown came from there, but also electronic music in the form of Detroit Techno. One of his favorite producers is the late J. Dilla, from Detroit.

In 1998, his architecture career took him to Minneapolis where he worked for RSP Architects. A year later, he began to volunteer at KFAI-FM, a local, non-commercial station, similar (he says) to WMSE. He co-hosted Groove Garden, prior to going to work for Minnesota Public Radio. Asked to apply for his own show, in 2005 he conjured Rhythm Lab Radio, a fusion he created to more clearly define an “urban sound,” that goes beyond hip hop & R&B to include jazz, electronic, world, and even indie rock. It’s a global sound and he’s immersed in it, with a deejay style that’s easy-going and “free-form,” as he puts it.

His reputation spread and RadioMilwaukee eventually called him to discuss his ideas and thoughts about radio, music, and, of course, the concepts behind RadioMilwaukee, then a new player in this city. One thing led to another and Moody was offered a job at 88.9 where he continues to produce and host Rhythm Lab Radio (with Minnesota Public Radio), broadcasting every Friday night. But his main job here is serving as deejay week nights from 8pm-12am, and Sundays from 3pm-8pm for RadioMilwaukee. He also deejays monthly, (Rhythm Lab Live), at Hi Hat Lounge on Brady, every lst and 3rd Thursday.

He moved to Milwaukee in 2007 and currently lives in diversified Riverwest, which he loves; it reminds him of places he lived in DC, before DC got really popular, Moody adds. A single guy, he’s both geek and nerd and a devoted multi-tasker.

“Pairing” is a buzzword these days, and it can refer to canines paired with wine (on various Thursdays at Portrait Society Gallery in the Third Ward) or wine or even caffeine paired with particular foods. We asked Moody to illustrate a few architecture/music pairings, and he gave us Frank Lloyd Wright’s “Falling Water,” with Bon Iver’s “Towers”or “Holocene,”….mainly because of the music’s simplicity, but he cautioned that there are underlying complexities you have to look and listen closely to see/hear. He adds that he’d pair Morphosis’41 Cooper Square in New York with a tune with ample amounts of soul, like Lapalux’s “Forgetting and Learning Again.” Catch this on youtube. As for a Milwaukee building, he’d pair the Allen Bradley (now Rockwell) Clock Tower with Milwaukee-based electronic producer Lorn’s “Cherry Moon,” from the album Nothing Else. “That song has some heavy tones which present the idea of a factory,” he says, “and the light sounds and textures remind me of the internal workings of a clock.” We asked him to pair Aaron Rodgers with a tune, but he blocked that question by saying he’s — horrors —  a Falcons fan.

In a lively March 27, 2912 interview by Amerikas Addiction, Moody praises social media and its effect on the music industry, and claims that an artist like Odd Future would never be where they are without social media. He believes the 18-21-year-olds really help a local music scene grow, and he’s like to see more venues targeted to that demographic.

In his spare time (that’s hard to imagine), Moody hangs at the Foundation Bar in Riverwest, a Tiki bar that reminds him of sunny days at the beach, and more specifically, “Can’t Do No Better Than That,” a track from the Milwaukee band, Surgeons In Heat.

“Milwaukee doesn’t have a particular sound, but it has a vibe, let’s just say it’s rich and diverse,” Moody says. A huge foodie who likes to cook, Moody hangs in his neighborhood, and when at home, listens to tracks via his computer that has a very nice pair of headphones, albeit ones which cause his ears to sweat after an extended period of listening. But it’s worth it because they offer more of the music’s details, he says.

Moody has spent considerable time building his vision of what music can be. He’d be pleased if Rhythm Lab Radio was syndicated across America, and would love to see, “Unlooped,” an event series he created in 2010 to promote electronic music, flourish and perhaps attract a record label. The music he chooses is anything but frozen, but he still nods to his old profession with his on-air handle “The architect.”