Marquette University’s huge archive of Tolkien manuscripts has made it a treasure trove for fans of “The Hobbit.” 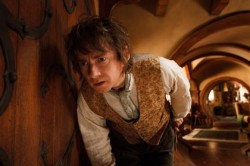 MARTIN FREEMAN as the Hobbit Bilbo Baggins in the fantasy adventure “THE HOBBIT: AN UNEXPECTED JOURNEY,” a production of New Line Cinema and Metro-Goldwyn-Mayer Pictures (MGM), released by Warner Bros. Pictures and MGM.
Photo by Mark Pokorny

Someone falls down a hole; the adventure begins. Consider Lewis Carroll’s “Alice in Wonderland,” born out of Alice’s boredom. The tale begins like this: “Alice was beginning to get very tired of sitting by her sister on the bank, and having nothing to do.”

Other times it begins when one enters the dark forest (The Brothers Grimm loved forests!), or is sucked into the vortex hole of a Kansas tornado and deposited for an L. Frank Baum “The Wonderful Wizard of Oz” journey on a yellow brick road. Then there’s the black hole introducing Genesis (1:1) in the Old Testament: in the beginning, God created the heavens and the earth.

And a great adventure.

Perhaps Stephen Hawking, the ultimate adventurer, said it best in his “A Brief History of Time:” “We go about our daily lives understanding almost nothing about the world.”

J.R.R. Tolkien (1892-1973) was a verbal wizard who stood on the backs of centuries of skillful tellers-of-tales, and from his vantage point as a venerable professor of Old and Middle English language and literature at Oxford University, he adventured into the world of fantasy to teach readers (and perhaps himself) about the ways of the world.  One of his finest works “The Hobbit” (1937), is celebrating 75 years of what can happen when you dwell in a hole: Here’s the opening sentence:

“In a hole in the ground there lived a hobbit.”

Bilbo Baggins was his name. His feet had leathery soles and a covering of brown hair. Until Gandalf (the ultimate magician, a necessary ingredient in fantasy tales), came knocking, Baggins was content to do little but eat seed cakes and chat a while.

The rest is literary history and it’s all archived under mountains of the author’s manuscripts in the serenely civilized Raynor Memorial Library at Marquette University.  That decades-old archive has gotten far more attention ever since the hugely popular Lord of the Rings trilogy of movies was released. How in the world did Milwaukee become the place to find all things Tolkien?

Back in 1956, the library had hired William Ready to build its collection. And Ready, who became intrigued by Tolkien after reading “The Hobbit,” hired Bertram Rota, a London rare book dealer, to serve as an agent for Marquette. Rota wrote Tolkien and asked to buy his original manuscripts. At the time, it seems, Tolkien happened to be worried about his retirement finances and he agreed to the sale for the less-than-princely sum of $5,000.

“And in 1957 and 1958 the boxes from Oxford arrived: “The Lord of the Rings” and “The Hobbit,” in longhand drafts, typewritten manuscripts and page proofs… along with minor and then-unpublished texts and other papers,” a New York Time story recently recounted. “After the professor died in 1973, his son Christopher sent more papers still… Not since Bilbo found an Elvish knife in a troll hoard, or Frodo inherited a certain ring, has such a treasure been acquired by so unexpected and responsible a guardian.”

Tolkien lives on behind the locked glass cases on the north wall of Room R360C, on floor two, tended with care (no photographs please) by Amy Cooper Cary, Head of Special Collections and University Archives, and Archivist Bill Fliss. If you are a Tolkien fan, it’s hard not to be moved in the presence of his handwritten manuscripts (three years for The Hobbit) replete with numerous notes and revisions, detailed calendars, maps and watercolors. In an adjacent room is a portrait of J.R.R. himself, alongside a misty majestic watercolor of trolls and Gollum by German artist, Horus Engels.

This fall, Marquette University enlivened the adventure, offering, for the first time, a course in Tolkien. The “students signed up in droves,” as a December story in the New York Daily News recounted. They were wrapping up the class right about the time that Hollywood released “The Hobbit,” to be followed by “The Hobbit: There and Back Again,” in December 2013, with a third film set for 2014.

Yet, it’s hard to imagine any flick, no matter how tricked-out, could beat the Baggins’ saga in all its literate splendor, and held in hand, like my  borrowed 1968 Third Printing of “The Hobbit (or There and Back Again) by the Houghton Mifflin Company. Bound in “misty-mountain” green, with illustrations by J.R.R. (John Ronald Reuel) Tolkien it ends on page 317 with these words by the ever-wise Gandalf:

“You are a very fine person, Mr. Baggins, and I am very fond of you; but you are only quite a little fellow in a wide world after all!”