How Do I Protect Myself?

The UMOS Latina Resource Center helps protect and assist abused women who may fear for their lives. 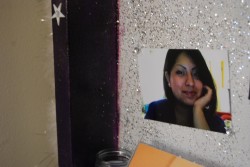 A picture of Dayana from the altar used in Milwaukee’s Brides Walk and Dia de los Muertos. Photo by James Gutierrez.

Dayana Garcia, her little sister, Brenda, and their cousin, Claudia, used to sneak up the back staircase of their parents’ home barefoot, making sure not to wake up any adults.

“We would go dancing, stay out past (curfew) and have to sneak back in,” Brenda Garcia says with a smile. “Those stairs were so loud we would hold our high-heels trying not to laugh.”

Dayana, 24, who loved to dance, was brutally killed, allegedly by her estranged husband, on Jan. 3, 2012 in her backyard. Almost one year later, Jose Luis Discua-Bados remains at-large while Dayana’s family is still desperately searching for justice and healing.

In 2011, 40 people lost their lives from domestic violence in Wisconsin – the lowest total in six years (2006), according to the Wisconsin Coalition Against Domestic Violence. Yet there have been a number of high-profile deaths this year in Milwaukee. For women on Milwaukee’s South Side, UMOS’s Latina Resource Center stands ready to serve any woman experiencing domestic abuse. The center reached out to the family of Dayana Garcia within a week of the tragedy.

Pilar Hernandez, Garcia’s grandmother, witnessed the horrifying murder from the downstairs flat;  she watched as Discua-Bados, an illegal Honduran immigrant, struck Garcia with a two-by-four and then stabbed her repeatedly. “(Pilar) felt so guilty that she couldn’t do more,” Brenda says. “She couldn’t even go to the funeral and had to ask my brother to tell Dayana that she was sorry.”

Brenda recalls how she and her sister spent the early morning of Christmas day – just a week before the attack – at the district 12 Police Station begging for protection. 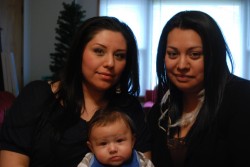 From left to right: Claudia Rosete, her son Daymion, and Brenda Garcia. Photo by James Gutierrez.

“While we were at the station, he was stalking her house,” Brenda says. “They said we could call ICE (U.S. Immigration and Customs Enforcement) or go get a restraining order downtown. They told us they couldn’t do anything for us that night.” Dayana’s cousin Claudia Rosete, 27, tells how Dayana loved spending Christmas with family and her newborn son, always full of laugher and joy.

“After she got married and had Omar, that light of hers went dim and more dim,” Claudia says. “She always wanted a family for her son and for herself and that’s what she was fighting for.”

Mariana Rodriguez, Program Manager at the Latina Resource Center, says the organization’s services continue to expand as people in the community utilize the center’s wide range of services. Last year there was an 80 percent increase for services offered while the center helped 1,800 adults and children.

It was fear that drove Dayana and her sister Brenda to spend the earliest hour of Christmas day at district 12 and that fear can be paralyzing. The center works hard to combat fear with education and new skills.

“We’ve had cases where sisters come in and say ‘my sisters in an abusive relationship,’” Rodriguez says, “but, we can’t force anyone to seek help.”

Rodriguez says giving family members or friends the information on domestic violence and alerting them to services such as the Latina Resource Center can make a big difference.

The center says women may delay taking action because they fear for their safety from the abuser, they worry about how to support themselves or are concerned about the custody of their child. “It’s not about helping a client or victim understand they’re a victim because they know, they know,” Rodriguez says with authority. “What they struggle with is, ‘how do I protect myself? How do I protect my children?’”

All of the programs offered (approximately 10 total) are free of charge. The center operates on a strict and ethical framework where the confidentiality of its clients is the number one priority.

The center is a branch of the much larger UMOS – United Migrant Opportunity Services – that operates in many states nationally. The center’s programs range from those handling sexual assault, domestic violence, children’s group for those who have been sexually assaulted and abused, a survivors group and other services aimed at the unique challenges of the Hispanic population in Milwaukee.

Statistics from the WCADV’s 2011 Homicide Summary show that a woman is six times more likely to be killed after ending/leaving an abusive relationship, and if the abuser has made homicidal threats that risk increases up to 15 times.

Brenda and Claudia are doing all that they can to prevent this from happening to another sister, cousin or woman in Milwaukee. “The reason why I’m going out in public and agreeing to these interviews is because I hope that Dayana’s story can prevent this from happening to someone else,” Brenda says. “I obviously want justice for my sister, but if her story can save someone’s life, that’d be great.”

Twelfth District Supervisor, Peggy Romo West contacted the family once she heard of Dayana’s story. She has worked closely with Brenda and Claudia since their first meeting on Romo West’s front lawn where her and her daughters were building an altar to honor the memory of Dayana. Since that meeting the women have combined their efforts to participate in Milwaukee’s Bride Walk Against Domestic Violence and the near South Side’s Dia de los Muertos Parade.

On Jan. 5, one year and two days after Dayana lost her life, Brenda, Claudia and Peggy are organizing a day of action for Dayana. As many as 60 volunteers are planning on driving around the Midwest – everywhere from Illinois to Northern Wisconsin – passing out WANTED posters and media packets. There is also a ‘Justice for Dayana’ Facebook page as well as multiple fundraisers planned for the coming months. 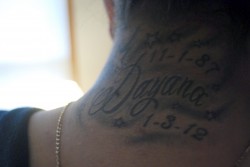 Brenda Garcia’s first tattoo in memory of her sister. Photo by James Gutierrez.

Brenda says that closure is something that seems impossible at the moment.

Brenda Garcia, and Claudia Rosete tell the story of their loved one, Dayana Garcia.