In the wake of the violent rampage by Radcliffe Haughton last weekend, some state legislators plan to reintroduce a bill that would force domestic abusers, who are already required by state law to surrender any weapons, to prove they’ve complied with the law. Haughton was under a four-year restraining order for domestic abuse.

But such a law wouldn’t have helped in his case. Haughton may in fact have surrendered his weapon. But he just went out and bought another gun — not from a store, but from one of the many private gun sellers, who are completely unregulated.

The bipartisan coalition, Mayors Against Illegal Guns, recently announced that the gun used by Haughton “was bought from an unlicensed private seller advertising on Armslist.com – a popular firearms vendor New York City investigated in a sting operation less than one year ago.”

It’s shocking just how easy it is to buy the most destructive weapons in America, as an investigation for the Today show dramatized. “Hundreds of thousands of guns are for sale, on hundreds of websites,” the reported noted. “We responded and set up meetings at popular shopping malls. We bought everything from a police-grade pistol to a semiautomatic assault rifle” to “a 50-caliber weapon so powerful it could take down a helicopter.”

A study by New York City found that “62 percent of private gun sellers agreed to sell a firearm to a buyer who said he probably couldn’t pass a background check.”  The study found there is a “vast and largely unregulated market for firearms,” with online companies like GunBroker.com, the largest of its kind, which did $1 billion in sales in 2009.

National studies show that 40 percent of guns are purchased on the secondary market, from unregulated sellers, and 80 percent of criminals get their guns from someone besides a retail clerk, notes Jeri Bonavia, executive director of WAVE — the Wisconsin Anti-Violence Effort. She has asked kids who attend the Boys and Girls Club where the guns in the inner city come from, and they say from “the black van.” It’s a van selling guns, she says, that “drives around the neighborhood like an ice cream truck — but with none of the regulation required for an ice cream truck.”

A bill to regulate these sellers “is probably the single most important change we could make in Wisconsin,” Bonavia says. “This is so large a loophole you can hardly call it a loophole.”

WAVE has twice worked with Wisconsin legislators to pass a bill placing some restrictions on these sellers. These individuals, Bonavia notes, are prohibited from doing background checks. So the proposed law would require them to have a licensed gun dealer do the background check, in exchange for a transfer fee.

“It’s not like we need a new system,” she says. “It exists already. There are more licensed gun dealers in the state than there are grocery and convenience stores.” So it would be quite simple for the unlicensed gun seller to work through the licensed store.

One bill WAVE helped get introduced would have made it a felony for any private gun seller to sell a gun without doing this check; another made it a misdemeanor. Neither bill passed.

Bonavia says there are Republicans as well as Democrats who understand the need for the bill. “In private conversations with Republican legislators they agree with what we’re saying, but they won’t vote for it. They’re afraid they’ll get in trouble with their party.” 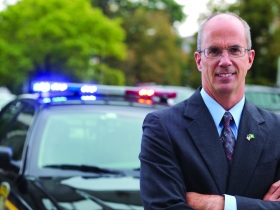 UW-Milwaukee Criminal Justice professor Steven Brandl offers a second approach that could help prevent murders by abusive spouses like Radcliffe Haughton. It’s a simple matter of getting law enforcement to enforce the current state law requiring anyone under a restraining order to surrender their guns.

To address that problem, he notes, the state Office of Justice Assistance assembled a working group to examine the issue, which resulted in a pilot program in four counties. In this program, sheriff’s departments followed up in every case where courts issued restraining orders on an individual charged with domestic abuse or child abuse, visiting the person’s home to make sure a weapon was surrendered. Brandl did a study of the program, which was released in March.

The program had results: in 15 percent of 212 cases of restraining orders, a firearm was surrendered; that’s 33 guns. And the costs were negligible. “It really didn’t take that much in resources,” says Brandl. It did add some time for the courts and sheriffs departments, he says, but it required no additional personnel.

Granted these were smaller counties. The two biggest were Outagamie (which includes Appleton) and Winnebago (Oshkosh). Milwaukee County would be a far bigger challenge. But the pilot program’s success offers a model well worth incorporating on a wider scale.

By contrast, bill now being proposed requiring individuals under restraining orders to prove they’ve surrendered their weapons would still require follow-up by law enforcement authorities. And the law already gives sheriffs the authority to do this. It only remains for counties to implement the current law, and follow the lead of that pilot program.

-There were some interesting comments in response to my column on the Journal Sentinel’s decision to end election endorsements. One issue raised is the endorsements in party primaries and smaller local elections, where voters often know very little about the issues; that could be a big loss.

-Meanwhile, Journal Sentinel editorial page editor David Haynes offers a thoughtful explanation of why the paper made this decision.

7 thoughts on “Murphy’s Law: How to Prevent Gun Rampages”