A proposal to lower cash fares for county buses could actually increase the cost for many riders.

The idea is to eliminate transfers, which the bus drivers’ union, Amalgamated Transit Union Local 998, has been pushing for a number of years. The problem is that thieves jump on the bus and steal a stack of transfers, which they then sell on the street. Drivers have at times gotten into scuffles over this.

And so a proposed amendment to the 2013 Milwaukee County Budget would eliminate paper transfers and lower the cash fare to ride Milwaukee County Transit System buses and paratransit services. But the proposal — sponsored by first-term Supervisors Jason Haas and David Bowen — would unfortunately create a paradoxical situation where lowering cash fares would actually increase costs for a number of riders. These changes would go into effect a year before a new farecard system is estimated to be deployed (which will very likely eliminate paper transfers). 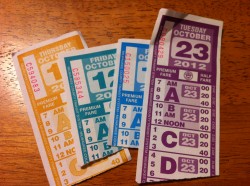 The current cash fare for MCTS is $2.25 for a regular rider. Riders have a number of avenues to reduce the fare, including a unlimited ride monthly pass ($64.00), unlimited ride weekly ride pass ($17.50), and a 10-pack of tickets ($17.50). Everyday riders are wise to purchase a monthly or weekly pass to get the lowest fare possible, and the proposed amendment would have zero effect on their cost to ride (MCTS’ annual report pegs them at 17% of riders).

The proposal would negatively impact those that take advantage of the 10-pack of tickets. Reducing the cash fare to $1.75 without a reduction in the 10-pack price immediately eliminates almost all of the value of the 10-pack. Doubling down on the negative impact is the elimination of the paper transfer, which would make any single trip involving more than one bus (currently at a total cost of $1.75 with a ticket plus paper transfer) more expensive.

The increased cost to riders who rely on transfers would supposedly be offset by the introduction of a $4 all-day, unlimited ride pass. Unfortunately, the day pass concept is rife with issues.

If Supervisors Haas and Bowen want to lower the price of riding the bus for the 42% of riders who pay cash, they would be wise to encourage them to purchase 10-packs of tickets in advance or consider simply lowering the cash fare (with no other actions). If they want to simply please the union a year before MCTS can create a new paperless farecard system, they should consider that eliminating the paper transfers a year early will have the unfortunate impact of raising fares on at least 27% of riders when they need to transfer.

The reality is that if one is paying $2.25 to ride the bus today, they’re doing it in the least efficient way possible. Riders should buy the ten pack in advance for $17.50 ($1.75 a ride). This proposal unnecessarily raises the price on riding the bus to riders who are currently taking advantage of reduced fares through advance purchases. Furthermore, I have concerns that that the 42% of riders paying cash today are not going to be able to take advantage of the day passes. If they are going to be able to take advantage of day passes, wouldn’t they be taking advantage of the cheaper advance fares today?

This budget amendment needs work, and should not be rushed through. The Finance, Personal, and Audit Committee wisely laid over the amendment yesterday, with numerous Supervisors raising questions about the proposal.

I greatly respect and am pleased by the Supervisors pushing for a reduction in bus fare that is estimated to increase system revenue (a resulting levy reduction of $100,000 is estimated). Additionally, I value the safety of our drivers, as a happy and welcoming driver leads to a much better riding experience. However, rushing this through at the expense of 1 in 4 riders while another solution is set to be deployed in a year is extremely shortsighted.

There are potential solutions to mitigate the negative impact to 27% of riders.

What do you think?