How an “expert” learned some lessons about black culture and good food. 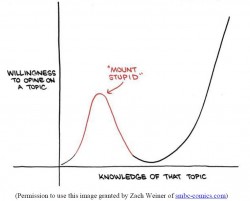 I’ve stood atop Mount Stupid many times, but my most profound encounter with it was about eight years ago. I was two years into my time at the helm of a new nonprofit organization, hell bent on improving fresh fruit and vegetable access and reducing obesity in Milwaukee’s north side neighborhoods – the kind of place that many from outside the community call a “food desert.”

I’d received a grant to run healthy cooking demonstrations at a food bank in my agency’s predominantly African American neighborhood. I was dicing some onions to prepare for the demonstration. It was springtime, and so the onions had been in storage for months and were especially concentrated and pungent that day. A woman who was standing in line to get her food basket took one look at my tear-streaked face and told me, “You’re doing it wrong.”

I handed her the knife and stepped back. She took a whole onion and deftly halved it lengthwise. Then she took the tough outer layer and peeled to back towards the root end, taking care not to tear it off.  “Use the skin as your handle,” she said, “so that you won’t cut yourself if your knife is dull, and you will use the whole onion, and since your hand is out of the way you can chop faster and you won’t cry so much.” The rest of the feedback from the food bank clients was positive but still disconcerting, ranging from “I would add more garlic” or “if you put in some other spices you would need less salt.”

The next morning an uncomfortable question started bouncing around in my head: “Just who is helping whom?” I began my descent down the other side of Mount Stupid. As someone who was trying to present himself as an authority on food deserts, it was an uncomfortable place to be. I realized that my solution was aimed at a stereotype and that my show-and-tell agenda had no space for a conversation.

And so I started talking to neighborhood residents and found a community that knows how to cook. It seems that people have forgotten that nearly all of the restaurant cooks in Milwaukee from the beginning of the 20th century until late ‘60s were African American. Then the Black Empowerment movement came along and the idea of cooking a wealthier person’s dinner suddenly became passé. Desegregation opened up educational opportunities and other professions for people to explore, and the face of the restaurant workforce changed to the predominantly Hispanic one that we see today.

Even now, forty years later, this historic link between early Milwaukee restaurants and the African American community has created the most food-opinionated culture that I’ve ever encountered. Being called a good cook is a point of pride. One time I asked a lady for a recipe and she gave it to me, begrudgingly and slowly, as if she was doling out hundred dollar bills. But when I made it at home it didn’t taste the same and I told her so the next time I saw her. She replied, with a sly smile: “That’s ‘cause I left out the secret ingredient, and if I tell you I’ll have to kill you.” Last year I met a grandmother who told me that she was planning to give her recipe collection to just one of her three children because she’d determined that the other two lacked the culinary talent.

Just as most White Fish Bay residents don’t like it when outsiders take an un-nuanced approach by calling their city a collection of racists, many north side Milwaukeeans don’t take kindly to the “Food Desert” label either. It’s a judgmental and one-dimensional term that implies a barren landscape where nothing will grow. It’s a word that does not invite further investigation. It implies the need for a solution that is imposed on people and not with people.

Like a lot of Midwestern cities, Milwaukee has its problems when it comes to food. But I also see potential. In future columns I will write more about some of the healthy foodies that I’ve gotten to know.

A reader responded to last week’s query about banana-and-mayo sandwiches by telling me that her Milwaukee family eats peanut butter and pickle sandwiches. Really?  What kinds of pickles? Kosher dills?  Gherkins? Someone please tell me before I try this myself.