Once the top transit option, Milwaukee’s lakefront could become a more important player. Third in a series. 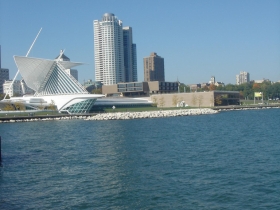 In the early years of Milwaukee’s history, the lakefront was its only gateway. What greeted those early visitors was a natural port: the bluffs rose above the lakefront from both the north and the south, dropping to a confluence of three rivers that emptied into Lake Michigan. At a time when anything that traveled — humans or goods — moved on the water, the discovery of our port and its rivers was like finding a pre-constructed interstate highway system.

Milwaukee’s inhabitants quickly moved to maximize its advantages, filling in wetlands to build near the port, tearing down the river bluffs and doing landfill along the river to build up its banks, and enlarging Jones Island to expand the Port of Milwaukee.

In 1926 an ambitious project to create parklands along the lakefront was completed along with Lincoln Memorial Drive. Over the years governments and non-profits created McKinley Marina, Bradford Beach, War Memorial Park, The War Memorial, the Kahler addition to the War Memorial that expanded the space for the Milwaukee Art Museum, the Calatrava addition to the museum, Discovery World and Summerfest.  All offered recreational opportunities for citizen and visitor alike. The land, according to agreements with federal and state governments, cannot be used for non-public uses.

Today, there is much more emphasis on the lakefront as a recreational resource than a port for passengers or freight from other Great Lakes cities or foreign countries, even though the St. Lawrence Seaway gave ocean going vessels access to what is often dubbed the Inland Seas. Much of the traffic has been replaced by truck shipment of goods and highway and air travel for passengers. While shipment of bulk goods — coal, cement, gravel and salt — remain profitable to ship to and from our port, traffic is not what it once was.

As for passenger service into the port, it’s now limited to a couple of cruise ships that stop on their circuit of the Great Lakes and the high speed ferry, Lake Express. The cruise lines provide on-shore travel for passengers from the dock at the end of Pier Wisconsin. Lake Express passengers are dropped off at a terminal on the south side of the port; they are free to bring their car, motorcycle, or bike with them, rent a car or take a cab from the ferry’s drop-off point.

Many visitors (including a steady flow from Chicago) come to Milwaukee via recreational boats. The South Shore and McKinley marinas are obvious destinations for these folks,  particularly if they are seeking overnight accommodations and services like fuel, water and head pump out. Transient slip rentals at McKinley are $36.75 plus $2.25 per foot over 25 feet.

If visitors are just overnighting in Milwaukee the marinas are fine, with some dining options and normal beach activities. But speaking as a frequent cruise visitor to Door County, what a recreational boater typically needs is access to a grocery store, preferably one with ice and beverages. My suggestion to cruising visitors is to come up the Milwaukee River to Water Street (there’s public dock space just south of the St. Paul Avenue bridge near the Milwaukee Ale House) and shop at the Milwaukee Public Market and check out the many dining choices in the Historic Third Ward.

If you’re more interested in our museums and downtown scene, overnight dockage is available at Lakeshore State Park and Discovery World (caution: you won’t get services at either location, but you will be closer to attractions.) Discovery World charges $20 for daytime dockage and $65 for overnight dockage regardless of size of vessel. Lakeshore State Park has an online registration form and charges $1.50 per foot per day

There is a trolley running from the front of the Milwaukee Art Museum that takes you through the heart of the city. Bus transportation is more difficult as it requires a hike up the bluff to Lincoln Memorial Drive. From Discovery World / Lakeshore State Park, walking up to Wisconsin Avenue will get you to a bus to almost anywhere in the city if you know the system’s routes. You might be able to hail a cab or (more likely) call one to pick you up. (Ask for a quote as to the cost to your destination.) From McKinley Marina, limited access to the bus system is available if you walk up the bridge at Brady Street.

Which brings us to the major problem for our beloved lakefront. Visitors or locals all have the same problem, coming or going to or from the city itself. Lincoln Memorial Drive is the proverbial river that’s difficult to cross without a car. Parking on the lakefront is severely limited. Because of this, the adjoining neighborhoods on the bluff are flooded with transient traffic during hot days of summer and lakefront events. Often this leads to the police closing off traffic to Lincoln Memorial Drive and sometimes stranding locals for long periods of time as they simply can’t, as the old saying goes, get there from here.

And public transportation is limited. From the west there is the route #21 bus which stops at the end of North Avenue. The route #30 bus and the GreenLine route tread the bluff on Brady Street and Prospect Avenue, but serious options such as express buses (the sort that go out to Miller Park on game days or shuttle folks to Summerfest) do not exist. I understand this is budget issue for the Milwaukee County Transit System, but I wonder if it has ever considered the costs (and lost revenue) of not attempting such services.

Of all the city’s gateways, the lakefront is the most talked about, least understood and most undervalued asset. As I write this, there is a committee looking at the future of the lakefront. Among their recommendations, one item, sadly, has failed: the state Department of Transportation refused to build a bike/pedestrian right of way across the Hoan Bridge. Given that failure, I question whether a major re-direction of on and off ramps to the Interstate 794 expressway to accommodate a more pedestrian-friendly lakefront will ever happen.

Making the lakefront more accessible is surely a no-brainer. The waterfront, after all, is why Milwaukee was created. Everyone should have an opportunity to enjoy one of the most beautiful natural resources in the world.

Other articles in the Gateways series: