The Option of Urbanism

More and more Americans are voting with their feet to live, work, and play in urban neighborhoods, but the government and big banks have been slow to respond to this change 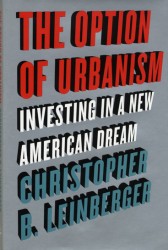 The Option of Urbanism by Chris Leinberger

More and more Americans are voting with their feet to live, work, and play in urban neighborhoods, but the government and big banks have been slow to respond to this change. In The Option of Urbanism: Investing in a New American Dream author Chris Leinberger explores the disconnect between what types of built environment people increasingly want, and how the market is often incentivized to build the exact opposite.

The Option of Urbanism begins by exploring the exact opposite of the book’s title. Leinberger spends much of the early part of the book examining how and why the suburbs as we know them today developed. He credits the Interstate Highway System as the biggest catalyst for this growth.  He notes that a one-mile increase in the drivable radius adds three-fold to the amount of land available for development, which paired with government policies tilted towards suburban growth fueled greenfield development after World War II.

While much of suburbia was originally dominated by housing, The Option of Urbanism examines how Wall Street helped spur office and industrial development on the urban fringe by the reduction of real estate to the “nineteen standard real estate product types.” These standardized product types are by-and-large car-oriented, and allow collections of them to be easily traded on Wall Street. The author demonstrates how this new financing structure fuels short-term decision making over building and holding and has lead to the commoditization of real estate.

This suburban growth had numerous consequences, both positive and negative. On the positive side, drivable sub-urbanism has allowed countless Americans to have “a piece of dirt to call one’s own,” and made housing cheaper, amongst other positive side effects. On the down side, Leinberger notes it has also led to auto-dependence, the concentration of poverty, job access issues, a decline in water quality, and more.

The rediscovery of walkable urbanism is exemplified in television, Chris Leinberger argues. During the post-World War II suburban growth boom, popular television shows were set in the suburbs (Leave it to Beaver, The Dick Van Dyke Show, and The Brady Brunch). The 1990’s and 2000’s were marked by a return to television with a setting in walkable urban neighborhoods, this trend was exemplified by Seinfeld, Friends, and Sex in the City (it seems it could be argued that Manhattan may have been as much in vogue in that period as walkable urbanism).

The author spends much of the later half of the book exploring the evidence that walkable urbanism is in demand. He examines a visual preference survey that shows consumer demand for walkable neighborhoods (it not surprisingly is split close to 50/50 nationwide, similar to our electorate). He also looks at market studies that have found pent-up demand for residential and commercial walkable urbanism.

Christopher Leinberger concludes that the suburbs will still exist in the future, but an increasing number of people are choosing to live in a walkable urban neighborhood. He ends by noting that “the only question is whether the market will just take its course over many decades or whether walkable urbanism will be part of new American domestic policy to speed up the process. Either way it is coming.”

Where the built environment is headed…

So what is it going to be over the next generation: continued low-density, drivable sub-urbanism or a shift to compact walkable urbanism or some combination of the two?

I argue that demographic trends, consumer preferences, an emerging new version of the American Dream, and recognition of the consequences of drivable sub-urbanism are all pushing the pendulum back. The United States is on the verge of a new phase in constructing its built environment.

This book is impressively short at 150 pages. It’s an easy read, but not overly simplified in any way. I would have enjoyed greater depth on a few subjects, but that easily could have sprawled the book to 400 pages. If you’re looking for an introductory book to urban real estate economics and the evolution of cities, this is a good book to consider.

2 thoughts on “Book Review: The Option of Urbanism”