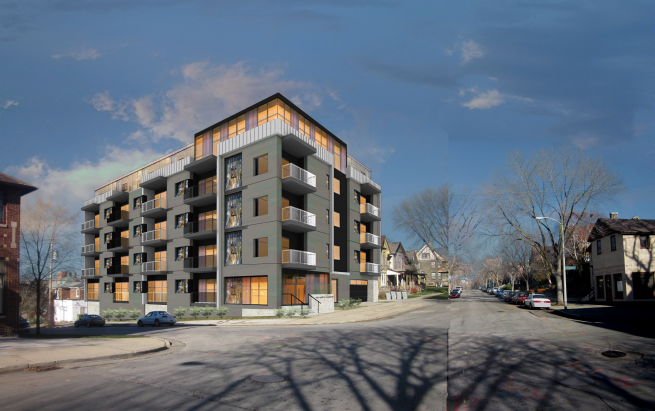 Dermond Property Investments’ request for a change in zoning for the properties 1601 N. Jackson and 522 E. Pleasant, the former Joey’s Restaurant location, from Local Business (LB2) to a Detailed Planned Development (DPD) was once again before the City Plan Commission.  The proposal was required to go back before the City Plan Commission, because the number of rental units in the proposal had changed.  The developer now plans to build a five-story 36-unit residential apartment building that will consist of one-bedroom apartments and studios.   In excess of the existing zoning requirement of 18 off-street parking spots the building will include 38 parking spaces, 36 spaces for resident use, and two spaces for guest use.

The project had been held at the Zoning, Neighborhoods & Development Committee to allow for the developer to work with the neighborhood in producing a design more acceptable to residents.  At that meeting, the complaints cited by the neighbors and Alderman on the committee, included that the building didn’t fit with the neighborhood, would negatively impact parking, was set to close to the street, and was too blocky.

In an attempt to address these concerns multiple changes were made to the original design.  Originally, the the building was to be setback two feet on the North side, and not at all along the East side.  The new design sets the building back 18 feet on the North side, and five feet on the East side.  The new design attempts to alleviate the blocky feeling by further articulating the building through projecting the balconies further out, and cutting back on its width.  Further, the new proposal includes an increase in the number of parking spots from 34 to 38.

Despite the changes a handful of residents spoke in opposition to the development.  The primary concerns continued to revolve around the scale and density of the building, and the potential parking issues new residents could creating.

Alderman Kovac, who represents the area, noted that this proposed building’s height is within the current allowed zoning for the site, and that parking concerns aren’t enough for him to oppose a project.  He summarized his position on the project saying, “given the zoning, [and] given the design process we went through, I’m not opposed”.

With one vote in opposition the project was recommended for approval by the commission, and will now go before the Zoning, Neighborhoods & Development Committee.