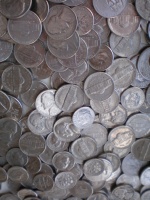 According to the Oil Price Information Service the average U.S. family spent $4,200 on gasoline in 2011.  To put it in perspective, with that much money you could buy eight iPad 2s, or eight Trek 7.1 FX bicycles, or you might even purchase one expensive cruise to Dubai to see what your gas money is building.

What if you could cut your spending on gas substantially.  Would you?  Could you?

The primary method to reduce spending on gasoline is to live in a dense walkable neighborhood that has shops and services within walking distance. Due to the degree of job sprawl that has occurred in the U.S. it might be difficult for your family to live, work, and play all in the same neighborhood, but living in a walkable neighborhood will still significantly reduce the need to drive because you will be able to replace some vehicle trips with walking trips.  For example, the ability to replace a three mile drive to the grocery store with a two block walk to the store is possible in a walkable neighborhood, but generally not possible in suburbia.  And it is the replacement of these additional trips, not just the commute to work, that can add up to substantial savings.

In addition to living in a walkable neighborhood another method to reduce spending on gasoline is to replace some automobile trips with bicycle trips.  Considering that 50% of all car trips are two miles or less, riding a bicycle for at least some of these trips is not only possible, but it is often more convenient.  Despite what some conservative bloggers may believe, it is in fact possible to carry groceries, run errands, and travel to business meetings on a bicycle.  Riding a bicycle for some trips expands the distance you can travel, beyond walking, and still allows you to avoid the high cost of gasoline.

Finally, to save money and cut down on trips to the gas station, you can use mass transit to replace automobile trips.  One year of bus rides on the Milwaukee County Transit System only costs $768.  Despite years of service cuts and fare increases, taking the bus for a variety of trips, be it commuting or just getting around, is still possible on MCTS and is still a great way to drive less and save more.

You and your family may not be able to go car-free, but quite simply to save on your gas bill live in a walkable neighborhood, ride a bike, and catch the bus.