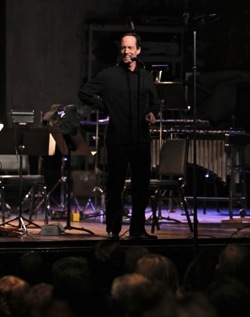 Well in advance of Saturday’s Present Music concert, artistic director Kevin Stalheim had conducted an election via PM’s extensive email list. Democracy being what it is, just a small part of the audience voted (a recount Thursday put the number over 100, topping the 60 Stalheim reported to me on Wednesday). The few voted wisely, to the benefit of the many. The big audience appeared to have a great time, and lots of people hung around for the post-party with the fabulous Squeezettes.

And now, the winning candidates:

Anna Clyne‘s Primula Vulgaris: Clyne pits motor-rhythm melodies against drones and static harmonies in this single movement for string quart, from 2000.  She never lets go of this simple idea, which gives the music taut unity. Variety comes from all manner of fantastical variations not on the starting melody but on the idea. Vulgaris reminded me a little of Bartók here and there, but Clyne showed great originality in harmony and melody and in the way she contrasted episodes via texture, length and mood. Terrific performance by Naha Greenholtz and Eric Segnitz (violins), Erin Pipal (viola) and Adrien Zitoun (cello). 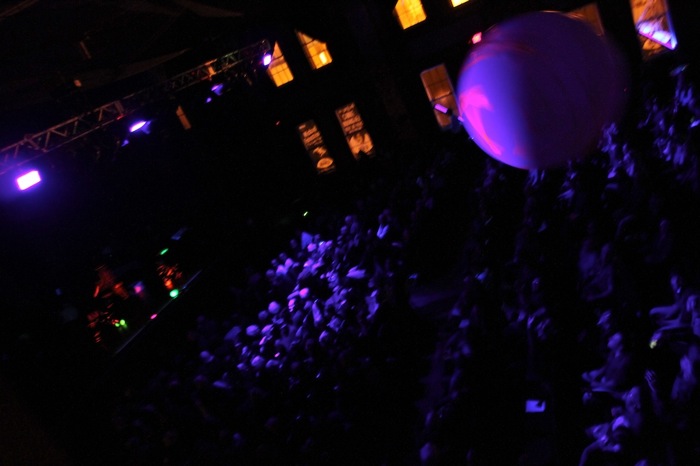 Matthew Hindson‘s Comin’ Right Atcha (2002): The ostinato, the favorite device of a whole generation of post-Minimalist composers, meets funk in this funny and affectionate send-up of James Brown‘s band and whatever else popped into Hindson’s head. A nervous, infectious hi-hat solo (Smirl, at the trap set) kicked off a sort of Cubist scattering of funk elements. James Brownian shouts blurted from trumpet (Don Sipe), trombone (David Lussier) and clarinet (Helmers), as everyone got funky with the violent syncopations and abrupt stops characteristic of Brown. Then everything calmed down. Sipe played a lonely, lovely, muted solo, and we wandered into Cubist Gershwin land and then to its neighboring country, Swing. Lussier, amid a beautiful solo, quoted Tommy Dorsey in Sentimental Over You, which charmed laughter out of the audience. Cellist Zitoun took us into the 1960s with a furious solo a la Hendrix. Segnitz marked time with pizzicati in a suspenseful transition, which eventually returned us to Funky Town for a big finish. 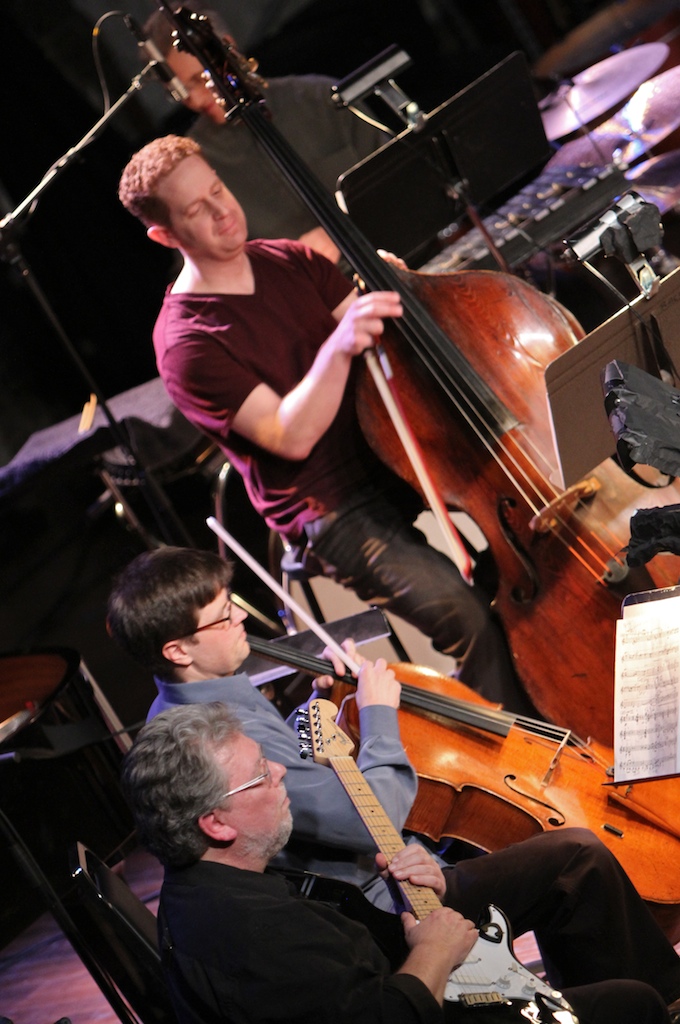 Nick Brooke‘s Menace (Sousa Medley), from 2011, does for marches what Hindson does for funk: Slices, dices and remixes familiar bits into something new, live in real time. But where Hindson abstracts the essence of funk, Hindson gleefully pitches around recognizable fragements from Stars and Stripes Forever, Semper Fidelis and so on into a raucous burlesque for piano, electric guitar (Segnitz), bass (Andrew Raciti), clarinet, cello and percussion.

Timothy Andres‘ The Night Jaunt (2006): You know that feeling of calm speed and momentum you get when driving down a smooth road at night? No bumps, no scares, just in the groove, one with the car and the road and the moonlight? I hope so, because it’s wonderful. The gentle pulse of Raciti’s plucked bass, the fleet, effortless ribbons of melody spinning out from guitar, flute (Marie Sander), piano and clarinet recreated that feeling. The music came to a gentle stop and stood still on resonant chords as open as the starry sky over two-lane blacktop in the middle of nowhere.

Caroline Mallonée‘s Throwing Mountains (2003) is low music: Bass clarinet, bass, cello and piano trade rumbling snarls at the start. Those snarls settle into repeating figures (more ostinatos!). They’re layered and interlocked. They mesh like components in some juggernaut, multifaceted machine in which gears can miraculously change size and function on the fly. Sometimes it runs smoothly, sometimes it goes off kilter with weird accents and meters. Fascinating, and all the moreso when the machine restarts after a dreamy interlude with yet another beautiful Zitoun cello solo.

The late Donald Erb‘s Souvenir, the grand finale, was not on the ballot. Compared with the Blue Man Group show going on at nearby Uihlein Hall, Erb’s 1970 Happening looked scruffy and low-tech, with its black lights, Silly String, single weather balloon bounced through the house, barrages of day-glo ping pong balls and dozens of musicians in a surround-sound rave-up. Nonetheless,  it was lots of fun and got everyone in the right frame of mind for the Squeezettes, who paraded in with their snare, sousaphone and three accordions about the time the last ball stopped bouncing.