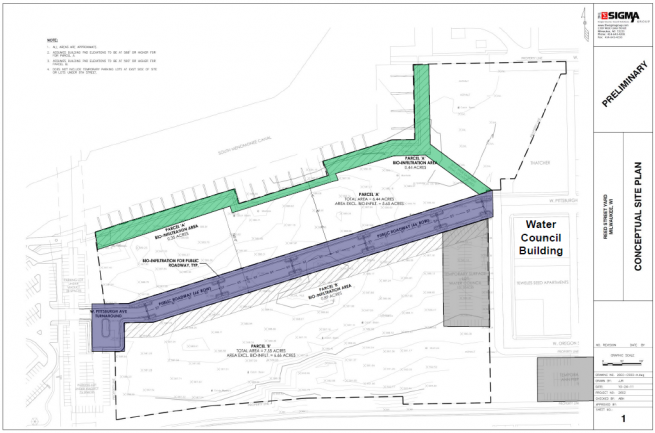 At the December 13th, 2011  meeting of the Zoning, Neighborhoods & Development Committee, a zoning change and a proposed Development Incentive Zone (DIZ) overlay were approved to allow for future development of the Reed Street Yards.   The 17-acre property, located between South 6th Street and South 3rd Street, is being redevelopment into a water research and development park in a collaborative effort between City of Milwaukee, the property owner Peter Moede, and General Capital Group.  With this approval the property’s zoning will be changed from Industrial Heavy to Industrial Mixed to allow for a greater range of development opportunities.  The DIZ includes the public connections to the river, the new street configuration,  accommodates phasing in the development, and allows standards to be applied that are compatible with the context of the area.  Additionally, the change creates a requirement for approximately 70% building frontage to the street, 40-foot easement along the river, the requirement of pedestrian access points generally no more than 500 feet apart, and does allow for some interim surface parking on the lots south of the extended Pittsburgh Avenue.

This was just another step in the process toward redeveloping the Reed Street Yards.  The property recently received approval for a tax-incremental financing district that will fund the construction of public infrastructure, including the $3.6 million extension of Pittsburgh Ave., new water mains, new sewer connections, 2,700 feet of riverwalk, an extension of the Hank Aaron State Trail, 300 feet of dock wall that is in need of being repaired, and site remediation.

These changes will now go before the full Common Council for approval.

To see renderings of the possibilities for this site, click here.