In 1992, Marquette proposed closing Wisconsin Avenue to vehicular traffic between North 11th and North 16th streets, as well as one-block sections of North 12th and North 13th streets between Wisconsin Avenue and Wells Street. The project was called Avenue Commons and the intent was to create a pedestrian mall in the reclaimed roadway. At the time, Wisconsin Avenue was three-lanes in each direction and Marquette was a school in flux with financial challenges and a perception of having an unsafe campus. Closing a section of Wisconsin Avenue was intended to make the campus safer and more attractive, and the closing would have had a big impact on the university and city, but would it have been positive? 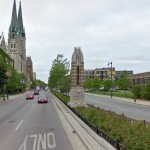 Today, Wisconsin Avenue includes two lanes in each direction as it crosses the Marquette University campus. In addition, it includes wide sidewalks, a sizable, attractively landscaped median complete with Marquette branding, and curb space for bus stops and parking. At the time of the proposal, Wisconsin Avenue had three lanes of traffic in each direction, which enabled traffic to speed through the Marquette campus. It also lacked the wider sidewalks, and only had a small median complete with run-of-the-mill street lights. It was far from a grand avenue, and did little to make the campus seem worthy of one’s attention. Wells and State streets were also a one-way street at the time (they were converted to two-way traffic from 11th to 27th streets in 2004), further painting the campus as a mere pass-through on the way in-and-out of downtown.

In April of 1994 at the direction of the Common Council, the City Engineer coordinated a study (see: Footnote 1) of the impacts of the proposed closures, primarily on the existing transportation system. The report contains three alternatives for handling the displaced traffic, No Build, Alternate Route, and Tunnel. Ultimately, the Common Council adopted none of these plans, but for the sake of debate let’s examine them.

The study includes a large amount of data, the most important of which I have attempted to include  in the scanned images shown below in the photo gallery. Of note, the closure of Wisconsin Avenue would have not only directly impact more than 22,000 vehicles per day that used the very stretch at that time, but 1,081 bus trips, totaling 17% of MCTS’s total buses in operation at the time, and approximately 22,000 daily riders.

Given the odd path the proposal took through the Common Council, and how divided the community was on the issue, there are a substantial number of articles available in the Google News archives about the topic.

Of interest, at one point covering Interstate 43 with a plaza was discussed as part of the plan. Something we’ve discussed in the past.

The No Build alternative was merely that. Close the streets to vehicular traffic at a cost of $212,000, and not provide a new thoroughfare. Buses were anticipated to be rerouted down to Clybourn Street, with an anticipated loss of 416,300 rides a year for an annual impact of $1,109,100 to MCTS. The City was expected to lose $58,600 annually. Most significant, traffic was expected to climb on Wells Street by over 30%, and on Clybourn St by nearly 60%.

This option clearly would have been the cheapest when considering the capital costs of implementing it, but it likely would have produced highly undesirable results. The additional roadways would have seen a significant increase in traffic, which would have made them nearly as bad to cross as Wisconsin Avenue was at the time (and arguably defeated the purpose of the closure). In addition, the closures would have made it more difficult to access the campus, especially given that there was no plan to convert Wells Street to two-way traffic with this alternative. Confusion to general motorists as to why a street abruptly terminated would have been a persistent cause of backups. 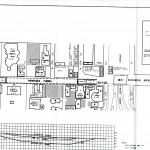 I can’t imagine a tunnel was ever a serious consideration, and digging through the archives of the Journal and Sentinel seem to confirm this. Never the less, the plan called for $30,070,000 to be expended for the construction of the tunnel as well as sewer and water infrastructure relocation. Not budgeted was relocation of utilities from the Wisconsin Gas Company, Wisconsin Electric Power Company, and Ameritech. Who would have been liable for the utility relocation if the tunnel was built? Your guess is as good as mine, but it bears a bit of similarity to the current debate over the utilities and the Milwaukee Streetcar, as well as a major road project that occurred next door and required millions in utility relocation expenses, the Marquette Interchange. While providing a vehicle-free street to those above, the tunnel was expected to cost the City $46,400 annually in lost revenue and operating/maintenance costs, as well as having caused MCTS to lose 93,275 rides a year for an annual impact of $176,550.

Why this option was studied is unclear, because I can’t imagine a single scenario where Marquette, the City of Milwaukee, or the State of Wisconsin would have paid for this. Ironically, there were formerly tunnels under Wisconsin Avenue, but they were for pedestrians. They were in place from the 1930’s to the early 1970’s and were ultimately closed because of safety concerns.

While this option may have had the smallest impact on the city as a whole by still allowing traffic to flow in a near grid-like fashion through the area, I think it ultimately may have impeded access to the center of Marquette’s campus by forcing those coming by car, bus, or, at the time proposed, light rail to enter from the outside, instead of allowing street grid access to the heart of the campus today. All that in addition to the fact that the money just wasn’t there for this option. 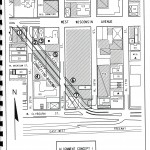 The Long Diagonal Connector would have pleased motorists greatly over the no-build option. It would have included the acquisition of property for a new roadway that connected West Wisconsin Avenue with Clybourn Street between 16th and 18th streets, allowing smooth access around the campus. It seems likely there would have be a great amount of political pressure applied to ensure this proposed road would be as free-flowing as possible, which in the long-run would have made Marquette seem like an island in the city by discouraging development facing it.

An additional part of the recommendation was to convert Wells Street into a two-way street from 10th or 11th to 16th or 17th streets, something that ultimately would not happen until State and Wells were both converted in 2004.

The diagonal street would have required the acquisition and demolition of buildings and parking lots, removing them from the tax-base, and no doubt influencing how and where Marquette has developed many of its recent campus additions.

It’s easy to understand how the closure of Wisconsin Avenue might have seemed logical on the surface in the early 1990’s (see: Footnote 2). Wisconsin Avenue was a six-lane road, the university was struggling, the stigma of Dahmer hung over the campus (and city), Wells and State were one-way highways, and many of the new buildings along Wisconsin Avenue weren’t even on the drawing boards (Zilber Hall, Engineering Hall, the Blood Center, etc., etc.). Wisconsin Avenue was essentially a surface highway through the Marquette campus.

The proposal was sent back and forth from the full Common Council to committee multiple times, ultimately failing. At one point then-Mayor John Norquist offered his input publicly on the issue, but although his suggestions mirror how the configuration is today, even his suggestions were ignored for years.

The Avenue Commons proposal came down to one alderman in the end, with southside Alderman Robert A. Anderson changing his likely vote from a yes (which he voted in committee) to a no. He did so apparently at the suggestion of his wife, which angered some in the community. I’m pretty certain Anderson didn’t envision Wisconsin Avenue and Marquette interacting as they do today, but his change of heart has led to Marquette becoming a school that is well integrated into the city, and a far greater asset than it was before the proposal.

Street closures are generally a bad idea, the street grid exists to provide predictable, easy transportation for all vehicle types. Cutting off one piece not only makes that area harder to access, but increases stress on other areas of the grid. Couple that overarching philosophy with the street grids challenges near Marquette, including the vast amount of one-way streets, a number of abruptly terminating streets because of the hospital and campus, and the overwhelming barrier Interstates 43 and 94 create (and the lack of bridges that cross them), and it’s clear that closing that small stretch of Wisconsin Avenue would have seriously impeded the flow of thousands of bus riders and drivers.

It took time, until the Marquette University Campus Identity and Beautification was executed in the early 2000’s, but Marquette eventually got it right. Wisconsin Avenue is now the front-door to the campus, and an asset to the city. The street has been tweaked ever so slightly to remove a driving lane and calm traffic, streetscaping in the median has made clearly defined areas for pedestrian crossing making it safer for pedestrians and drivers, and signage has been installed to proclaim to all who cross that you are entering the Marquette campus, or rather “We Are. Marquette.” 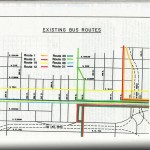 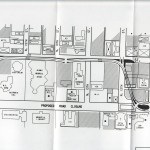 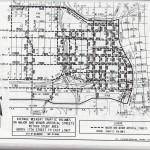 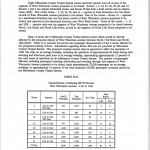 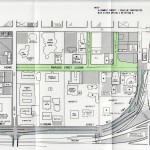 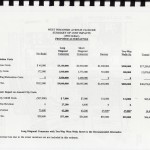 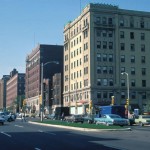 West Wisconsin Avenue in the 1974

Footnote 1 – For those interested, this report can be found at the Milwaukee Public Library. It is titled “Proposed West Wisconsin Avenue Closure – Feasibility, Cost, and Neighborhood Impact Report”. Some of the more wonk-ish reading you will ever do, but you might find it enjoyable. The scans presented in this article are from it.

Footnote 2 – The Milwaukee Sentinel (prior to the merger with the Journal) Editorial Board wrote a number of editorials endorsing the plan. They include (but aren’t limited to) editorials on April 18th, 1994, June 23rd, 1994, August 17th, 1994

8 thoughts on “Close Wisconsin Avenue Through the Marquette Campus?”