Due in large part to a reduction in state aid starting in 2012, the Milwaukee County Transit System had planned for a massive reduction in service. Thanks to some last minute creative planning by those at MCTS, the vast majority of those cuts are on track to be avoided thanks to the use of CMAQ funds. The CMAQ funds, allocated out of a competitive bidding process, will provide funding to institute “express service” for two years along a number of key corridors which will replace segments of a number of routes. A public meeting, hosted by Supervisors Marina Dimitrijevic, Jason Haas, and Patricia Jursik, on the proposed Bayshore – Airport Express service was recently held to present the service to the community and answer any questions on the upcoming questions. 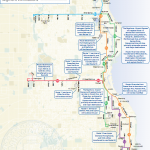 The meeting, held at the Bay View Library, was focused primarily on the changes that would occur to existing south side service (Routes 11 and 15) as a result of the new service. The meeting was led primarily by Thomas Winter, Director of Schedule and Planning at MCTS, who guided the audience through the key points of the proposed Bayshore – Airport Express route, as well as changes to existing routes within the corridor. Winter did not focus on the other proposed express service routes, but they will include a Fondy – National Express and a Capitol Drive Express (a 27th Street Express was applied for, but not awarded).

The short explanation, the Bayshore – Airport Express will connect Bayshore, UWM, Downtown, and Bay View with stops roughly every 1/4 of a mile, seven days a week, with headways of 10-15 minutes during the rush hours, and 15-20 minutes during off-peak times. The fare for the express service will be the same as standard service. It is intended to achieve between 20-25% time savings running the same route as traditional MCTS service.

Following the introduction of the service changes by Thomas Winter, and brief comments in support by the Milwaukee County Supervisors in attendance, Supervisor Dimitrijevic led the question and answer session.

This is by no means a complete digest of the questions asked, but an attempt by myself to identify the most important and/or interesting questions and statements.

Milwaukee County and MCTS have clearly been dealt a tough hand with the funding cuts to transit coming from the state budget. Despite the fact that the CMAQ funds at this point are only a two-year solution, and will result in some areas losing service, the solution is a creative one to stave off major cuts including the elimination of all Freeway Flyers, special event service (Summerfest, State Fair, Miller Park, etc, etc), and service reductions on many routes. In an ideal world, existing service would be maintained and new express service would be added on top, but given the circumstances this is a great solution to a terrible problem. 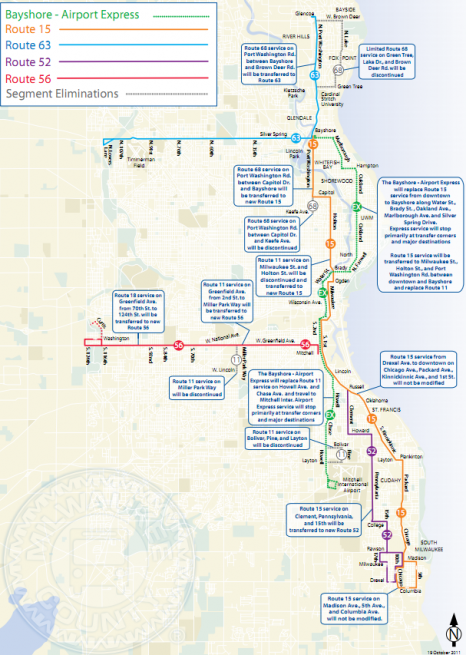