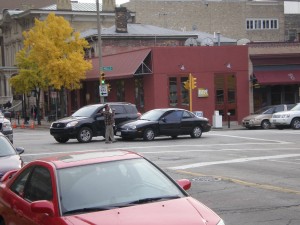 Wells St. Crash. This driver attempted to turn left from the center lane.

At Thursday’s Public Safety Committee meeting a file will be voted on that would authorize the conversion of Wells St. to two-way operation from 6th St. to Prospect Ave.  According to the Journal Sentinel, the Wisconsin Center District Board voted to oppose part of this conversion, in particular from 4th Street to 6th Street, due to “safety” concerns.  These concerns miss the big picture and can be handled while bringing the benefits of making Wells St. two-ways in downtown Milwaukee.

Well Street’s one-way configuration brings an assortment of issues that negatively impact the neighborhood it passes through.  In particular it is common to see cars continuously circling the block, because a parking spot is not easily accessible without circling the neighborhood.  Another direct result of Wells St. being a one-way street, with little congestion, and having multiple travel lanes is that people speed excessively.  This is an all too frequent occurrence.  Additionally, crashes occur when drivers attempt to turn left from the center lane, because the nature of the street doesn’t fit with the location, causing an accident. Finally, it is all to common to see are drivers heading in the wrong direction along Wells St.

A two-way street conversion would alleviate these issues while bringing benefits to the city.  A benefit is that a two-way conversion will make Wells St. more pedestrian friendly, as no longer will one need to cross a “freeway” to get across the street.  It will bring enhanced visibility to retail establishments, drawing in more of the infrequent drivers passing through the neighborhood.  Additionally, for automobile drivers it will actually enhance connectivity by reducing the need to loop around to find a parking spot or a missed intersection.  Finally, it will reduce traffic speeds along Wells St., improving safety for both the pedestrian and the automobile driver.

This change is long overdue and hopefully this is just another step toward a more connected, accessible, and safe built environment in downtown Milwaukee.