It’s Time to Bike and Walk the Hoan 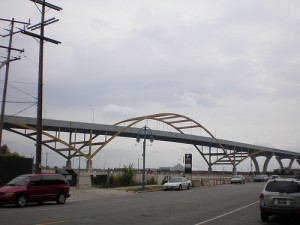 In June thousands of bicyclists will be riding over the Hoan Bridge during the UPAF Miller Lite Ride for the Arts, many of which will be signing up because it will be such a rare opportunity as the bridge isn’t currently accessible to bicyclists.  These bicyclists are coming from around the Midwest, and some like myself plan to stop and take a few pictures on the way, much like any tourist would do if giving the chance.  A chance, an opportunity, that the State of Wisconsin should explore.

This opportunity is for the State of Wisconsin to include the development of bike and pedestrian infrastructure as part of the project to create a new tourist destination for the State of Wisconsin.  At a time when the proposed State of Wisconsin budget calls for a $1 million boost in the tourism department in 2012 and an additional $2.4 million increase in 2013, likely for increased advertising with marginal returns, a better use of these funds would be to create a new tourist destination that could be a draw for many years to come.  Of course few if any people visit Milwaukee with the hope of driving over the Hoan Bridge, but if they could walk or bike over it, with the ability to stop and take pictures this would be a pretty rare, unique experience desirable to visitors of Wisconsin.  As community activist Bill Sell points on his website, Bike the Hoan, “Chicago has nothing like this bridge.”

Although we at UrbanMilwaukee.com believe the Hoan Bridge and the Lake Interchange should be be radically adjusted to allow further development in the Historic Third Ward and downtown Milwaukee it appears these options are off the table.  In lieu of realizing the potentially enormous benefits to the taxbase, creating this new tourist destination and resident amenity, could at least offer some payback to the City of Milwaukee.