When the Pfister Hotel launched its Artist in Residence program in 2009, it took some time for the public — and Milwaukee’s artistic community– to catch on. The open studio in the hotel’s main corridor begged guests to enter, with its near floor-to-ceiling windows and vivid, paint by numbers work of Reginald Baylor adorning the walls.

As Baylor prepared to pass the AiR torch in 2010, however, the program’s applicants increased exponentially, and more in the creative community began to recognize the Pfister residency as a prime opportunity to expose Milwaukee to art outside of galleries and museums — and to have local artists work seen by visitors from around the world.

“That’s the great thing about the program at a place like The Pfister,” Baylor said in a 2010 interview. “It puts art directly in front of people, often without them even knowing it.”

After receiving a very healthy number of applications for the 2010-11 program, the Pfister announced Monday that six finalists had been chosen; Anthony Suminski, Shelby Keefe, Jeremy Plunkett, Kate Pfeiffer, Steve Ohlrich and James Zwadlo. Each will have work on display in Gallerie M at the InterContinental Hotel on Gallery Night.

Now through February 13, 2011, the public can also vote for their favorite artist, either online through the Pfister AiR website, via Twitter, or by texting 22333.

In the meantime, get to know a bit about each artist: 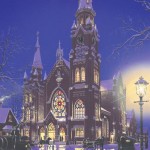 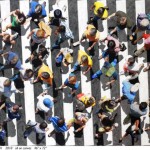 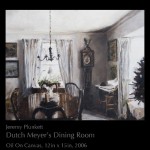 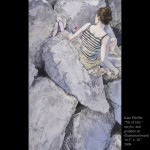 “5th of July” by Kate Pfeiffer 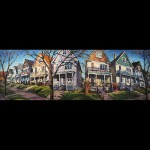 Oil on canvas by Shelby Keefe 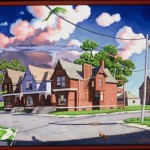 Shelby Keefe is a contemporary impressionistic painter, teacher and performance artist. Born in Whitewater, WI, she graduated in 1981 with a BFA from Cardinal Stritch University in Milwaukee. After retiring from a career in graphic design in 2005, she operates her own art studio and exhibition space in Bay View.  Her award-winning urban landscape paintings have earned her participation in prestigious national juried shows, plein air painting competitions, and arts festivals as well as garnering commission work for a variety of corporate clients and private collectors. Her oil paintings are found in collections such as The Bradley Foundation, Acuity, Northwestern Mutual, Ozaukee Country Club, WE Energies, and other businesses around Milwaukee, and in private collections in Wisconsin and around the country.

Steve Ohlrich is a classically trained artist who comes from an artistic heritage including painters and wood workers. He explores imaginative and metaphysical narratives through surrealistic imagery.

Kate Pfeiffer received her BFA from the Rhode Island School of Design in 2008. She is a fine artist who works primarily in graphite, oils and acrylics, and is very interested in how amassed possessions can reflect people’s values and identities. Kate was born and raised in New Berlin, Wisconsin, where she has lived most of her life. She recently moved to Chicago, where she has been studying Art Therapy at the School of the Art Institute of Chicago.

Jeremy Plunkett’s work explores the illuminating and illusionary qualities of light within his photo-realist paintings, intaglio-based prints, and monumentally scaled charcoal drawings. He received his MFA in painting from Ohio University in 2008 and received his BFA in printmaking from Bowling Green State University in 2005.

Jeremy has participated in many national and international juried exhibitions and publications. In 2009, he participated in the 32nd Bradley International Print & Drawing Exhibition as well as taking first prize in Manifest Gallery’s International Drawing Annual. Jeremy has recently become a part-time instructor in drawing and other 2D central art courses at Carthage College in Kenosha, WI.

In high school Anthony won first place in the Journal Calendar Contest, which kindled his passion for painting. During the last thirty years he used his artistic abilities to create architectural renderings, and has now redirected his efforts to fine art painting.

James Zwadlo’s life has been divided between rural and urban — in Wisconsin and in New York. Through his work, he tries to combine the sense of space from a rural background with the social, crowded experiences of New York City and Milwaukee.