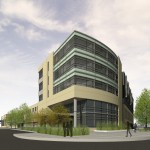 At last night’s East Side town hall meeting Mercy Housing Lakefront presented a further refined design for an $8.5 million apartment building to be constructed at the corner of N. Farwell Ave. and Thomas St. on Milwaukee’s East Side.  The original designs, presented last March, called for a 9-story, 75 unit building, but the original proposal faced opposition from the neighborhood residents in a large part due to its height.  In response to those concerns the proposal presented last night had been considerably scaled down.

Mercy Housing Lakefront is now proposing a 5-story, 54-unit, 55-foot-tall building.  The design places the mass of the building along N. Murray Ave. and Thomas St., completing the urban form along those streets, while setting back the upper floors along N. Farwell. Ave.  The new design ties together the existing US Bank building with the new structure by matching the masonry materials along the first two-stories of the new building with the US Bank building, and sets the building apart at the upper floors with a change in brick color.  The site was chosen in part because of Mercy Housing Lakefront’s desire to provide workforce housing on the East Side of Milwaukee, and in part because US Bank is a long-term investment partner of Mercy Housing Lakefront.  The plans include creating a third floor green roof, if an MMSD grant can be obtained, and applying for LEED certification.  The plan includes 48 public parking spots accessed at-grade, and one parking spot per unit for apartment dwellers.  Additionally, the new design will have curb bump-outs, a garden wall to mask the US Bank drive-thru, an additional 13 on-street parking spots, two fewer curb cuts, and a parking garage hidden by backlit storefront style windows.

The questions raised at this meeting weren’t all too different from what are faced by many East Side proposals.  Though, in this case there was a consistent theme regarding the number of East Side apartment vacancies, and whether or not this was “needed.”   Residents questioned why the parking wasn’t underground, the project’s density, impact on congestion, the use of WHEDA tax credits, and its design.  Sandra McSweeney went so far as to state “I think this building is not consistent with the neighborhood.”  The most heated topic of the night seemed to revolve around parking, despite the facts that this building replaces all of the existing public parking, adds on-street spots, and has one parking spot per apartment.

Despite the opposition, there was some support for the project.  One resident referred to the parking lot as a blight.  Jeff Jordan argued that hospital staff often have to take bus rides for over an hour to get to work, and car ownership costs between $6,000-$8,000 a year, so having the option to live across the street would help many potential residents.  Another resident, in fact a landlord in the area, made a passionate speech saying  “if we open our minds and hearts then we have to support this project.”

Alderman Nik Kovac laid out the process for approvals involved in the project.  It would need to go to the Public Works Committee on January 6th, the Zoning, Neighborhoods & Development Committee on January 11th (he didn’t mention but it will go through the City Plan Commission as well), and the full Common Council on January 19th. 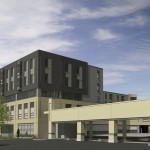 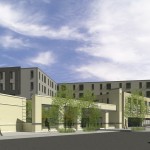 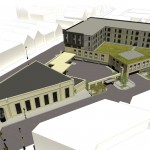