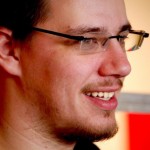 In The Syringa Tree, in a stunning accomplishment, she tackles an entire ensemble in a single evening. Madden plays 24 characters — black, white, men, women, children, servants, police – in Pamela Gein’s play about growing up in apartheid South Africa.

Gein and Madden introduce us to the central character, Elizabeth Grace, as a six-year-old. In a deeply divided South Africa, her family seems to be poised for change. Her father, a doctor, allows his examining rooms to be mixed. Her mother treats their workers as valuable members of their family. Gein weaves together parallel stories in the way of a patchwork quilt, which designer Nathan Stuber’s set resembles.

Madden eloquently guides us through the often-tangential mind of young Elizabeth, in whom she balances playful exuberance and sophistication a little beyond her years. Those qualities allow her to brave a daunting, unknown world when the powers that be start to affect her loved ones.

As Madden moves beyond Elizabeth and through the play’s roster, her attention to detail crafts well-rounded characters and lightning-quick transitions as she converses with herself. One never feels too lost among the myriad of people in Elizabeth’s life. And as characters age and change, Madden never loses their core identities. Sure, by the end of the play Elizabeth has grown up (signified by a simple tying of the waistband in Holly Payne’s clever costume), but we still recognize the fire in her spirit and the cadence of her voice.

Noelle Stollmack’s lighting defines space and location as surely as Madden defines character. Paul Hurley’s sound, too, shapes the environment and supports the storytelling, by providing both rich underscoring and striking effects to paint the aural landscape of South Africa.

Apartheid is gone, but this story is as vibrant as ever. One young South African girl reaches out to touch us all and give us a glimpse into the past. Through her eyes, we can see through apparent complexities to the core simplicity of right and wrong.

The Syringa Tree runs at American Players Theatre in the Touchstone Theatre through October 16. Tickets are $39-$64, though some performances are already sold out. Visit the APT website or call 608-588-2361 for more information.