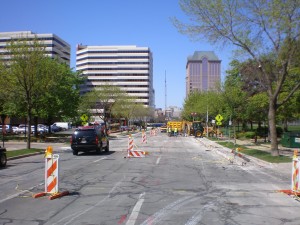 Sound familiar?  Earlier this year Wells St. was under construction, effectively narrowing the street for a period of time, and the impact on traffic was negligible.  Now, another one of the vastly overbuilt streets in Milwaukee is narrowed due to construction, and again the world hasn’t come to an end as traffic has been able to find another route or simply slow down.  This limited impact is worth repeating, as the belief that Milwaukee’s streets are so congested that we need three lane automobile sewers cutting through our neighborhoods is simply not true.

Interestingly enough, this temporary narrowing is part of the process of converting E. State St. to two-way traffic, which has been a long awaited improvement for the East Town neighborhood.  In years past East Town saw Broadway converted to two-way traffic and there were almost undoubtedly discussion that the street’s rating would drop from an “A” to an “F”, meaning traffic congestion would rise dramatically.  It certainly doesn’t appear to have happened then, and it’s probably not going to happen on E. State St. as there simply isn’t a lot of traffic on E. State St.  What will happen is it will be easier to get around the neighborhood by automobile, and E. State St. will become more pedestrian friendly, because the current one-way configuration encourages speeding.

The two-way conversion is great first step towards making the area more connected and walkable, while evidently not significantly impacting congestion, but the plan could have been better.  The plan for this two-way conversion includes express lanes, which would remove parking during “peak” times, to allow a greater traffic flow than the two-way configuration would otherwise allow.  I can only imagine that this “peak” time is the few minutes around 5:00 pm as it is petty rare for there to be more than a handful of cars on this street at anytime of the day.  Further, the two-way conversion truncates at MGIC’s offices instead of Water St., which limits the level of connectivity, and will add a level of confusion.

Overall this is a great step forward for East Town, and another example of how many of Milwaukee’s streets are simply overbuilt.