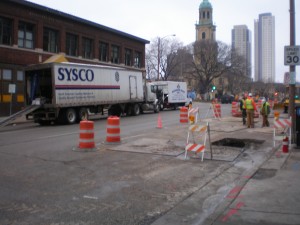 There was no file passed at the Milwaukee Common Council, business owners didn’t have to fight city hall to narrow Well St., it wasn’t some anti-car movement, it was just narrowed temporarily for utility work.

During the utility work Wells St. had one travel lane blocked off, and for awhile a parked semi truck narrowed the street width, leaving a tight squeeze for traffic to pass through.  Yes, it was just one block, and it was temporary but there wasn’t any grid lock, and no disastrous congestion.  In fact the world didn’t end.  People still got home, stopped in at Taylor’s, visited Cathedral Square, and grabbed a burger at Elsa’s.

What wasn’t seen?  The daily race of commuters trying to save that 15 seconds by speeding down Wells.  The pedestrian hurrying to cross three lanes of traffic before the light changes, and the drag race begins.

I mention this, because whenever a reduction in travel lanes or even the idea of configuring downtown streets for two-way traffic are brought up fears over congestion and grid lock are raised.  And more often than not these fears are overblown.

The downtown plan calls for the converting of more of downtown’s one-way streets to two-way streets and in particular Well St. is one street that should be converted in the near future.  Hopefully elected officials, business owners, and residents won’t buy into the fears and remember that the world didn’t end.