One Percent. It’s a Start. 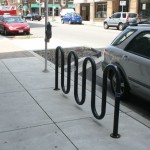 Tom Held of the Journal Sentinel reports in his article, Census says: more bikes on the road in Milwaukee, that “The number of Milwaukee workers who bicycled to their jobs more than doubled from 2006 to 2008, and now accounts for more than 1% of the total commuter traffic.”  What’s significant about the 1% ridership is that it has a doubled recently, and is actually above the U.S. national average of .5%, so progress is being made.  Although, still small, it is a start.

Of course there will be some who say “one percent who cares” or “why spend money on such a small number of people.”  But encouraging more ridership is good for Milwaukee as it can, in the long run, reduce congestion and parking needs, improve the health of our residents, and raise the quality of life for all of our residents, not just bicyclists.  To see these ridership numbers continue to rise it is important to recognize that to some extent it is the infrastructure priorities that sets the mode choice.

Cities around the world have been able to obtain higher ridership numbers by overtime implementing small incremental infrastructure improvements.  For example, Portland has seen its ridership numbers top 5.9% (or more), and Copenhagen has hit heights of 37%.  Here in Milwaukee the addition of new bike lanes, bike racks on buses, and a variety of awareness programs have all contributed to this increased ridership, but as these other cities have shown much more can be done.

In the area of infrastructure there are a variety of options that could be invested in to further increase Milwaukee’s ridership numbers.

Do you have any other suggestions?