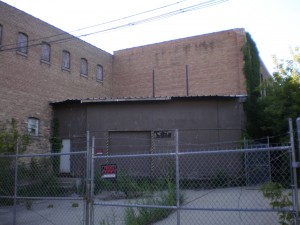 At the Thursday July 23rd meeting of the Zoning, Neighborhoods & Development Committee the appeal of he interim historic designation of the Hide House complex in Bay View was heard.  The Hide House complex is made up of a series of buildings constructed over decades with the earliest buildings dating to 1898.  At earlier meeting of the Historic Preservation Commission Alderman Tony Zielinski‘s nomination of the complex for interim historic designation was approved.  General Capital Group and Joseph Property Development were appealing this nomination as they intend to demolish a portion of the Hide House complex built in the 1940’s to construct an affordable housing apartment building.

Deputy DCD Commissioner Martha Brown explained that the official staff report recommended designation of the 1898 buildings, although not the 1940s buildings.  Alderman Zielinski , took issue with this characterization of the staff report saying the front line historic preservation staff who don’t have any political motivations recommended interim historic designation for the entire development.

Bruce Block, the attorney representing the developer, pointed out that the development team has in the past “received national recognition for development excellence,” and that the proposed building, and use are allowed under the site’s current zoning.  Further he noted that it wasn’t until they had obtained a building permit and WHEDA tax credits that Alderman Zielinski requested the interim historic designation.  He laid out the reasoning for the appeal.  The major points were that the case for designating the structure is marginal at best, the 1898 portion is not at risk, rehabilitation of the 1940’s section is not economically viable, the proposed project is within zoning, and the project is consistent with Southeast Side Plan.

Reference was made to a December 2006 Business Journal article in which the developer stated their intention to demolish a portion of the Hide House complex to build condominiums.  At the time no nomination for historic designation was brought forward by Alderman Zielinski, in fact it wasn’t until after WHEDA tax credits were received, and building permits were pulled that the papers were filed.  There was debate over whether or not the Southeast Side Plan supports this type of project.  Attorney Bruce Block pointed to page 94 while Alderman Zielinski fired back pointing to page 99 on the plan saying that it contradicts the developers view of the plan.  Bruce Block expressed the development team’s belief that historic preservation laws are being misused in this case saying “it’s an inappropriate use of the city’s landmark ordinance.”

Alderman Zielinski brought his own theory to the table indicating his belief that there was something unusual going on saying that “basically what we’re seeing here is the executive branch using their pull and power to override the interests and the will of the neighborhood.”  He also on numerous occasions railed on about the lack of a community meeting, and specifically stating “there’s a big difference between an open house and having an actual public meeting.”

The development team had contacted the Wisconsin Historical Society and hired John Vogel, Ph.D., of Heritage Research LTD, an expert in the field of historic preservation, when this issue arose to determine if an appeal was warranted.  The Wisconsin Historical Society found that the Hide House complex consisted of unremarkable architecture, and was no nexus to Milwaukee’s tannery industry.  Specifically the Wisconsin Historical Society findings indicated that no portion of the project would be eligible for protection under history or architecture.  John Vogel , Ph.D. remarked “is something significant simply because it is old?  The simple answer is no.”  He explained that the Hide House was not the headquarters building, and it was not the primary facility of the Greenbaum Tanning Company.  Further, the structure itself has no distinguishing features of an architectural type, and lacks any company branding.  He went on to point out that it is not a unique example of south side industrial architecture, and that numerous other buildings of this style still exist on the south side.

Sig Strautmanis, one of the developers, explained that “the vast majority of the space have been vacant for decades,” which has led to the serious decline of the 1940’s buildings.  Just a few of the issues included items such as roof sections collapsing, structural slab failure, severe water damage, and some of the buildings were built with salvaged brick which is deteriorating.  He added that they don’t allow employees into these buildings anymore and that “this is beyond repair and salvation.”  Additionally, he explained that these buildings are functionally obsolete.  Saying that “the layout makes no sense,” the floors don’t line up, and some levels have no windows in large parts of the building.  He also explained that yes at one time the apartment building would have needed to go before BOZA for a variance, but that they had adjusted their plans to insure it conformed to the current zoning.  Referencing the nomination for historic designation he said “needless to say, the timing isn’t curious, it’s blatant frankly.”  Finally, he stated his belief that the opposition “isn’t about history,” that in fact “this is about thwarting a high quality affordable housing project”

A large number of Bay View residents spoke in opposition of the appeal.  The general argument for historic preservation spoke of the working class history of the neighborhood, and that the Hide House complex is part of this history.  It was said that Bay View workers  put their blood sweat, and tears into their homes, and the tannery.  Sandy Palokonis, a Bay View resident, summed up the opposition’s argument for historic preservation stating “it’s part of our houses, it’s part of working man’s history.”  Another common thread that rang through was that the neighborhood felt a community meeting should have been held regarding the project.  In addition to the dozen or so people who spoke in opposition, seven additional neighbors were counted in opposition.

There were residents, and tenants of Hide House that spoke in support of the appeal.  Marilyn Walczak, expressed her belief that the reason behind the interim historic designation “has nothing to do with historic preservation” she indicated that from what she’d seen that the opposition was about the low-income housing component.  Gibson Bathrick , whom initially attempted to redevelop the Hide House, explained that precedences had already been set at Hide House as other structures had been demolished due to safety concerns.  He added that redevelopment of the north end “wasn’t in the cards,” and that “it’s just not feasible.”

Assistant City Attorney Gregg Hagopian pointed out that “interim designation is on a structure basis,” not a complex basis indicating that the action taken by the Historic Preservation Commission may not be in line with the ordinance.  Recognizing the implication and in a clear attempt to find a balance between the needs of the community, and the rights of the property owner, Alderman Murphy made a motion to in effect “split the baby,” and designate buildings 1,2,3, and 4 as historic.  In reference to the other buildings he stated “in my opinion [they] don’t meet the definition of what is historic.”  Alderman Zielinski opposed the motion saying “I don’t follow the argument of splitting the baby.”  The appeal was granted on a vote of 3 to 2, in that it removed the historic preservation designation from buildings built in the 1940’s.  This action will now be taken up at the next meeting of the full Common Council.