There might be a new development style taking hold in Milwaukee.  A lot of focus is put on transit-oriented development, and the power of a station to improve the development of a neighborhood, but what about residence halls?  Do they offer similar development when built in an urban setting? At least in one part of Milwaukee’s East Side neighborhood, it appears so.

As review, transit-oriented development according to the Wikipedia is..

A transit-oriented development (TOD) is a mixed-use residential or commercial area designed to maximize access to public transport, and often incorporates features to encourage transit ridership.

What is dorm-oriented development?  I propose it’s the increased commercial development in the parcels immediately surrounding the residence hall, or in the residence hall itself.  It comes primarily in the form of retail establishments ranging from restaurants to clothing stores. 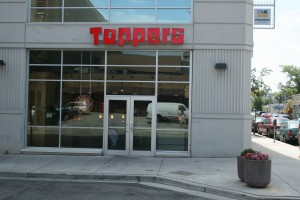 There is no doubt that students bring with them a level of purchasing power.  This is no more clear than in Whitewater, Wisconsin where, despite the town’s small size, numerous retail establishments are spread across the site as a result of the University of Wisconsin-Whitewater.  However, dorm-oriented development, I propose, is more than just the mere presence of numerous auto-centric, retail strip malls.  Dorm-oriented development is the urban assimilation of a residence hall into the neighborhood, and the corresponding commercial hub the residence hall creates. 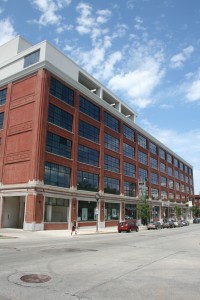 Kenilworth Square Apartments as seen from Prospect Avenue. This side of the facility includes the Peck School of the Arts, American Apparel, and Urban Outfitters.

The best example of dorm-oriented development in Milwaukee is currently UWM’s Kenilworth Square Apartments.  The facility is built to the curb in a pedestrian friendly nature, features numerous street parking stalls as well as curb bump-outs, is in an already urban neighborhood with some-level of established retail presence (Vox, Yield, Alterra), and most-importantly features outward-designed, first-floor retail stalls.

Unlike a shopping mall, Kenilworth Square Apartments didn’t open overnight with numerous retail establishments.  It took time for the stores to develop.  Anytime Fitness, Urban Outfitters, American Apparel, and Toppers Pizza opened separate from each other over the course of a year.

What makes a residence hall different from an apartment or condo development is the very resident of the building.  The resident is the key to the success of dorm-oriented development.  Take for example New Land Enterprises City Green Apartments, the facility has been open for well over a year, if not two, and still has yet to see a single retail tenant (the same goes for New Land’s Sterling Condominiums near UWM’s Kenilworth building).  There are a lot of reasons this could be possible, it’s hard to imagine a building filled with students having empty retail stalls for that long.

601 Lofts, a condominium development on the corner of Ogden and Jackson, has seen its first-floor retail space fill.  That space is however filled with a radically different type of tenant than Kenilworth Square is, a rug store, art/antique store, and an accounting practice.

The purchasing habits of a full-time student are clearly different from that of a working professional, and the first-floor tenants of such buildings appear to reflect that.  Dorm-oriented development generates something much more akin to a shopping mall and more appealing to a younger crowd.

The future site of the Latitude Apartments by Dermond Property Investments.

It should be interesting to watch what type of commercial establishments take hold in the Latitude Apartments, a mixed-use Dermond Properties (originally New Land Enterprises) project under construction across the street from the Kenilworth Square Apartments.  Will they continue to reflect the purchasing habits of college students or will they be more geared to the young professionals who work at the nearby hospital (who the apartments were at one time targeted for)? 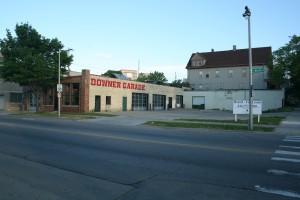 The Downer Garage is now for lease as a retail establishment.

There is evidence already that dorm-oriented development will happen nearby.  Wangard Properties has purchased the former Downer Garage and is looking to lease the facility to a retail tenant.

Of interest also will be the development of a new dorm for MIAD in the Third Ward.  A final site has yet to be selected for the new residence hall.

Not All New Facilities Successful

Placing the new facility directly across the river from the last UWM dorm to be built, RiverView Residence, also should help draw traffic across the bridge to any retail developments.  The RiverView Residence Hall unfortunately does not feature any first-floor retail, nor is it oriented towards the street in a pedestrian-friendly nature (instead aligning with a dead-end side street).

The dorm was not in a great position to capture retail development in the first place because of the lack of any real retail presence outside of a gas station and Pick ‘N’ Save (which turns its back on North Avenue), but it’s still a shame the facility didn’t have more urban design elements.  When the empty lots to the west of the dorm are developed, UWM (and the UWM Real Estate Foundation) will miss the opportunity to generate any revenue from retail establishments located in the RiverView Residence Hall.

Seeing that the orderly, urban development of retail establishments and residence halls is desirable for the modern urban city, how can such a thing be cultivated?  How can residence halls be constructed so that they are a part of the neighborhood instead of a stand-alone silo? How can a retail center be constructed in a a more organic fashion than a traditional shopping mall and better assimilate into the urban neighborhood?

3 thoughts on “Dorm-Oriented Development (The Future of Urban Shopping Centers?)”