Ogden Avenue between N. Van Buren Street and Milwaukee Street has numerous retail establishments, but how well do they work together?  Quite poorly.  The groupings of stores work fairly well amongst themselves, but as an Ogden Avenue retail corridor they turn their backs on one another.

The result?  Store failings, retail space going unleased, and territorial fights over abundant parking spaces.  Problems akin to a failing suburban shopping mall, but not an organic retail corridor.  Milwaukee has numerous corridors on the east side alone that are successful or on the tip of a rebirth including Brady Street, North Avenue, Oakland and Locust, and Downer Avenue.  None of the other corridors carry the national brand strength that Ogden Avenue possesses with Chipotle, Panera, Pick ‘N’ Save, Blockbuster, Einstein Bagels, UPS, and Starbucks. 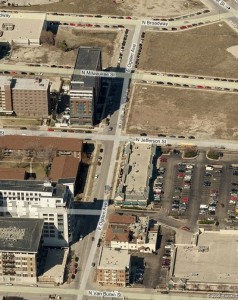 So why isn’t Ogden Avenue mentioned as a marquee landmark street like North Avenue, Brady Street, and Oakland Avenue are?

Is the lack of a transit connection the Achilles heel for Ogden?  Certainly not.  The street is served by the ever-popular 30 bus line, along with the 11 bus line.  The heavily traveled 10 line also crosses Ogden Avenue as well just east of the retail stretch.

Is it a lack of diversity that prevents growth?  Certainly not.  A full range of housing borders the street from every side, including condos both new and old, apartments both expensive and cheap, and a brand-new, mixed-use public housing facility.

Does that diversity create crime?  Not as evidenced by my subscription to Milwaukee’s e-notify service.

Parking shortages (even if it’s just a perception)?  Absolutely not.  There is a massive parking lot as part of the East Pointe Marketplace, more than ample street parking (all unmetered), and a parking lot for the former John Ernst Cafe building.  Not to mention all of that parking is free.

So what’s the issue?  The orientation of the buildings in the middle of the district (image showing storefront orientations).  Instead of facing the street like the rest of the storefronts do, the East Pointe Marketplace building that contains UPS, Einstein, Starbucks, Blockbuster, etc. faces towards the parking lot.  This is heavily detrimental to the street.  People at nearby Panera, Karma, and Chipotle don’t interface directly with the East Pointe Marketplace retail building.  If they’re coming from or going to the north they may walk past the Pick ‘N’ Save, but outside of Einstein Bagels (the eastern most tennant), there is little to no engagement by the other establishments in the East Pointe Marketplace building.

This, however, didn’t seem like much of an issue until the mixed-use 601 Lofts building opened along with the completion of the new Convent Hill building (before photo, after photo), another mixed-use building with street-level retail.  The building now has three occupied business condos, including the recently profiled IT Gallery.  Those three units interact well with John Ernst building units (Panera, etc) and likewise are well-connected with Coldwell Banker and currently unoccupied unit on the corner of Ogden and Van Buren.

The Housing Authority of the City of Milwaukee (HACM), owner of the Convent Hill building, has yet to lease either of its retail units despite being within 100 yards of some of most recognizable retail stores in the country.  What should be a great walkable street starting on Van Buren and running currently to the edge of Convent Hill is certainly walkable, but far from lively or cohesive.  The back of the East Pointe building that faces Ogden Ave. isn’t horrendous, but certainly doesn’t activate the street.

This small design flaw imposes all kinds of hidden costs.  The most obvious of which is the inability for the street to market itself beyond individual establishments (you go to Brady Street, you don’t go to Ogden Ave, you go to Chipotle or Starbucks), this limits the number of potential customers any of the businesses might interact with.  This inability for the street to be perceived as a destination limits the desirability of retail units along the street lowering occupancy and failing to encourage more businesses to organically cluster.  This problem has manifested itself in the two Convent Hill units, two failed wine stores, and a long period where there wasn’t anything in the Karma Bar & Grill unit after Vivo closed.

The biggest cost though is the opportunity cost for a future development on the parking lot at East Pointe.  As it’s structured now you couldn’t replace the lot with a building because the storefronts all would be immediately adjacent to the new building, instead of the street.  The Pick ‘N’ Save building is fine, because the privately-owned portion of Jackson Street would buffer it.  So instead of possessing a great developable asset, the Mandel Group (East Pointe developer) is stuck with a giant surface parking lot that certainly isn’t the highest and best use.

A debatable hidden cost is the Park East parcel under contract with RSC & Associates that abuts East Pointe.  If the East Pointe building was orientated to complete the street it’s quite possible that Milwaukee County would have received more (and potentially better) proposals on the RFP they issued for the parcel.  Unlike non-leasing of the Convent Hill units, RSC & Associates’ inability to get their development off the ground appears to have little if anything to do with the rest of Ogden Street and is a story for another day.

Mandel shouldn’t be completely faulted for the awkward development though, as the Marketplace complex was planned well-before the new urbanism movement took hold in Milwaukee (and nation-wide).   Unfortunately, I think just about every developer in the city would have made the same mistake, especially considering at that point it was at the end of the former Park East freeway stub and the John Ernst Cafe was still the John Ernst Cafe, not three separate restaurants.

How does this situation get fixed to allow the corridor to flourish?  It’s certainly not going to be a cheap fix.  While I’m typically not a fan of TIF’s for non-brownfield or currently occupied land, one might work here.  If the city of Milwaukee was able to create a TIF or help guarantee a loan that both reversed the building to face Ogden and created an additional multi-story building on the current surface lot, it would be a huge win for the neighborhood (not to mention the city-owned Convent Hill building and adjacent land).  Unfortunately, I don’t think that’s in the cards anytime soon, as the slumping housing market would make such a deal economically infeasible at this point, along with likely complaints that would arise from other developers for giving what they would perceive as a “hand-out” to Mandel.

For now, Milwaukee is just going to have live with a painfully obvious “what if” on Ogden Avenue.