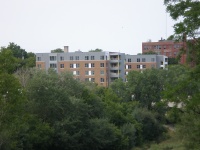 RoseMary Oliveira of the Riverwest Neighborhood Association gave a short presentation about her experience with the RiverView dorm project.  She called out former Alderman Mike D’Amato claiming that “early on the citizens were locked out of that process” and that “we now have an alderman who’s willing to work with us which is different than the last time”.  She then characterized the RiverView site as “parkland” and although some of the site was zoned “park”, this was misleading as the site was in fact a contaminated brownfield.  These accusations and mis-characterizations did little to add to the discussion and took away from the groups efforts. Ann Brummitt, Coordinator of the Milwaukee River Work Group, spoke about the group’s concerns with the development occurring within the primary environmental corridor along the Milwaukee River.  To alleviated these concerns the group was involved in the creation of the The Milwaukee River Greenway Corridor Interim Study Overlay District (“MROD”) and are pushing for building restrictions along the top of the bluff.  Specifically they want a 50 foot setback from the top of the bluff with a 45 foot height limitation on new construction.  She expressed that the Milwaukee River Work Group’s interest in the UWM dorm project concerns the possibility of development encroaching in to the “view-shed” along the river. Alderman Kovac took the opportunity to gather community input on a variety of topics related to UWM.

As the only question that found consensus didn’t relate to this RFP, these questions emphasized the difficulty of projects like this and that rarely will you obtain agreement on a specific design or location.  Despite Alderman Kovac’s assertion that he didn’t intend to get into specific locations, Sura Faraj presented a list of rumored possible sites. 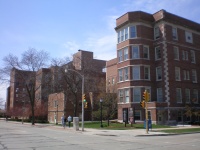 When the discussion turned to the reuse of the soon to be vacant Columbia St. Mary’s Hospital, Alderman Kovac reminded the audience that “we can’t just be against dorms we need to be for something”.  Additionally he pointed out that Columbia St. Mary’s Hospital and the Maryland Avenue School site won’t be part of this RFP because UWM intends for this dorm to open prior to these sites becoming available.  The discussion didn’t get to far into specifics of each site as was Alderman Kovac’s hope but as this process moves into the next phase the debate is sure to heat up. If you’d like to weigh in on the list of sites, please leave a comment.