This letter was sent to lobbyists from the State of Wisconsin Ethics Board. Seems like somebody is messing around with Rep. Jeff Stone‘s campaign identity.

From: Wisconsin Ethics Board [mailto:Ethics@ethics.state.wi.us]
Sent: Wednesday, May 04, 2005 3:40 PM
To: Lobbyists Wisconsin (E-mail)
Subject: MESSAGE FROM THE ETHICS BOARD: re: Solicitation for the People to People Ambassador Program 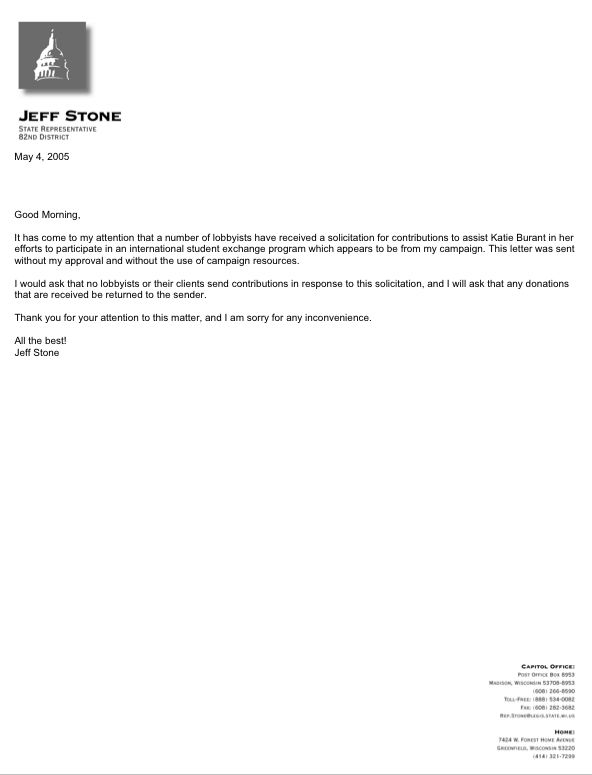 Shoot Out At Passion

Last week, quite by chance, we mentioned that Passion Night Club is owned by Rep. Leon Young, who holds 90 per cent of the shares of the bar. Then, Sunday morning, came the stunning news that gunfire had erupted in the club early that morning, injuring two, and setting off a stampede that contributed to several automobile accidents, including one with a police squad responding to the scene.

Rep. Young has had no comment on either his ownership of the place or his reaction to the shooting, and the media has complied by not mentioning the connection, which could be argued is significant.

Anne E. Schwartz of the Milwaukee Police Department said Monday that she was not aware that Young, a former Milwaukee police officer, was the owner of the business. She did say that perhaps more than one suspect is wanted in connection with the shooting. Evidence at the scene, she says, tends to point to more than one weapon being involved. The shooting involved the classic story of a bouncer evicting a troublesome patron, who then returned to shoot the place up. (If you are ever in a tavern when a patron is thrown out, self preservation might dictate that you leave yourself.)

Whatever, Passion seems to be out of control, and if the building at 200 E. Washington Street had any neighbors, you could be sure they’d object to the tavern’s license, as would the police department. There have been times in the past where similar incidents have led to the closing of other bars. We’ll see if Passion is special.

Valley Gets it Fill

Buried in an announcement that Palermo’s Pizza would be “the first business to locate in the 140-acre site formerly known as the Milwaukee Road Shops,” is news that “much of the soil from the Marquette Interchange project will be trucked down to the Valley and added to top off areas of the business park. Mayor Barrett said this will save state taxpayers on the costs of hauling the dirt elsewhere, as it aids in the redevelopment of the Valley,” according to the city’s news release on the pending project.

Interestingly, CMC Heartland Partners, the successor to the Milwaukee Road, and the firm which sold the land to the city tried unsuccessfully for many years to get a city permit to add fill to the very same site. The fill almost certainly would have added value to the property when the firm sold it to the city, which may give us an idea of why the city refused to issue permits for fill at the time.

CMC Heartland Partners is now in the process of transforming itself, since most all of the old railroad property has been disposed of, but odds and ends from the firm’s past turn up from time to time, including some ancient annual reports for the Milwaukee Road. These are expected to be donated to the Milwaukee Road Collection at the Milwaukee Public Library.

Bill Graffin of the Milwaukee Metropolitan Sewerage District says the rain barrel program there is a great success, with more than 1,500 sold. Unfortunately, the checks for about ten per cent of the barrels spent months “misplaced in a folder in somebody’s office,” when they should have been immediately deposited to the district’s account.

An employee of the district, who remains on the job, allowed 137 checks totaling $3151 to languish in a file when they should have been deposited, which they eventually were. (Of the checks, all but two cleared. The employee has promised to make the other two checks good, which they presumably would have been if she had cashed them immediately.)

Graffin blames the problem on the odd nature of the rain barrel business, a minor sideline in the big bucks world of wastewater treatment.

“We have since developed a new procedure. Checks are copied and then immediately taken to the accountant.”

The Milwaukee Metropolitan Sewerage District is the seventh largest sewage system in the United States, although Milwaukee’s population ranking is around twentieth, depending on how you do the count.

The City of Milwaukee used to be proud of its simple address: www.milwaukee.gov, which it recently gave up in favor of the more complicated www.city.milwaukee.gov.

The simple address now links to the Milwaukee Portal, shared by the city and the county, and with a search engine that can access documents on either entity’s sites. The change does not affect the content of the sites – the city’s is still much better than the county’s. However, research by Joseph T. Klein has shown that behind the scenes, it appears the city has gotten a bad deal, since its traffic now is carried by the county’s network, which is demonstrably slower and less dependable than what was originally used. This effort at city-county cooperation may be applauded, but not too loudly, if in fact things have become worse than they previously were. (We have been informed that Milwaukee County will soon purchase additional broadband capacity)

According to Klein, who researched the matter deeply, the networks that the city and the county use are hardly of the caliber that would best serve the community’s needs, especially in times of crisis.

This discussion has entered the public forum with the mayor’s announcement that he plans to ask experts and community members how the city can best cope with potential natural disasters.

Without getting too technical here, Klein suggests a cooperative between the city, county, MATC and Milwaukee Public Schools to share a powerful broadband network which he said would offer multiple redundancies in the event of an emergency – which we can not now do. Klein presented his findings to an ad hoc group of city and county Information Technologies officials on April 27th . Among the big players there were the city’s Chief Information Officer Randy Gschwind and the newly appointed Daniel Popp of the County. (Notably missing were any representatives of the City’s Department of Public Works – the folks who control the city’s infrastructure within their feudal bureaucratic hierarchy.)

Again, without getting too technical, Klein says that by cooperating, the governmental units could effect cost savings and could vastly improve the speed, reliability and redundancy of all users here – and let us not forget the Homeland Security implications, such as the mayor’s task force will soon be studying. Klein notes that public schools should be part of a coopertive network since they are often used as shelters and field hospitals in times of crisis.

By combining, the governmental units will also be able to purchase bandwidth in a much larger pipe than they now do. Also, according to Klein’s analysis, Milwaukee should take advantage of its enviable proximity to Chicago. As he puts it, virtually all broadband providers in the world maintain a presence in Chicago.

Can we get the governments to cooperate in what is a part of the largest potential public improvement project in history? Where the very economic success of a community – or group of communities – may hinge on stable, high-speed Internet access?

Gschwind, the city’s information officer, says it best: “I’ve always said there are no technical problems to cooperation. We have technicians who can figure out the details. The problem is, and always has been political.”

For a more sanguine, if not fanciful take on the Milwaukee situation go to: http://www.governmententerprise.com/showArticle.jhtml?articleID=29116663

Judge Out of House for Night

Life isn’t all gavels and robes for the judges in this state, who must abide by strict rules of ethics, particularly in the political fundraising realm. Judge Chuck Kahn has been a punctilious observer of the rules, which is why you will often see him sitting in his car while his wife pops in for a political fundraiser. I don’t know what he is going to do from 5 to 7:30 p.m. on May 11th , but according to the Code of Judicial Ethics, he better not be at home that night.

Blame the county executive – Dane County Executive Kathleen Falk, that is. She will be the guest of honor at a fundraiser that evening at “the home of Patti Keating Kahn,” on the east side.

Since Patti is the judge’s wife, I asked a few questions of Jim Alexander, a Wisconsin court official familiar with the rules as they pertain to judges.

“Can a judge hold a fundraiser in his or her house?” I asked.

“Generally speaking, the answer is ‘no.’ The spouse can do it, but the judge can’t be at home.”

In Rem season is upon us. That’s the time of year when the city files claims for its delinquent property taxes – nearly 593 of them this time around. Some of the stories are probably quite sad – an elderly widow, perhaps, whose taxes are more than she can afford. Others range from the improbable to the highly questionable.

As an example of the former category, please consider parcels 503 and 504, which bear the addresses, respectively of 122 E. Wells St. and 131 E. Kilbourn Avenue.

The properties, which are public components of the Milwaukee Center, have no assessed value, yet each is listed as owing $460 in taxes for both 2002 and 2003. How can this be? And would the city foreclose on the Milwaukee Center for a couple thousand bucks?

According to Kerry Urban of the City Treasurer’s office, there are indeed no property taxes outstanding on the parcels. However, both properties are assessed fees for Business Improvement District #14, and neither property has paid its assessment, which is why they are on the In Rem list.

Efforts to reach Joe Weirich, the contact for the properties at Badger XIX Limited Partnership, were not immediately successful.

The City of Milwaukee’s list of tax delinquent properties includes one downtown building that is quite deeply behind on its taxes. It is the shuttered Stout Brothers Brewery at 711 N. Water Street, Unit 11. The property, assessed at $735,000 is a whopping $116,409.36 behind in taxes, having not paid a cent in the years 2001-2004 inclusive.

According to the Wisconsin Department of Financial Institutions, Stout Bros., LLC was organized on 5/21/1998 and became delinquent for state purposes on 4/1/2005.

So, are we supposed to feel sorry for a brewpub that went broke?

Probably not. Consider this: Stout Bros. was owned by David Leszczynski, who also operates O’Danny’s Pub, 1213 N. Water St., and the adjacent Oak Barrel at 1209 N. Water St. The Oak Barrel’s taxes are current, on the installment plan, while O’Danny’s are some $11,731.36 delinquent.

Last July Leszczynski announced that he had spent $2.5 million to purchase the streamlined building at 606 W. Wisconsin Avenue that he is converting into 70 condominiums.

That building is assessed at $1,946,000, less than Leszczynski paid for it when he bought it from Towne Realty (as if Joe Zilber ever lost a dime in a deal.) He also is delinquent $39,696.83 for that building, which is a lot of beers. Better finish up the condos and sell a few, wouldn’t you say?