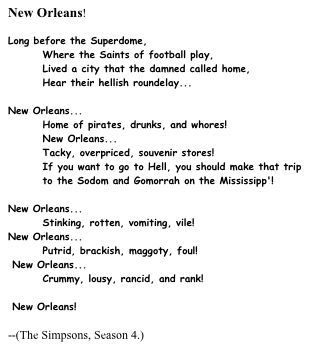 The Simpsons’ producers eventually apologized to the citizens of New Orleans for the lyrics in the song reproduced here. It wasn’t so much the accuracy of the comments as it was their intemperateness.

I had the opportunity to spend the 11th through the 14th of April in New Orleans as one of about 600 honorees and guests at the Washington Mutual “Front Line” celebration honoring high achievers of the nation’s largest savings and loan.

Although you wouldn’t know it, WaMu (as it is styled) employs over a thousand workers in Milwaukee, all performing various back office functions. (The firm, which opens about one new branch – called “store” – per working day, does not have retail operations in Wisconsin – yet.)

I was the guest of my brother, Jim Horne, one of about six people from the Milwaukee staff to be recognized.

The Monday – Thursday gathering turned out to be a blur of official and unofficial events in the Crescent City.

We arrived Monday afternoon at the Fairmont Hotel, an 1890’s hostelry made famous in the book “Hotel,” one of many written in this city that has counted such notable figures as Tennessee Williams and Truman Capote among its residents.

A poolside reception was moved indoors that evening, and the massed crowd, dressed quite casually (banks have changed ever so much over the years) mingled with themselves and with high bank executives. The average age was at the most in the early thirties, and the workers, from around the country, but particularly in the west and northwest, was a fascinating mixture of cultures and races. Some younger tellers, brought their best friends; a number of others brought their husbands or wives, and there were quite a good number of same sex couples. Ours was apparently the only sibling pairing, but a branch manager from Las Vegas brought her daughter.

The bank provided the beer, wine and food for the event, and you could pose for pictures with alligators, if you so chose. (We chose not.)

After that some of us went to bed – especially those who had had a few hours at loose ends during the afternoon.

Others, including bank president Mike Amato took to the streets, where he encountered a group of Milwaukeeans at a tavern, and proceeded to spend a couple of hundred bucks hitting the town and drinking with them.

The next morning, at the mandatory business meeting (even guests had to attend), the first thing Amato did was to give a shout out to the audience.

Amato had been familiar with the drink Hurricane, but the Milwaukeeans introduced him to a new one.

“I can handle the Hurricanes,” he said, “but those Hand Grenades are dangerous stuff.”

Amato let it be known that the Milwaukeeans, who had held their own in a notoriously bibulous city, were to be admired for their party-hardiness.

This may have shocked the conventioneers from the less intemperate parts of the country, but it gave the Milwaukee contingent a certain éclat that remained for the week. We’re just born social leaders.

The next days included a few scattered corporate events, like a formal recognition ceremony for the winners. I dressed in a tuxedo, and practically blended in with the waiters.

Most of the rest of the time was spent in wandering the streets of this ancient and most European of American cities.

I rented a bicycle to extend my range beyond the French Quarter, and covered every street in that quaint, if decrepit district.

New Orleans is below sea level, and is protected by levees from the floods of the Mississippi. It relies on an extensive system of open drainage ditches, the contents of which are pumped into the river.

God knows what the point-source pollution there is, but the city is essentially an open sewer. Even in April with its relatively-mild (below 80 degrees) temperatures, a festival of odors assaulted the nose. It must be truly remarkable in the summer. The sidewalks are made of various materials, laid down over the centuries, and mostly ignored since then. Brick walks would be crumbling, or missing blocks, and the same is true of the slate sidewalks.

The city is littered with historical markers, including a number of plaques set into the walks commemorating the 1980 sidewalk improvements of Mayor Ernest Morial. If the mayor had spent the taxpayers’ money on concrete rather than memorializing himself in bronze, it would have been better spent – but hardly as historic.

And this is a city that treasures the historic. The French Quarter is one of America’s first historic preservation districts, and the Vieux Carre Commission, established in 1933, regulates all construction in the district. Materials, construction methods and even paint colors must be authentic to the buildings, although it should be said that most buildings have not seen a paintbrush in our lifetimes, and look it.

One building, known as Madame John’s Legacy, constructed in 1788, particularly caught my attention. There was something different about it – something shimmering.

Then I saw another bronze plaque that explained it all – the State of Louisiana painted the place in 1998, and there was the governor’s name to prove it.

At last! A building that had been painted as recently as the 20th century.

The ever-fluid masthead of the Shepherd Express changed again this week with the deletion of the name of Catherine M. Nelson, who had reigned as the paper’s grandly-titled “Associate Publisher and Chief Financial Officer.”

Last year Nelson added to her responsibilities as the Publisher of Core Weekly, a Madison freebie now in its 34th issue.

Calls to Nelson’s extension at the Shepherd were answered by owner Louis Fortis, who has had a goodly number of titles at the paper himself. Fortis, the “Publisher and Editor-in-Chief” would only say that Nelson was no longer working for the organization. He would not say that she was fired.

News spread quickly in Shepherd circles, and a number of former employees of the paper – most or all of whom had been fired by either Fortis or Nelson, celebrated with drinks at Swig. It was said to be one of the most joyous occasions in the history of Milwaukee journalism.

Nelson came to Milwaukee at Fortis’ behest from Pittsburgh. She immediately expanded the advertising lineage of the paper and worked steadfastly to see that its editorial content became skewed toward advertiser-friendly fluff stuff. Noize, Dig and other Shepherd changes have come under her watch, although not all of her initiatives were successful. Some cost the paper dearly, for which Ms. Nelson usually retaliated by firing an underling.

Nelson had an aloof personality and a lack of communicativeness that is endemic in the higher levels of Milwaukee’s newspapers. How well she is doing at Core Weekly is difficult to tell from this remove. However, at the time of the paper’s announcement, which you read here first locally at milwaukeeworld, she indicated that the internet would be an important component of Core. A recent visit to the paper’s website shows very little content other than an explanation that more content is forthcoming.

This bit of good news comes from an Indiana reader whose letter we printed recently. In it she lamented that she, like so many others, had bought fake prints from United States Liquidators, a traveling auction firm that we warned you about in November 2004. This letter is Lori Reblein of Indiana.

If you have any leads as to the current location of the peripatetic United States Liquidators, please feel free to contact horne@milwaukeeworld.com .

Thank you so much for printing my letter on your site. Since then Visa has
reversed the charges on our credit card due to our proof that they were in
fact “Fakes”. It cost us over $400.00 to ship them back as the company still
refuses to take our calls or certified mail. We are hoping they do not refuse
shipment as we will then incur another $400.00 to pay the shipping company
for the return. They ironically, sent us a card indicating that they are
having another auction at the same Indianapolis location. I guess they still
consider us “Good Customers” We are continuing our work with the Indiana
Attorney General, the BBB and the FTC to protect other consumers. If you have any
other additional information or contacts that would better help us, please
let us know

Ozaukee County Democratic Party awards leadership training scholarship to Homestead student Ben Halbert. The Ozaukee County Democratic Party has presented Mequon Homestead High School senior Ben Halbert with a scholarship to attend the 2005 Wisconsin Democratic Leadership Institute.The Democratic Leadership Institute prepares Democratic activists from across Wisconsin for upcoming election campaign work. For student leaders and first time activists this is an opportunity to learn organizational skills that will help them to effectively participate in the political process, ultimately in a leadership position. For long time activists and local party officers it is an opportunity to network with other activists from around the state, learn about changes in campaign law, and meet some of the Democratic candidates and staff they will be working with in the upcoming elections. Over 800 young adults have participated in the DLI in the past decade.The 2005 Democratic Leadership Institute was held this past weekend April 9-10 at Devil’s Head Resort in Merrimac, WI. Featured speakers included Wisconsin Governor Jim Doyle and US Congresswoman Tammy Baldwin.
.
The Ozaukee County Democratic Party holds monthly meetings that are open to anyone interested in supporting Democratic politics at 7PM on the 3rd Tuesday of each month on the lower level of the Cedarburg City Hall at W63 N645 Washington Avenue. The next meeting will be on April 19.

The 118th Anniversary of the 1886 Bay View Tragedy will be commemorated at 3 p.m., Sunday, May 1, 2005, at the Bay View Historical Marker Site at S. Superior St. and E. Russell Ave., about one-half mile from the south end of the Hoan Bridge on Milwaukee’s lakefront.

The event has become a tradition and more than 200 are expected to attend the event which has been held annually since 1986 to remember the incident on May 5, 1886 when the state militia fired upon several thousand workers marching for the 8-hour day, killing seven. The event is co-sponsored by the Wisconsin Labor History Society and the Bay View Historical Society.

Tim Buban, principal officer of the 5,000-member Teamsters Local 200, will speak, linking the struggles of workers in 1886 to those of the present day.

The program will include a remarks from former Mayor Frank P. Zeidler, County Supervisor Marina Dimitrijevic, songs from folksinger Larry Penn, other dignitaries and the laying of the commemoration wreath.

Following the event, many in the audience meet at Puddler’s Hall, at 2731 S. St. Clair St., which was built in 1873 as a union hall and often served as a community center for Bay View.

The tragedy was the deadliest in Wisconsin labor history. Some 1,500 workers, carrying signs in support of the 8-hour day, approached the Rolling Mills, then Milwaukee’s largest employer. Not hearing orders to halt, they were fired upon by the militia, and the deaths resulted.

Further information may be obtained from Ken Germanson, president of the Wisconsin Labor History Society, at 449-4777.