WMSE’s Big Band Grandstand returns to the Turner Hall Ballroom on Saturday, Dec. 12 at 4 p.m. Now in its 7th year, this event has become a holiday tradition that’s fun for the whole family. The Big Band Grandstand is presented annually by Bob and Jenny Hillis in honor of Bob and Genie Friedman.

The evening kicks off when WMSE DJ Dewey Gill – the man himself – welcomes guests with a special hand-selected DJ set. The Chicago Jazz Orchestra then takes the stage with a special salute to Woody Herman, a local jazz legend.

Over the course of a career that lasted half a century, Herman led a succession of ensembles – generally calling each one his ”Thundering Herd” – in a wide spectrum of popular music from blues to bop to rock and beyond. The songs most closely associated with Herman include ”Woodchoppers’ Ball,” ”I’ve Got the World on a String,” ”Apple Honey,” ”Summer Sequence,” ”Four Brothers,” ”Caldonia” and the group’s theme song, ”Blue Flame.” Herman conducted the band, played clarinet and saxophone, and sang in a light baritone voice that was warm and musical and slightly bluesy.

There also will be a silent auction that will go live online two weeks prior to the event and includes exciting items like a Green Bay Packers vs. Minnesota Vikings package. Monies raised from the Big Band Grandstand will support the upkeep of WMSE’s studios, and the digitization and streaming of the station’s jazz library, allowing music fans everywhere the ability to hear jazz 24 hours a day, seven days a week.

“Big Band Grandstand is the visually and sonically stunning event of the year. We couldn’t be more excited to continue our mission especially by celebrating hometown legend Woody Herman. WMSE will continue to be your home for jazz in Milwaukee,” said Tom Crawford, WMSE station manager. “With Tuesday morning’s ‘Free Jazz Barbeque’ with Dr. Sushi, ‘Sunday’s Big Band Show’ with Dewey Gill, and our 24/7 jazz stream, we’ve got you covered.”

Grab your best guy or doll (fancy dress is encouraged) and come on down to the Turner Hall on Saturday, Dec. 12 at 4 p.m. for a big band night of fun. Tickets are on sale now at 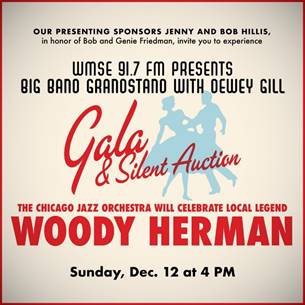