Each month a new film will be announced. 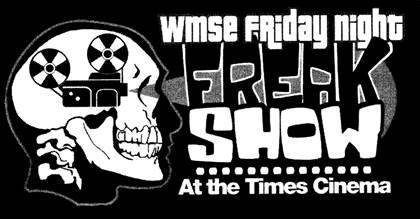 After a 10-year hiatus, we are thrilled to announce the return of the monthly movie series, “The Friday Night Freak Show” to the Times Cinema.

“The culture of cinema especially cult films runs deep in Milwaukee. WMSE’s Friday Night Freak Show is back and better than ever. The long history we share with the Times Cinema makes this more than perfect. We plan on making each movie an event with music and film and WMSE DJ’s,” stated WMSE General Manager, Tom Crawford.

Mark Strube, promotions specialist at Times Cinema says, “We are thrilled to bring the beloved tradition of the Friday Night Freak Show back to our neighborhood. Over the years, many customers have asked us if the FNFS would be returning one day. We heard you, and we’re excited to say, that day is here.”

WMSE has put a new spin on the original series by asking different DJs to share a favorite movie. And instead of the traditional midnight showing, the event will start at 8 p.m., which gives DJs a chance to spin and explain their film choices.

“The Friday Night Freak Show” will kick off on Friday, Aug. 19. DJ Marty from Tuesdays with Marty presents, “Easy Rider.”  Known for its soundtrack and as the defining movie of the counter-culture of the 60s, Marty refers to “Easy Rider” as the “ultimate buddy film.” Marty will welcome guests with a record spin and then introduce the film.

Each month a new film will be announced, so be sure to keep it tuned to WMSE and check our website, wmse.org.