“Paul Ryan, Kill Your Bill before It Kills Us!” 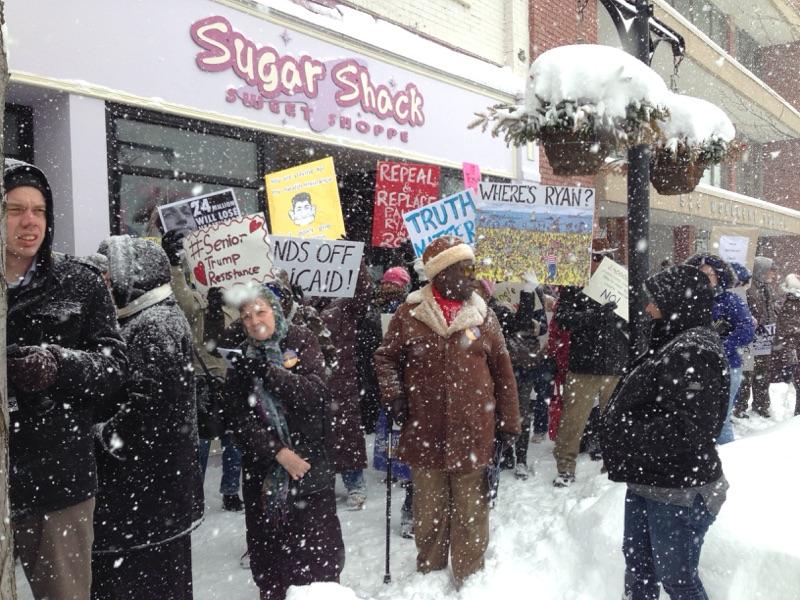 “Paul Ryan, Kill Your Bill before It Kills Us!” Photo courtesy of Citizen Action of Wisconsin.

RACINE, WI – In the wake of a Congressional Budget Office analysis that the GOP health plan will cause 24 million Americans to lose their health coverage, 250 people from Illinois and Wisconsin braved a blizzard and bitter temperatures outside Speaker Paul Ryan’s office here Tuesday to demand he drop his ruthless health care repeal plan.

Seniors and activists from Fair Economy Illinois and the Jane Addams Senior Caucus converged with members of Citizen Action of Wisconsin (all People’s Action organizations), with SEIU Healthcare Wisconsin and the Wisconsin Alliance for Retired Americans.

Protesters marched from Monument Square on Main Street to Paul Ryan’s office with lunch – cans of dog and cat food – the kind of lunch seniors who won’t be able to afford food, housing, and health care under Ryan’s ruthless repeal expect they will soon face. Speakers shared stories and fears of living without health insurance.

Reggie Griffin, a Chicago retiree who traveled to Racine, is in his 70s and works as a home caregiver to make ends meet. He would be devastated by the defunding of Medicare in the repeal bill because of chronic health conditions.

“I want to live a life of dignity,” said Griffin. “There are some members of Congress, like Speaker Paul Ryan, who think I don’t deserve to live with dignity.”

As president-elect, Trump promised “insurance for everybody.” It’s now clear he lied, and along with Ryan, is trying to sneak the plan through on a fast-track in the dead of night.

“This is a huge test for our democracy, because the Republican repeal can’t survive once the people understand it’s true implications,” said Robert Kraig, executive director for Citizen Action of Wisconsin.

Ryan’s bill repeals the Affordable Care Act and guts Medicaid – in place for more than 50 years.

“This attack on seniors and families will devastate Midwest communities. It is irresponsible and ruthless,” said Anna Marin, manager of civic engagement for the Jane Addams Senior Caucus.

One of the speakers at today’s action, Tammy Wolfgram, is a small business owner from Hartland, Wisconsin. Before the passage of the Affordable Care Act, Wolfgram, her husband, and her daughter could not find any health insurance company that would sell them coverage because all three had pre-existing conditions.

They struggled to afford costly insurance with high deductibles on Wisconsin’s high-risk pool, a failed approach to covering people with pre-existing health conditions that the GOP plan adopts.

“If ACA is repealed, I don’t know what we will do,” Wolfgram said.

A report by the Congressional Budget Office released on Monday shows that 14 million people will lose their insurance coverage by next year, and 24 million will be out in the cold by 2026.

“Anyone who believed GOP promises that people would still have health insurance under the Republican repeal plan now know that they were lied to; they are going to be left out in the cold,” said LeeAnn Hall, co-director of People’s Action and executive committee member of Health Care for America Now (HCAN).

“The House must halt further action on this irresponsible bill immediately,” Hall said.

People’s Action is a national organization of more than a million people across 30 states working for economic, racial, gender and climate justice – and to ensure everyone a voice in our political system.