WILL on K-12 School Report Cards

The report cards include two major changes from previous years: the full inclusion of private schools in the choice programs and the use of student growth as a metric for school performance.

November 21, 2017 – Milwaukee, WI – Today the state released the mandated K-12 school report cards for 2016-2017. The report cards include two major changes from previous years: the full inclusion of private schools in the choice programs and the use of student growth as a metric for school performance.

Will Flanders, Ph.D., Research Director at WILL, offers this comment on the report cards:

Flanders was able to create an even playing field, controlling for each schools’ differences, including race, economic status, English language learners, enrollment, and school type. This means that the reported results are in the aggregate, and not claims about the performance of every school in the sector. Further analysis may reveal that high performing choice and independent charters had much more robust growth advantages than the average of all such schools. The report cards yield two important results:

1.     Student growth is significantly higher, on average 8%-24% higher, in private and charter schools when compared to traditional public schools.

Student growth is one of the most important measurements for school success. Particularly in large, urban areas like Milwaukee, students often enter the classroom several grade levels behind where they would be expected to be. Growth scores account for factors that tend to slow student progress (such as poverty and whether the student is an English language learner), and credits schools for exceeding these predictions. 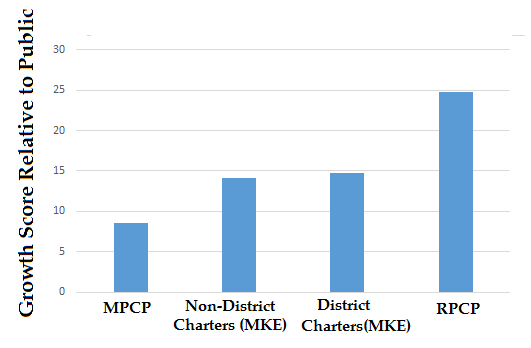 2.     Student proficiency is significantly higher, on average 4%-11% higher, in private schools in the choice programs and public charter schools when compared to traditional public schools.

The other major component of the report card related directly to academic achievement is the proficiency rate. This represents the percentage of students in the school who scored proficient or above on the Forward Exam in Mathematics or English/Language Arts.  Previous research by WILL has found higher proficiency rates in the MPCP and charter schools relative to MPS, and this year’s results are no different.

Figure 2 below depicts the proficiency rate in mathematics for students in Milwaukee’s choice and charter sector relative to MPS. Once again, all relevant controls were included in the analysis. 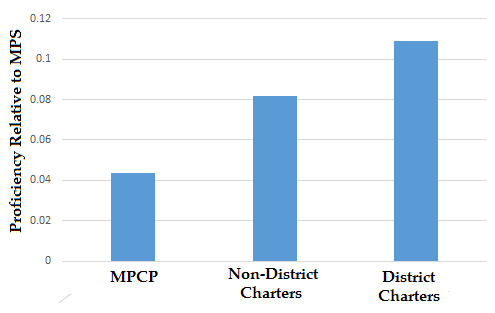 “School choice offers children a number of benefits including a safer environment and religious teachings. But the newest school report card results make clear that families in Wisconsin don’t have to sacrifice educational quality to get those other benefits for their kids. The ball is now in the court of policymakers in Madison to keep expanding school choice so that more children in Wisconsin can take advantage of these successful programs.”